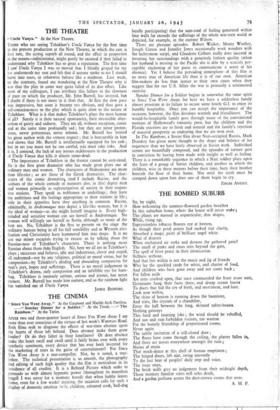 How welcoming the summer-flowered garden breathes In this suburban home, where the house will never wake; The. plants are massed in unparticular, dim shapes, While, rising up, Expressionless tobacco flowers eye at heaven, As though their petal points had sucked star clarity, Absorbed a magic paint of brilliant angel white.

What of disaster When enchanted air reeks and drowns the gathered pain?

The smell of pinks and roses stirs beyond the gate, The spell of fever peace in their intoxication.

And that fret within is not the music and jig of friends Who lay the speckled cards for whist, and chatter of food, And children who have gone away and not come back ; For fallen aside Are urns cracked open, that once commanded the front stone stair, Geraniums hang their faces there, and droop cream leaves To doors that hid the cry of birth, and merriment, and- hate.

Look now within, The shine of heaven is running down the bannister, And stars, like crystals of a chandelier, Enter the hall between the long, skinned rafter-beams.

Nothing gainsays This hard and taunting joke ; the wind should be rebuffed, And sun and rain forbidden visitors, too wanton For the homely friendship of preportioned rooms.

Never again The subtle invitation of a still-closed door ; The floors have come through the ceiling, the plaster fallen And there are noises everywhere amongst the ruin ; Noises of strain That mock-dance at this shell of human emptiness ; The hinged doors, left ajar, swing unevenly To the lost beat of peoples' daily step and voice.

The issue stays, The brick walls give no judgement from their midnight depth, Those memory familiar stairs still echo death,

And a garden perfume scents the dust-strewn rooms that were.