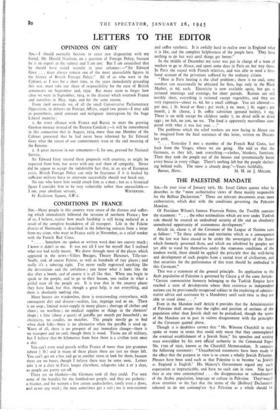 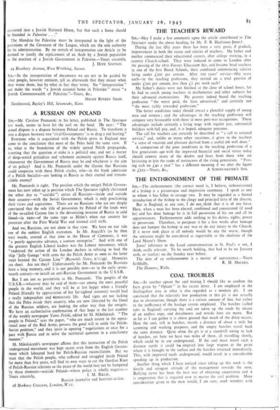 SIR,—In your issue of January 59th, Mr. Israel Cohen quotes what he describes as the "more authoritative views of those mainly responsible for the Balfour Peclaration." There are relevant documents even more authoritative, which deal with the conditions governing the Palestine Mandate.

Of President Wilson's famous Fourteen Points, the Twelfth contains the statement: ". . . the other nationalities which are now under Turkish rule should be assured an undoubted security of life and an absolutely unmolested opportunity of autonomous development."

Article 22, clause 1, of the Covenant of the League of Nations runs as follows: "To those colonies and territories which as a consequence of the late war have ceased to be under the sovereignty of the States which formerly governed them, and which are inhabited by peoples not yet able to stand by themselves under the strenuous conditions of the modern world, there should be applied the principle that the well-being and development of such peoples form a sacred trust of civilisation, and that securities for the performance of this trust should be embodied in this Covenant."

That was a statement of the general principle. Its application to the Arab populatibn of Palestine is governed by Clause 4 of the same Article: "Certain communities formerly belonging to the Turkish Empire have reached a state of development where their existence as independent nations can be provisionally recognised subject to the rendering of adminis- trative advice and assistance by a Mandatory until such time as they are able to stand alone. . . ."

Even in the Mandate itself Article 6 provides that the Administration of Palestine shall ensure that the rights and position of sections of the population other than Jewish shall not be prejudiced, though the terms of the Mandate are in part in violent disagreement with the principles of the Covenant quoted above.

Though it is doubtless correct that "Mr. Winston Churchill in 1920 spoke or wrote in terms that could only mean that they contemplated the eventual establishment of a Jewish State," his speeches and writing were overridden by his own official authority in the Command Paper No. i7oo of 1922, known as the Churchill Memorandum. It contains the following statement: "Unauthorised statements have been made to the effect that the purpose in view is to create a wholly Jewish Palestine. Phrases have been used such as that Palestine is to become 'as Jewish as England is English.' His Majesty's Government regard any such expectation as impracticable, and have no such aim in view. Nor have they at any time contemplated . . . the disappearance or subordination of the Arabic population, language or culture in Palestine. Theyywould draw attention to the .fact that the terms of the [Balfour] Declaration referred to do not contemp'ate that Palestine as a whole should be converted into a Jewish National Home, but that such a home should be founded in Palestine . . ."

The Mandate for Palestine must be interpreted in the light of the provisions of the Covenant of the League, which are the sole authority for its administration. By no stretch of interpretation can Article 22 be deemed to justify the replazement of an Arab by a Jewish population or the erection of a Jewish Government in Palestine.—Yours sincerely, J. HOPE SIMPSON. 2.4 Rosebery Avenue, West Worthing, Sussex.