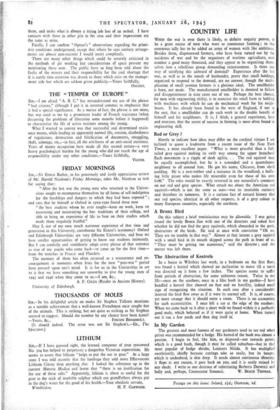 FRIDAY MORNINGS SIR,—Sir Ernest Barker, in his generously and justly

"After the last war the young men who returned to the Univer- sities sought to recompense themselves by all forms of self-indulgence for the hardships and dangers to which they had been exposed " ; and says that he himself at Oxford in 1919-1920 found these men "the best students whom he ever taught—keen on work, keen on recovering and maintaining the besr traditions of their college, and able to bring an experience of life to bear on their studies which made them singularly fruitful."

May I, out of my own much narrower experience of that time and generation in this University, corroborate Sir Ernest's testimony? Oxford and Edinburgh Universities are very different Universities, and here we have smaller opportunities of getting to know our students intimately. But I can cordially and confidently adopt every phrase of that sentence as true of my pupils who came back—or came up for the first time— from the trenches in France and Flanders The memory of them has often recuried as a reassurance and en- couragement at moments when fears for the next " post-war " period have pressed upon one's mind. It is for us in the Universities to see to it that we have something not unworthy to give the young men of 1945 and 1946 when they come to us.—! am, &c.,