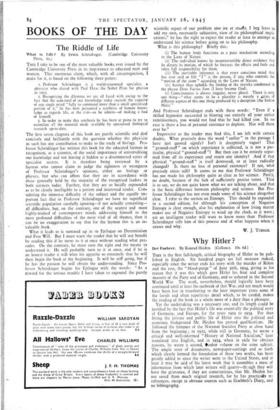 The Riddle of Life

THIS I take to be one of the most valuable books ever issued by the Cambridge University Press in its importance to educated men and women. This enormous claim, which, with all circumspection, I make for it, is based on the following three points: I. Professor Schrodinger is a world-renowned specialist, a physicist who shared with Paul Dirac the Nobel Prize for physics in 5933.

2. Recognising the dilemma we are all faced with owing to the fact that the sum-total of our knowledge today exceeds the capacity of any single mind "fully to command more than a small specialised portion of it," he has here presented a synthesis of human know- ledge as regards life, at the risk—as he admits—of making a fool of himself.

3. In order to make this synthesis he has been at pains to try to assimilate all the material made available by specialised biological research up-to-date.

The first seven chapters of this book are purely scientific and deal concisely and brilliantly with the question whether the physicist as such has any contribution to make to the study of biology. Pro- fessor Schrodinger has written this book for the educated layman in recognition, as a scientist, of the social importance of universalising our knowledge and not leaving it hidden as a disconnected series of specialist secrets. It is therefore being reviewed by a layman who cannot claim to judge the rightness or wrongness of Professor Schrodinger's opinions, either on biology or physics, but who can affirm that they are in accordance with those generally held by the majority of the recognised leaders in both sciences today. Further, that they are so lucidly expounded as to be clearly intelligible to a patient and interested reader. Con- sidering the immense difficulty of the subject and the equally im- portant fact that in Professor Schrodinger we have no superficial scientific populariser carefully ignoring—if not actually concealing— all difficulties, but, on the contrary, one of the acutest and most highly-trained of contemporary minds addressing himself to the most profound difficulties of the most vital of all themes, then it can be no exaggeration to say that for the layman this is an in- ‘aluable book.

What it leads to is summed up in an Epilogue on Determinism and Free Will. But I must warn the reader that he will not benefit by reading this if he turns to it at once without reading what pre- cedes. On the contrary, he must earn the right and the means to understand it. He will probably turn to it at once, and if he is an honest reader it will whet his appetite so extremely that he will then begin the book at the beginning. It will be stiff going, but if he has the passion he will obtain the understanding. Since Pro- fessor Schradinger begins his Epilogue with the words: "As a reward for the serious trouble I have taken to expound the purely scientific aspect of our problem sine ira et mato, I beg leave to add my own, necessarily subjective, view of its philosophical impli- cations,v he has the right to expect the reader at least to attempt to understand his science before going on to his philosophy.

What is this philosophy? Briefly this:

(i) The human body functions as a pure mechanism according to the Laws of Nature.

(ii) The individual knows by incontrovertible direct evidence that he directs its motion, of which he foresees the effects and feels and takes full responsibility for them.

(iii) The inevitable inference is that every conscious mind that has ever said or felt " I " is the person, if any, who controls the "motion of the atom" according to the Laws of Nature. (iv) Science thus upholds the finding of the mystits condensed in the phrase Deus Factus Sum (I have become God).

(v) Consciousness is always singular, never plural. There is only one thing—" what seems to be a plurality is merely a series of different aspects of this one thing produced by a deception (the Indian Maja)."

And Professor Schrodinger ends with these words: "Even if a skilled hypnotist succeeded in blotting out entirely all your earlier reminiscences, you would not find that he had killed you. In no case is there a loss of personal existence to deplore. Nor will there ever be."

Impressive as the reader may find this, I am left with certain doubts. What precisely does the word "earlier" in the passage I have just quoted signify? Isn't it deceptively vague? That " ground-stuff " on which experience is collected, is it not a par- ticular, physical " ground-stuff "? But then can it be entirely separ- ated from all its experience and retain any identity? And if that physical " ground-stuff " is itself destroyed, or at least radically changed? Is there no loss of personal existence? If not, what precisely exists still? It seems to me that Professor Schrodinger has not made his philosophy quite as clear as his science. Partly, no doubt, because of the lack of sufficiently precise terms. That is to say, we do not quite know what we are talking about, and that is the basic difference between philosophy and science. But Pro- fessor Schrodinger has not even made some of his science altogether clear. I refer to the section on Entropy. This should be expanded in a second edition, for although his conception of Negative Entropy is clear enough, also his explanation of how living matter makes use of Negative Entropy to wind up the clock, as it were; yet an intelligent reader will want to know more than Professor Schrodinger tells him of this process and of what happens when it ceases and why.