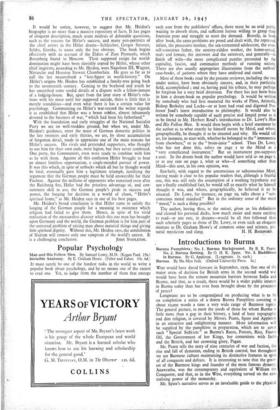 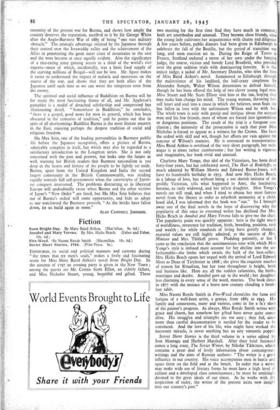 WHO would have dared forecast in September, 1939, that one of the major areas of decision for British arms in the second world war would have been the remote mountain barriers between India and Burma, and that, as a result, there would be a wider public interest in Burma today than has ever been brought about by the processes of peace? Longmans are to be congratulated on producing what is to be on completion a series of a -dozen Burma Pamphlets covering at about ro,000 words a time a very wide range of Burmese topics. The general picture, to meet the needs of those for whom Burma is little more than a gap in their history, a land of hazy topography and dim religion, is covered by Messrs. Pearn, Spate and Appleton in an attractive and enlightening manner. More information will be supplied by the pamphlets in preparation, which are to cover such "Special Subjects" as Burma's Races, Forests, Rice, Fauna, Oil, the Government of her Kings, her connexions with India and the British, and her crowning glory, Pagan. Mr. Peam tells the story of nine centuries of war and faction, the rise and fall of dynasties, ending in British eonmol, but throughout we see Burmese culture maintaining its distinctive features in spite of all conquests and defeats. It is interesting to note that the great- est of the Burmese kings and founder of the most famous dynasty, Anawratha, was the contemporary and equivalent of William the Conqueror, and that, as in the West, everything turned on the cen- tralising power of the monarchy.

Mr. Spate's narrative serves as an invaluable guide to the physical enormity of the present war for Burma, and shows how amply the country deserves the reputation, ascribld to it by Sir George White after the Anglo-Burmese War of 1885 of being "one vast military obstacle." The strategic advantage enjoyed by the Japanese through their control over the Irrawaddy valley and the achievement of the Allies in penetrating the great outer crust of mountains to the east and the west become at once equally evident. Also the significance of a rice-eating army gaining access to a third of the world's rice exports—most of which, incidentally, was a basic food supply of the starving millions of Bengal—will not be lost. Mr. Spate makes it easier to understand the impact of malaria and monsoons on the course of the war, and shows that they are both allies of the Japanese until such time as we can wrest the temperate zone from the enemy.

The spiritual and social influence of Buddhism on Burma will be for many the most fascinating theme of all, and Mr. Appleton's pamphlet is a model of detached scholarship and compressed but illuminating detail. "Somewhere in Buddhism," he concludes, "there is a gospel, good news for men in general, which has been obscured in the centuries of tradition," and he points out that in spite of all shortcomings Buddhist Burma is the most literate country in the East, enjoying perhaps the deepest tradition of social and religious freedom.

Ma Mya Sein, one of the leading personalities in Burmese public life before the Japanese occupation, offers a picture of Burma, admirably complete in itself, but which may also be regarded as a satisfactory introduction to the Longman series. She is not only concerned with the past and present, but looks into the future as well, warning her British readers that Burmese nationalism is too deep in the hearts and history of the people to be lightly set aside. Burma, apart from the United Kingdom and India the second largest community in the British Commonwealth, was striding rapidly towards full self-government when the catastrophe of Japan- ese conquest intervened. The problems distracting us in liberated Europe will undoubtedly recur when Burma and the other victims of Japan's "New Order" are freed, but Ma Mya Sein believes that out of Burma's ordeal will come opportunity, and bids us adopt as our watchword the Burmese proverb, "As the bricks have fallen down, let us build again in stone."