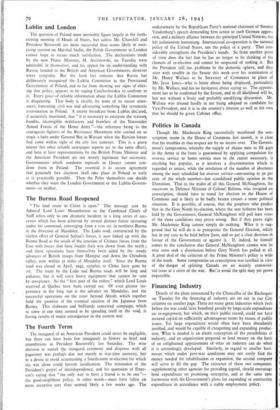 Though Mr. Mackenzie King successfully weathered the con- scription storm in the House of Commons last month, it is clear that his troubles in that respect are by no means over. The Govern- ment's compromise, whereby the supply of 16,0oo men to fill gaps in the Army at the front is guaranteed by applying compulsion for oversea service to home service men to the extent necessary, is anything but popular, as it involves a discrimination which is regarded as unjust, while the revelation of the number of absentees among the men scheduled for oversea service—amounting to 50 per cent, of the whole number—has scandalised public opinion in the Dominion. That in the midst of all this General McNaughton, the successor as Defence Minister of Colonel Ralston, who resigned on conscription, should have to stand for election to the House of Commons and is likely to be badly beaten creates a tense political situation. It is possible, of course, that the prophets who predict that in the Grey North by-election, where the seat hitherto has been held by the Government, General McNaughton will poll least votes of the three candidates may prove wrong. But if they prove right Mr. Mackenzie King cannot simply do nothing. What it is sug- gested that he will do is to precipitate the General Election, which has in any case to be held before June, and so get a clear decision in favour of the Government or against it. If, indeed, he himself comes to the conclusion that General "McNaughton cannot win he may even seek a dissolution before Grey North has polled at all. A great deal of the criticism of the Prime Minister's policy is wide of the mark. Some compromise on conscription was justified in view of the danger of splitting Canada on an acutely controver- sial issue at a crisis of the war. But' to avoid the split may yet prove impossible.