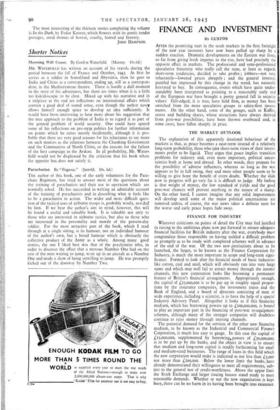 AFTER the promising start in the stock markets in the first fortnight of the new year investors have now been pulled up sharp by a sudden reaction. Dramatic developments on the Eastern war front, so far from giving fresh impetus to the rise, have had precisely the opposite effect in markets. The professional and semi-professional speculative fraternity who really call the tune, at least as regards short-term tendencies, decided to take profits ; jobbers—not very reluctantly—lowered prices abruptly ; and the general investor, puzzled but impressed by this change in the trend, has naturally hesitated to buy. In consequence, events which have quite under- standably been interpreted as pointing to a reasonably early end of the European war have brought a pretty general fall in security values: Gilt-edged, it is true, have held firm, as money has been switched from the more speculative groups to safety-first invest- ments. On the other hand, some of the groups, such as Kaffirs, stores and building shares, whose attractions have always derived from post-war possibilities, have been thrown overboard and, in some cases, have fallen sharply in price.

The explanation of this apparently irrational behaviour of the markets is that, as peace becomes a near-term instead of a relatively long-term probability, those who take short-term views of their invest- ments prefer to be liquid. They argue that peace implies transition problems for industry and, even more important, political uncer- tainties both at home and abroad. In other words, they prepare for the possibility of 'adverse influences, whereas so long as the war appears to be in full swing, they and most other people seem. to be willing to give hope the benefit of every doubt. Whether the slide now in progress will go very far it is difficult to judge. My feeling is that weight of money, the low standard of yields and the good post-war chances will prevent anything in the nature of a slump. On the other• hand, I cannot imagine that any solid improvement will develop until some of the major political uncertainties are removed unless, of course, the war news takes a definite turn for the worse and early peace hopes fade away.

Whatever criticisms on points of detail the City may feel justified in raising to the ambitious plans now put forward to ensure adequate financial facilities for British industry after the war, everybody must congratulate those responsible on having tackled a difficult problem so promptly as to be ready with completed schemes well in advance of the end of the war. Of the two new .institutions about to be launched, the larger, to be known as the Finance Corporation for Industry, is much the more important in scope and long-term signi- ficance. Formed to look after the financial needs of basic industries like cotton, coal and steel, which will obviously run into very large sums and which may well fail to attract money through the normal channels, this new corporation looks like becoming a permanent feature of Britain's financial arrangements. Appropriately enough, the capital of L25,000,000 is to be put up in roughly equal propor- tions by the insurance companies, the investment trusts and the Bank of England, and a board of directors consisting of men of wide experience, including a scientist, is to have the help of a special Industry Advisory Panel. Altogether it looks as if this financing medium, which has borrowing powers up to £100,00o,000, is bound to play an important part in the financing of post-war re-equipment schemes, although many of the stronger companies will doubtless continue to raise money through existing channels.

The potential demand for the services of the other new financing medium, to be known as the Industrial and Commercial Finance Corporation, is much less easy to gauge. In this case the capital of £15,000,000, supplemented by borrowing, powers of £3o,000,000, is to be put up by the banks, and the object in view is to ensure that medium and long-term capital is readily forthcoming for small and medium-sized businesses. The range of loans in this field which the new corporation would make is indicated as not less than ,C5,000 nor more than £200,000. `Below the lower limit the banks.have already demonstrated their willingness to meet all requirements, sub-

ject to the general test of credit-worthiness. Above the upper limit the Stock Exchange and larger issuing houses stand ready to meet reasonable demands. Whether or not the new organisation is kept busy, there can be no harm in its having been brought into existence.