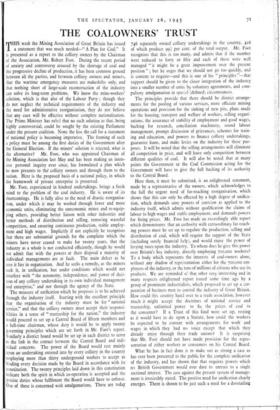 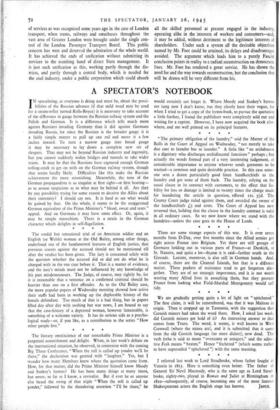 THIS week the Mining Association of Great Britain has issued a statement that was much needed—" A Plan for Coal." It is presented as a report to the colliery owners by the Chairman of the Association, Mr. Robert Foot. During the recent period of anxiety and controversy aroused by the shortage of coal and the progressive decline of production, it has been common ground between all the parties, and between colliery owners and miners, that the wartime emergency measures are makeshifts only, and that nothing short of large-scale reconstruction of the industry can solve its long-term problems. We know the mine-workers' solution, which is that also of the Labour Party ; though they do not neglect the technical requirements of the industry and the need for administrative reorganisation, they do not believe that any cure will be effective without complete nationalisation. The Prime Minister has ruled that no such solution as that, being highly controversial, could be sought by the existing Parliament under the present coalition. None the less the call for a statement of national policy is becoming imperative. The framing of such a policy must be among the first duties of the Government after the General Election.. If the miners' solution is rejected, what is the alternative? Mr. Foot, who was appointed Chairman of the Mining Association last May and has been making an inten- sive personal inquiry ever since, has formulated a plan which he now presents to the colliery owners and through them to the nation. Here is the proposed basis of a national policy, in which the framework of private enterprise is preserved.

Mr. Foot, experienced in kindred undertakings, brings a fresh mind to the problem of the coal industry. He is aware of its shortcomings. He is fully alive to the need of drastic reorganisa- tion, under which it may be worked through fewer and more economic units, eliminating the uneconomic mines and re-equip- ping others, providing better liaison with other industries and better methods of distribution and selling, removing wasteful competition, and ensuring continuous production, stable employ- ment and high wages. Implicitly if not explicitly he recognises that there are substantial grounds for the complaint which the miners have never ceased to make for twenty years, that the industry as a whole is not conducted efficiently, though he would not admit that with the powers at their disposal a majority of individual managements are at fault. The main defect as he sees it lies in organisation. And he seeks a remedy, as the miners seek it, in unification, but under conditions which would not interfere with "the autonomy, independence, and power of deci- sion of any colliery undertaking in its own individual management and enterprise," and not through the agency of the State.

The measure of unification which he proposes is to be achieved through the industry itself. Starting with the excellent principle that the organisation of the industry niust be for "national service," and that the colliery owners must accept their responsi- bilities in a sense of "trusteeship for the nation," the industry would proceed to set up a Central Board of fifteen members and a full-time chairman, whose duty it would be to apply twenty governing principles which are set forth in Mr. Foot's report. Similarly a district board would be set up in each district to serve as the link in the contact between the Central Board and indi- vidual concerns. The power of the Board would rest mainly upon an undertaking entered into by every colliery in the country employing more than thirty underground workers to accept as binding every decision made by the Board in accordance with its constitution. The twenty principles laid down in this constitution indicate both the spirit in which co-operation is accepted and the precise duties whose fulfilment the Board would have to enforce. One of these is concerned with amalgamations. There are today 746 separately owned colliery undertakings in the country, 416 of which produce 991 per cent. of the total output. Mr. Foot recognises that this is too many, and admits that if the number were reduced to forty or fifty and each of these were well managed "it might be a great improvement over the present position " ; but he urges that we should not go too quickly, and is content to require—and this is one of his "principles "—that support should be given to the closer integration of the industry into a smaller number of units by voluntary agreements, and com- pulsory amalgamation in special (defined) circumstances.

The principles provide that there should be district arrange- ments for the pooling of various services, more efficient mining operations and provision for the sinking of new pits, plans made for the housing, transport and welfare of workers, selling organi- sations, the assurance of stability of employment and good wages, backing for research, conciliation machinery, sound labour management, prompt discussion of grievances, schemes for train- ing and education, and powers to finance colliery undertakings, guarantee loans, and make levies on the industry for these pur- poses. It will be noted that the selling arrangements will eliminate all competition in price, and will leave only competition between different qualities of coal. It will also be noted that at many points the Government or the Coal Commission acting for the Government will have to give the full backing of its authority to the Central Board.

Here then, it must be submitted, is an enlightened statement, made by a representative of the owners, which acknowledges to the full the urgent need of far-reaching reorganisation, which shows that this can only be effected by a high degree of unifica- tion, which demands sane powers of coercion as applied to the industry itself, which admits without qualification the claims of labour to high wages and stable employment, and demands powers for fixing prices. Mr. Foot has made an exceedingly able report which demonstrates that an authority with extraordinary far-reach- ing powers must be set up to regulate the production, selling and distribution of coal, which will require the support of the State (including surely financial help), and would enjoy the power of levying taxes upon the industry. To whom does he give this power over Britain's key industry, directly employing 700,000 workers? To a body which represents the interests of coal-owners alone, without any shadow of representation either for the 700,000 em- ployees of the industry, or the tens of millions of citizens who use its products. We are reminded of that other very interesting and in many respects enlightened report issued some time ago by a group of prominent industrialists, which proposed to set up a cor- poration of business men to control the industry of Great Britain. How could this country hand over to a trade association, however much it might accept the doctrines of national service and trusteeship, unlimited power to fix the prices of coal to the consumer? If a Trust of this kind were set up, resting as it would have to do upon a Statute, how could the workers be expected to be content with arrangements for work and wages in which they had no voice except that which they already enjoy through their trade unions? It is surprising that Mr. Foot should not have made provision for the repre- sentation of either workers or consumers on his Central Board.

What he has in fact done is to make out as strong a case as has ever been presented to the public for the complete unification of the industry, and has shown that that requires powers which no British Government would ever dare to entrust to a single sectional interest. The case against the present system of manage- ment is irresistibly stated. The positive need for unification clearly emerges. There is shown to be just such a need for a dovetailing of services as was recognised some years ago in the case of London transport, when trams, railways and omnibuses throughout the vast area of Greater London were brought under the single con- trol of the London Passenger Transport Board. This public concern has won and deserved the admiration of the whole world. It has achieved the ends of unification without submitting its services to the numbing hand of direct State management. It is just such unification as this, working partly through the dis- tricts, and partly through a central body, which is needed for the coal industry, under a public corporation which could absorb all the skilled personnel at present engaged in the industry, operating alike in the interests of workers and consumers—and, it may be added, without detriment to the legitimate interests of • shareholders. Under such a system all the desirable objectives named by Mr. Foot could be attained, its delays and disadvantages avoided. The argument which leads him to a purely Fascist conclusion points in reality to a radical reconstruction on democratic lines. Mr. Foot has rendered a great service. He has shown the need for and the way towards reconstruction, but the conclusion that will be drawn will be very different from his.