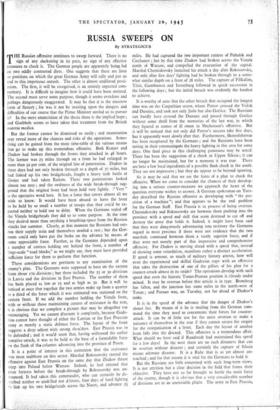 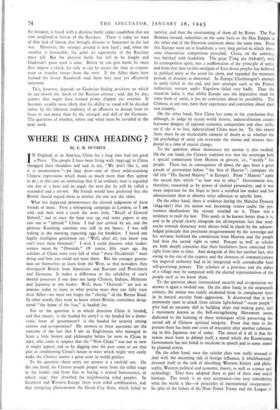 THE Russian offensive continues to sweep forward. There is no sign of any slackening in its pace, no sign of any effective measures to check it. The German people are apparently being fed on two oddly contrasted diets. One suggests that there are lines or positions on which the great German Army will rally and put an end to this impetuous onrush. The other is almost undiluted pessi- mism. The first, it will be recognised, is an entirely expected com-

mentary. It is difficult to imagine how it could have been omitted. The second must serve some purpose, though it seems overdone and perhaps dangerously exaggerated. It may be that it is the sincerest form of flattery ; for was it not by insisting upon the dangers and difficulties of our course that the Prime Minister steeled us to pursue it? In the mere enunciation of the thesis there is the implied hope ; and Goebbels seems to have taken that treatment from the British materia medica.

But the former cannot be dismissed so easily ; and examination may reveal more of the chances and risks of the operations. Some- thing can be gained from the mere time-table of the various strains that go to make up this tremendous offensive. Both Koniev and Zhukov had broken through the fronts they attacked in 48 hours.

The former was 25 miles through on a front he had enlarged to more than 50 per cent, of the original line of penetration. Zhukov in three days had not only broken through to a depth of 37 miles, but had linked up his two bridgeheads, fought a heavy tank battle at Grojec and had taken Radom. These two penetrations looked almost too easy ; and the swiftness of the wide break-through sug- gested that the original front had been held very lightly. ." Very"

is the operative word here. It has a force that covers almost all we wish to know: It would have been absurd to leave the front

to be held by so small a number of troops that they could be ex- pected neither to hold nor to delay. When the Germans sealed off the Vistula bridgeheads they did so to some purpose. At the time they desired more than anything a breathing-space from the Russian attacks last summer. Clearly, at that moment the Russians had out- run their supply train and themselves needed a rest ; but the Ger-

mans could only have put the brake on the advance by means of some appreciable force. Further, as the Germans depended upon a number of centres holding out behind the front, a number of large-scale "road blocks," as we might say, they must have provided sufficient force for them to perform that function.

These considerations are pertinent to any examination of the enemy's plan. The Germans were supposed to have on the eastern front about 170 divisions ; but these included the 25 or 30 divisions in Latvia and the divisions in East Prussia. The number of these, has been placed as low as 15 and as high as 30. But it will be noticed at once that together the two armies make up from a quarter to a third of the force which it was estimated was stationed on the - eastern front. If we add the number holding the Vistula front, with or without those maintaining centres of resistance in the rear, It is obvious that we complete a picture that may be altogether too encouraging. Yet we cannot discount it completely, because Gude- rian cannot have thought of either the Latvian or the East Prussian army as merely a static defence force. The layout of the front uggests a deep salient with strong shoul.ders. East Prussia was to he defended ; and it wouid seem that, having withstood the earlier tentative -attack, it was to be held as the base of a formidable force n the flank of the columns advancing into the province of Posen.

It is a point of interest in this connexion that the resistance was most stubborn on this sector. Marshal Rokossovsky started the offensive against East Prussia on the same day that Zhukov thrust deep into Poland below Warsaw. Indeed, he had entered that great fortress before the break-through by Rokossovsky was an- nounced. It had taken this commander, who can certainly be de- scribed neither as unskilled nor dilatory, four days of hard fighting ta link up his two bridgeheads across the Narev, and advance 25

miles. He had captured the two important centres of Pultulsk and Ciechanov ; but by this time Zhukov had broken across the Vistula north of Warsaw, and compelled the evacuation of the capital. Marshal Cherniakovsky launched his attack a day after Rokossovsky, and only after five days' fighting had he broken through to a some- what similar depth on a front of 28 miles. The capture of Pillkallen, Tilsit, Gumbinnen and Insterburg followed in quick succession in the following days ; but the initial breach was evidently the hardest to achieve.

It is worthy of note that the other breach that occupied the longest time was on the Carpathian sector, where Petrov crossed the Vislok and Dunajec, and took not only jaslo but also Gorlice. The Russians can hardly have crossed the Dunajec and passed through Gorlice without some thrill from the memories of the last war, in which they figured as names of ill omen in Mackensen's offensive. But it will be noticed that not only did Petrov's success take five days, but it apparently went slowly after that. Furthermore, Skezesfehervar has been recaptured by the Germans ; and the Russians have been noting in their communiques the heavy fighting in this area for some days. One final piece in this challenging panorama may be noted: There has been the suggestion of a check in Upper Silesia ; it can no longer be maintained, but for a moment it was true. There are here a few local ingredients of a possible flank check in the south.

They are not impressive ; but they do appear to be beyond ignoring. So it may be said that we see the hints of a plan to check the offensive. When we come to consider the chances of their develop- ing into a serious counter-measure we approach the heart of the question everyone wishes to answer. A German spokesman on Tues- day described the Russian offensive as developing with "the pre- cision of a machine "; and that appears to be the real problem for the German Staff. East Prussia is in process of being overrun. Chcrniakovsky and Rokossovsky are between them pushing into the province with a speed and skill that seem destined to cut off and destroy the army that holds it. Indeed, it might have been said that they were dangerously adventuring into territory the Germans regard as most precious if there were not evidence that the two marshals command between them a vastly superior force, and if they were not merely part of this impressive and comprehensive offensive. For Zhukov is moving ahead with a speed that, instead of showing some retardation, manifests rather a distinct acceleration. If speed is armour, as much of military history attests, how will even the experienced and skilful Guderian cope with an offensive that takes the destruction of one of the pillars of his plan for a counter-attack almost in its stride? The operations develop with such speed that even the historic Torun-Poznan position is elready under mined. It may be overrun before this article is in type. Bromberg has fallen, and the junction lies some miles to the north-west of Torun ; and Poznan was, on Tuesday, not far ahead of Zhukov's tanks.

It is in the speed of the advance that the danger of Zhukov's thrust lies. By means of it he is stealing from the German com- mand the time they need to concentrate their forces for counter-

attack. It can be of little use for the units overrun to make a

nuisance of themselves in the rear if they cannot secure the respite for the reorganisation of a front. Each day the layout of another front falls into the discard. This offensive is a tremendous affair. What should we have said if Rundstedt had maintained this speed for a few days? In the west there are no such distances that can be overrun without disaster ; and certainly the capture of Silesia means ultimate disaster. It is a Ruhr that is as yet almost un- touched ; and for that reason it is vital for the Germans to hold it.

But the Russians are little concerned with such long-term views. It is not attrition but a clear decision in the field that forms their objective. They have not so far brought to battle the main force of the enemy, though it is obvious that a very considerable number of divisions are in an unenviable plight. The army in East Prussia, for instance, is faced with a decisive battle under condittons that are now weighted in favour of the Russians. There is today no trace of that lack of liaison that brought disaster to Samsonov in the last war. Moreover, the swampy ground is now hard ; and, when the weather is favourable, the great air superiority of the Russians must tell. But the decisive battle has still to be fought and Guderian's great need is time. Before he can give battle he must first impose a check, for only so can he secure the time to concen- trate or transfer troops from the west. If the Allies there have learned the lesson Rundstedt read them they may yet effectively intervene.

This, however, depends on Guderian finding positions on which he can absorb the shock of the Russian armour ; and, day by day, centres that might have formed points d'appui are overrun. It becomes steadily more likely that his ability to stand will be decided rather by the inherent tendency of an offensive so distant from its bases to run down than by the strength and skill of the Germans. The questions of whether, where and when must be revealed in the next week.