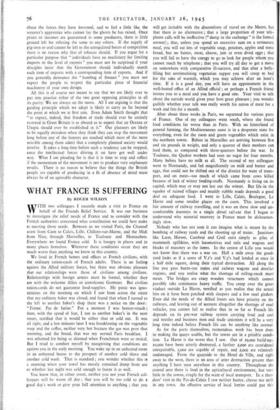 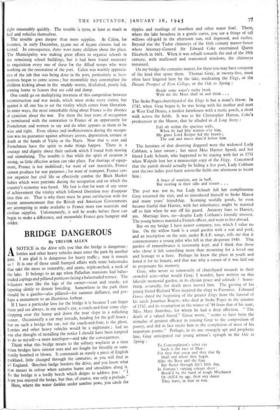 WHAT FRANCE IS SUFFERING

WITH two colleagues I recently made a visit to France on behalf of the Friends Relief Service. It was our business to investigate the relief needs of France and to consider with the French authorities concerned what contribution we could best make to meeting those needs. Between us we visited Paris, the Channel coast from Caen to Calais, Lille, Chalons-sur-Marne, and the Midi from Nice, through Marseilles, to Toulouse and Montaubon. Everywhere we found France cold. It is hungry in places and in many places homeless. Wherever these conditions occur they are much worse than anything we know in this country.

We lived in French homes and offices as French civilians, with the ordinary ration-cards of French adults. There is no feeling against the Allied military forces, but there was obvious pleasure that our relationships were those of civilians among civilians. Relationships with foreign armies must be formal, whether they are with the welcome Allies or unwelcome Germans. But civilian ration-cards do not guarantee food-supplies. My panic was igno- minious on the morning on which I saw from across the street that my ordinary baker was closed, and found that when I turned to the left to another baker's shop there was a notice on the door: "Fermi. Pas de farine." For a moment I was horror-struck ; then, with the speed of fear, I ran to another baker's in the next street, terrified that it would be either shut or sold out. It was all right, and a few minutes later I was breakfasting on the vegetable soup and the coffee, neither very hot because the gas was poor that morning, and the bread, that was my normal Paris breakfast. I was ashamed for being so alarmed when Frenchmen were so stoical. But I tried to comfort myself by recognising that conditions are against you in the early morning. You wake up in an unheated room in an unheated house to the prospect of another cold shave and another cold wash. That is standard ; you wonder whether this is a morning when your towel has merely remained damp from use or whether last night was cold enough to freeze it as well.

You know that, in either event, neither you nor your French col- leagues will be warm all day ; that you will be too cold to do a good day's work or give your full attention to anything ; that you

will get irritable with the discomforts of travel on the Metro, but that there is no alternative ; that a large proportion of your tele- phone calls will be ineffective (" damp in the exchange" is the formal answer); that, unless you spend an excessive sum on a restaurant meal, you will eat lots of vegetable soup, potatoes, apples and some bread, but no butter, meat, cheese, jam or even dried eggs ; that you will fail to have the energy to go to look for people whom you cannot reach by telephone ; that you will try all day to get a move on somewhere with comparative ill-success, and that after a belly- filling but unstimulating vegetarian supper you will creep to bed for the sake of warmth, which you may achieve after an hour's time. If it is a good day, you will have an appointment in the well-heated office of an Allied official ; or perhaps a French friend invites you to a meal and you have a good one. Your visit to talk about the outside world gives your host great pleasure ; you wonder guiltily whether- your talk was really worth his ration of meat for a week and fats for a month.

After about three weeks in Paris, we separated for various parts of France. One of my colleagues went south, where she found food conditions far worse than in Paris. With no hinterland of general farming, the Mediterranean coast is in a desperate state for everything, even for the roots and green vegetables which exist in the northern towns. Babies in Marseilles are arriving between five and six pounds in weight, and only a quarter of their mothers can feed them, as compared with three-quarters before the war. In Toulouie, the Quaker workers had seen no sugar for four months. Many babies have no milk at all. The second of my colleagues went to Normandy, and fed magnificently on milk and butter and eggs, that could not be shifted out of the district for want of trans- port, and on meat—too much of which came from cows killed because of lack of winter feeding-stuffs. Normandy is living on its capital, which may or may not last out the winter. But life.in the squalor of ruined villages and muddy rubble roads depends a good deal on adequate food. I went to Lille, Calais, Boulogne, Le Havre and some smaller places on the coast. This involved a fair amount of railway travelling, and it was on these slow and un- comfortable journeys in a single diesel rail-car that I began to understand why material recovery in France must be dishearten- ingly slow.

Nobody who has not seen it can imagine what is meant by the bombing of railway yards and the shooting up of trains. Junctions like Laon, Hirson, Cambrai and Creil exist simply as piles of mammoth spillikins, with locomotives and rails and wagons and blocks of masonry as the items. In the centre of Lille you would not know that there was a war on. Half a mile away the goods yard looks as if a score of V.I's and V.2'S had landed at once in a half mile square, doing their typical destruction. All along the line you pass burnt-out trains and railway wagons and derelict engines, and you realise what the shortage of rolling-stock must mean. The bridges are crazy wooden structures which cannot possibly take continuous heavy traffic. You creep over the great viaduct outside Le Havre, terrified as you realise that the actual hits on it have been patched with sleepers and a few steel girders. Even did the needs of the Allied fronts-not have priority on the railways, and leaving out of account altogether the shortage of road vehicles, you cannot fail to realise that in so far as French life depends on its pre-war railway system carrying food and coal and textiles and business men and trade unionists it will be a very long time indeed before French life can be anything like normal.

As for the ports themselves, tremendous work has been done in making the quays usable, but the towns are in a pitiab'.e condi- tion. Le Havre is the worst that I saw. Out of 19,000 buildings, to,000 have been utterly destroyed, a further 2,000 are considered unrepairable, 5,000 are capable of repair, and 2,000 are relatively undamaged. From the quayside to the Hotel de Ville, and right away to the west, there is an area of utter destruction greater than anything I have seen anywhere in this country. Throughout the coastal area there is food in the agricultural environment, but -very little in the towns, simply for the want of local transport. In a three days' visit in the Pas-de-Calais I saw neither butter, cheese nor milk in any town. An effective service of local lorries could, put this

right reasonably quickly. The trouble is tyres, at least as much as fuel and vehicles themselves. - The trouble goes deeper than mere supplies. At Calais, for instance, in early December, 35,000 out of 65,000 citizens had re- turned. In consequence, there were many children about the place. The Municipality was making great efforts to organise schools in the remaining school buildings, but it had been found necessary to requisition every one of these for the Allied troops who were working on the restoration of the port. Calais was warmly apprecia- tive of the job that was being done in the port, particularly as loco- motives began to come across ; but meanwhile they contemplate the children kicking about in the muddy streets, ill-clothed, poorly fed, coming home to houses that are cold and damp.

One could go on multiplying instances of this competition between reconstruction and war needs, which must strike every visitor, but against it all.one has to set the vitality which comes from liberation. In some ways, the most remarkable thing about France is the absence of cynicism about the war. For them the four years of occupation is terminated with the restoration to France of an opportunity for Frenchmen and women to say and do what appears to them to be wise and right. Even silence and inoffensiveness during the occupa- tion was no guarantee against arbitrary arrests, deportation, torture or death at the hands of Vichy or the Nazis. Now that is over and Frenchmen have the spirit to make things happen. There is a courage and dignity about their outlook which I found both moving and stimulating. The trouble is that while the spirit of creation is strong, so little effective action can take place. For shortage of equip- ment, France is not mobilised ; for want of raw materials, France cannot produce for war purposes ; for want of transport, France can- not organise her civil life or effectively combat the Black Market habits which were patriotic during the occapation and on which the country's economy was based. My fear is that for want of any sense of achievement the vitality which followed liberation may disappear into thin air. That is why there must be great satisfaction with the recent announcement that the British and American Governments are attempting to make available to France more raw materials and civilian supplies. Unfortunately, it will be weeks before these can begin to make a difference, and meanwhile France gets hungrier and • colder.