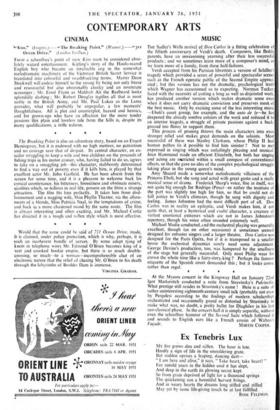 FRom a schoolboy's point of view Kim must be considered abso- lutely wizard entertainment. Kipling's story of the Hindu-reared English boy who became an invaluable cog in the somewhat melodramatic machinery of the Victorian British Secret Service is translated into colourful and swashbuckling terms. Master Dean Stockwell will endear himself to the young by being not only brave and resourceful but also abominably cheeky and an inveterate scrounger ; Mr. Errol Flynn as Mahbub Ali the Redbeard looks splendidly dashing ; Mr. Robert Douglas typifies all that is most noble in the British Army, and Mr. Paul Lukas as the Lama provides, what will probably be unpopular, a few moments' thoughtfulness. All is plot and counterplot, hazard and heroics, and for grown-ups who have an affection for the more tender passions this plain and loveless tale from the hills is, despite its many qualifications, a trifle tedious.

The Breaking Point is also an adventure story, based on an Ernest Hemingway. but it is endowed with no high motives, no patriotism and no courage save that of despair. Its central character, an ex- sailor struggling to keep a wife and two children on the proceeds of fishing trips in his motor cruiser, who, having failed to do so, agrees to take on a smuggling job—this character, stubbornly determined to find a way out of poverty even if it kills him, is played by that excellent actor Mr. John Garfield. He has been absent from the screen for some time, and it is a pleasure to welcome back his cynical countenance, his bitterness, broodiness and obstinate misery, qualities which, so tedious in real life, possess on the films a strange attraction. The film fits him perfectly. It takes him from disil- lusionment and a nagging wife, Miss Phyllis Thaxter, via the allure- ments of a blonde, Miss Patricia Neal, to the temptations of crime, and back in a more chastened mood by the same route. The film is always interesting and often exciting, and Mr. Michael Curtiz has directed it in a tough and sullen style which is most effective.

Would that the same could be said of 711 Ocean Drive, made, It is claimed, under police protection, which is why, perhaps, it is such an incoherent bundle of nerves. By some adept tying 'of knots in telephone wires Mr. Edmond O'Brien becomes king of a vast and crooked bookie empire, but there is so much double- crossing, so much—to a woman—incomprehensible chat of an electronic nature that the relief of chasing Mr. O'Brien to his death through the labyrinths of Boulder Dam is immense.