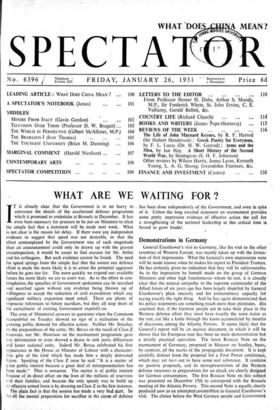 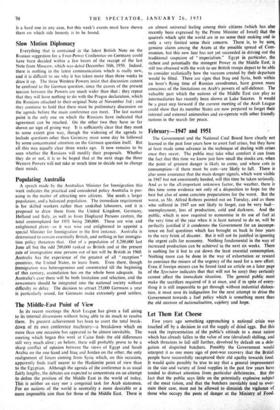 General Eisenhower's visit to Germany, like his visit to the other countries of Western Europe, was mainly taken up with the forma- tion of first impressions. What the General's own impressions were will be made known when he makes his report to President Truman. He has certainly given no indication that they will be unfavourable. As to the impression he himself made on the group of German Ministers and other high functionaries whom he met, it is already clear that the natural antipathy to the supreme commander of the Allied forces of six years ago has been largely dispelled by General Eisenhower's plain sincerity and his extraordinary capacity for saying exactly the right thing. And he has again demonstrated that his policy statements are something much more than platitudes. His assertion that, if the German people are to take their place in the Western defence effort they must have exactly the same status as the rest, cut like a knife through the knots accumulated by months of discussion among the Atlantic Powers. It seems likely that the General's report will be an incisive document, in which it will be shown that his European tour has been no mere demonstration but a strictly practical operation. The latest Russian Note on the rearmament of Germany, presented in Moscow on Sunday, bears, by contrast, all the marks of the propaganda document. It is kept carefully distinct from the proposal for a Four Power conference, which may yet turn out to have some real substance. It contains no positive proposals, and its misrepresentation of the Western defence measures as preparations for an attack are clearly designed for German consumption. The first Russian Note on this subject was presented on December 15th to correspond with the Brussels meeting of the Atlantic Powers. This second Note is equally dearly produced now as an attempted counterblast to General Eisenhower's visit. The choice before the West German people and Government

is a hard one in any case, but this week's events must have shown them on which side honesty is to be found.