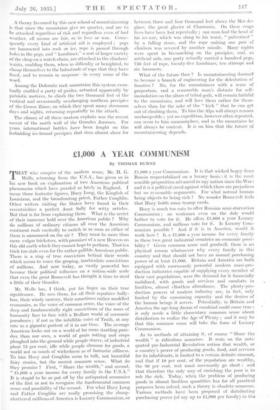 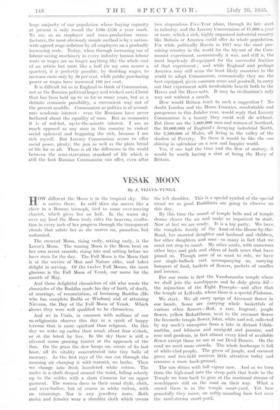 THAT wise compere of the modern scene, Mr. H. G. Wells, returning from the U.S.A., has given us in his new book an explanation of two American political phenomena have puzzled us lately in England. I mean those fantastic figures, Huey Long, the Kingfish of Louisiana, and the broadcasting priest, Father Coughlin. Other writers visiting the States have found in their eccentricities a perfect Aunt Sally for witty • articles. But that is far from explaining them. What is the secret of their immense hold over the American public ? Why do millions of ordinary citizens all over the American continent rush excitedly to switch in as soon as either of them is announced on the air ? They must be more than mere vulgar tricksters, with promises of a new Heaven on this old earth which they cannot hope to perform. That is a trick too stale even for the rather gullible American public. There is a ring of true conviction behind their words which seems to voice the groping, inarticulate convictions of millions. And now today, so vastly powerful has become their political influence on a nation-wide scale that even the great Roosevelt has thought it time to steal a little of their thunder..

Mr. Wells has,' I think, put his finger on their true significance. He sees them, for all their repulsive bally- hoo, their windy oratory, their sometimes rather muddled economics, as the voice of common sense, the voice of the deep and fundamentally right convictions of the mass of humanity face to face with a Bedlam world of economic paradoxes ; if not as the infallible voice of Truth, at any rate as a gigantic portent of it in our time. The average American looks out on a world of far more startling para- dox than our own, a world of grain rotting and crops ploughed into the ground while people starve, of industrial plant 75 pep cent. idle while people clamour for goods, a world not so much of wickedness as of fantastic silliness. To him Huey and Coughlin seem to talk, not beautiful fairy stories, but the merest common sense. What do they promise ? First, " Share the wealth," and second, " £1,000 a year income, for every. family in the U.S.A." It is stupid to be so put off by the antiquated economics of the first as not to recognize the fundamental common sense and possibility of the second. For what Huey Long and Father Coughlin arc really promising the slump- shattered millions of America is Luxury Communism, or £1,000 a year Communism. It is that wicked bogey from Russia respectabilized on a luxury basis : it is the most sensible proposition advanced in any nation since the War: and it is a political creed against which there are prejudices but no reasonable arguments. For what normal human being objects to being rich ? No wonder Roosevelt feels that Huey holds some trump cards.

Huey is much too cute to offer Russian semi-starvation Communism ; no workman even on the dole would bother to vote for it. He offers £1,000 a year Luxury Communism, and millions vote for it. Is Luxury' Com- munism possible ? And if it is in America, would it work here ? Is a £1,000 a year income for every family in these two great industrial countries an economic possi!- bility ? Given common sense and goodwill, there is no physical reason whatsoever why every family in this country and that should not have an annual purchasing power of at least £1,000. Britain and America are both equipped with enormously powerful modern mass-pro- duction industries capable of supplying every member of their vast populations, were the demand for it financially mobilized, with goods and services and comforts in limitless; almost effortless abundance. The plenty-pro- duction powers of modern industry arc, in fact, only limited by the consuming capacity and the desires of the human beings it serves. Potentially, in Britain and America the age-long dream of mankind could come true : it only needs a little elementary common sense about distribution to realize the Age of Plenty ; and it may be that this common sense will take the form of Luxury Communism.

As to methods of attaining it, of course " Share the wealth " is ridiculous nonsense. It rests on the anti- quated pre-Industrial Revolution notion that wealth, or a country's power of producing goods, food, and services for its inhabitants, is limited to a certain definite amount,' and that if 10 per cent. of the population are wealthy, the. 90 per cent. rest must necessarily go short : and that therefore the only way of enriching the poor is to rob the rich. Today, when the problem of producing goods in almost limitless quantities has for all practical purposes been solved, such a theory is obsolete nonsense. Various methods have been proposed of distributing purchasing power (of say up to £1,000 per family) to the large majority of our population whose 'buying capacity at present is only round the £100–£150 a year mark. To me, as an employer and mass-production manu- facturer, the most obviously simple method is by a nation- wide agreed wage-inflation by all employers on a gradually increasing scale. Today, when through increasing use of labour-saving machinery in every industry human labour costs or wages are no longer anything like the whole cost of an article but more like a half (in my own nearer a quarter), it is perfectly possible, by doubling wages, to increase costs only by 50 per cent. while public purchasing power or wages have increased 100 per cent.

. It is difficult for us in England to think of Communism, not as the Russian political bogey and wicked anti-Christ that has been held up to us for so many years, but as a definite economic possibility, a convenient way out of the present muddle. Communism as politics is of second- rate academic interest : even the Russians have never bothered about the equality of man. But as economics it is of red-hot, up-to-the-minute interest. I am as much opposed as any man in this country to violent social upheaval and beggaring the rich, because I am rich myself. But Luxury Communism seems to offer social peace, plenty, the jam as well as the plain bread of life for us all. There is all the difference in the world between the semi-starvation standard of life which is still the best Russian Communism can offer, even after two stupendous Five-Year plans, through its late start in industry, and the Luxury Communism of £1,000 a year or more, which a rich, highly organized industrial country like Britain or America could offer its whole population. For while politically Russia in 1017 was the most pro- mising country in the world for the try-out of the Com- munist experiment, economically it was, and still is, the most hopelessly ill-equipped for the successful fruition of that experiment ; and while England and perhaps America may still seem the least likely countries in the world to adopt Communism, economically they are the best equipped, given common sense and goodwill, to carry out that experiment with incalculable benefit both to the Haves and the Have-nots. It may be civilization's only way out without a smash.

How would Britain react to such a suggestion ? No doubt London and the Home Counties, comfortable and prosperous in this Jubilee year, would reply that Luxury Communism is a luxury they could well do without. But there are the 5,000,000 men and women of Scotland, the 20,000,000 of England's decaying industrial North, the 2,500,000 of Wales, all living in the valley of the shadow of Poverty. To them it would be like the sun shining in splendour on a new and happier world.

Yes, if one had the. time and the flow of oratory, it would be worth having a shot at being the Huey of Britain.