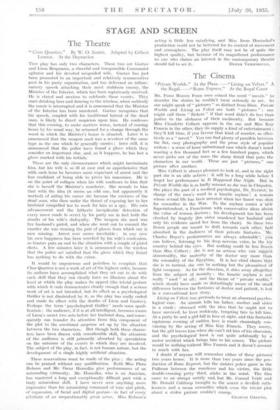 "Private Worlds." At the Plaza.--"Living on Velvet." A . the Regal. "Rome Express." At the Royal Court • Ma. FORD MADOX Form once coined the word "liuvels" to describe the stories he couldn't treat seriously as art. 'So one might speak of " pictures " as' distinct from filma. Private Worlds and Living on Velvet are both " pictures" one might call them "' flickers " if that word didn't do lesS than justice to the slickness of their mediocrity. But beemise Miss Claudette Colbert appears in the one and Miss Kay Francis in the other, they do supply a kind of entertainment ; they'll kill time, if you favour that kind of murder; as effee- tively as a " nuvel." You can find plenty of parallels betWeen the flat, easy 'photograPhy and the prose style of Popnlar writers.: a sense of loose unbuttoned ease which doesn't mind- wasting a few thousand feet or a few hundred pages, which never 'picks out of the mass the sharp detail that puts the characters in our world. These are just " pictures;". one picture after another. Miss Colbert is always pleasant to look at, and in the right part, she is an' able actress : it will be a long while before forget her perforinance in It Happened One Night. ' lint in Private Worlds A6 is as badly miscast as she Was in Cleopatra. She plays the part of a medical psychologist, 'or. Everest;' iri charge of the men's ward in a lunatic asylum; a' woman whose sexual life has been arrested when her fiance was shOt for cowardice in the War. To the asylum cornea aie,k` Superintendent, a Frenchman with conservative ideas EMMA the value of women doctors ; his development too has been checked by tragedy (his sister murdered her husband' and only his evidence saved her from the chair). So these tV;rd frozen people are meant to drift towards each other, half absorbed in the• darkness of their private fantasies. -Mr. Charles Boyer's performancei are always admirable';' can believe, listening to. his deep nervous voice, in the icy country behind- the eyes: But nothing could be IeSS froien than Miss Colbert ; • 'she is not an actress who 'Carl'`suggest abnormality, the austerity of the doctor .any more than the sensuality of the Egyptian. It is her chief charm. that she is 'so normal, she can be nothing but the' pleasantegt OT light company.- As•for the direction, it shies away altogether from the subject of insanity : the hinatic'; asylum' is not really " used " at all ; and the theme of " private Worlds," which should 'have made us diaturbingly 'aware 'of the' small difference between the 'fantasies of doctor and patient; is lost hi a conventional' love story.

Living on Velvet; too, pretends to•treat an abnormal psycho- logical case. -An airman kills his father, Mother and sister in a crash ; obSessed with the idea that he ought Wit to have survived, he lives 'recklessly, tempting fate to kill Min. At a party he and a girl fall in love at sight, and this fantastic rapturous evening of sudden love is made charmingly con- vincing by the acting of Miss Kay Francis. They marry, but the girl leaVes him when she can't rid him of his obsession, and the psychological knot is cut quite arbitrarily by n. motor accident which brings him to his senses. The picture would be nothing without Miss Francis and it doesn't amount to much with her.

' I doubt if' anyone will remember either 'of these' pictures' two years hence. ' It is more than, two' years since the' pro- duction of Rome Express, but the siniater poker genie 'in the Pullman between the murderer 'and his victim, the little• double-crossing- petty thief, sticks in the mind. • The film came to an abrupt -untidy end; but Mr. ,Conrad Veidt and' Mr. Donald Caitlin* brought to the screen a devilish ruth- lessness and a mean cowardice which even the trivial plot about a stolen picture couldn't cramp. ' • GRAHAM GREENE.