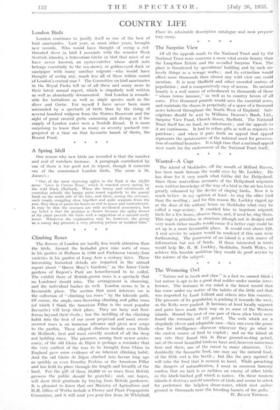 The flowers of London are hardly less worth attention than the birds. Gerard the herbalist grew nine sorts of roses. in his garden at 'Holborn in 1596 and Parkinson twenty-four varieties in his garden at Long Acre a century later. These interesting historical details are, imparted in the annual report about " Queen Mary's Gardens," , as the Inner Circle gardens of Regent's Park are henceforward to be called. The exhibit there of British-grown roses is a spectacle that no Londoner should miss. The arrangement is charming, and the individual bushes do well. London seems to be a favourable place. The section that most interests me, is the collection of " climbing tea roses " by the lakeside path. Of course, the single, once-flowering climbing and pillar roses (of which I think the American Pillar is the most popular favourite) will keep their place. They arc lusty and flori- ferous beyond their rivals ; but the instilling of the climbing. habit into the best of our more perpetual and'most sweet- scented roses is an immense advance and gives new scope to the garden. These alleged climbers include even Etoile. de Hollande, best and most sweetly scented of all the deep red bedding roses. The presence, among their newer aristo- cracy, of the old Gloire de Dijon is perhaps a reminder that the very earliest of the teas to be brought from China to England gave some evidence of an inherent climbing habit. And the old Gloire de Dijon climbed into favour long ago as quickly as even Dorothy Perkins or the American Pillar and has held its place through the length and breadth of the land. For the gift of these 18,000 or so roses from British growers the public should be grateful ; and, one hopes, will show their gratitude by buying from British gardeners.. It is pleasant to know that our Ministry of Agriculture and H.M. Office of Works include a Flower and Plant Propaganda Committee, and it will send you post-free from, 10 Whitehalt