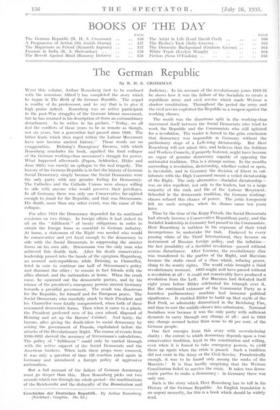 WITII this volume, Arthur Rosenberg (not to be confused with the notorious Alfred !) has completed the story which he began in The Birth of the German Republic. ' The sequel is worthy of its predecessor, and to say that is to give it high praise indeed. Rosenberg was an active participant in the post-War struggles of the German labour movement, but he has retained in his description of them an extraordinary detachment. As he writes in his preface, " Today, we all feel the conflicts of those years to be as remote as though, not six years, but a generation had passed since 1928. The bitter feuds which then raged within the Labour Movement have now become ancient history." Those words are no exaggeration. Briining's Emergency Decrees, with which Rosenberg concludes his book, signified • the, final collapse of the German working-class movement's struggle for power. What happened afterwards (Papen, Schleicher, Hitler and June 30th) was merely an epilogue to the real tragedy. The history of the German Republic is in fact the history of German Social Democracy simply because the Social Democrats were the only party with any genuine feeling for Democracy. The Catholics and the Catholic Unions were always willing to side with anyone who would preserve their privileges. In all Germany there was only one Conservative far-sighted enough to stand for the Republic, and that was Stresemann. His death, more than any other event, was the cause of the collapse.

For after 1924 the Democracy depended for its continued existence on two things. In foreign affairs it had staked its all on the " fulfilment " of treaty obligations in order to obtain the foreign loans so essential to German industry. At home, a statesman of the Right was needed who would be conservative and yet loyal enough to the democracy to side with the Social Democrats in suppressing the sinister forces on his own side. Stresemann was the only man who achieved this double task. After his death conservative leadership passed into the hands of the egregious Hugenberg, an avowed anti-republican, while Bruning, as Chancellor, tried in vain to continue one half of Stresemann's policy and discount the other ; to remain in fact friends with the allies abroad, and the nationalists at home. When the crash came, he squeezed out the democratic parties, and by his misuse of the president's emergency powers steered Germany towards a presidial government. The result was disastrous for the Republic, for himself and for European peace. 'The Social Democrats who manfully stuck to their President and his Chancellor were fatally compromised, when both of these renounced democratic forms. Then when it came to a pinch, the President preferred men of his own school, disposed of Bruning and set up the Barons' Cabinet. And lastly, the barons, after giving the death-blow to social democracy by seizing the government of Prussia, capitulated before the attacks of the Revolutionary Right. The course of events from 1930-1933 showed the accuracy of Stresemann's calculations. The policy of " fulfilment ". could only be carried through with the active support of the Social Democrats and the American bankers. When both these props were removed, it was only a question of time till reaction ruled again in Germany and introduced a foreign policy of aggressive nationalism.

But a full ,account of the failure of German democracy must go deeper than this. Herr Rosenberg picks out two strands which run through the whole period—the machinations of the Reichswehr and the disloyalty of the Beamtentum and

Geschiehte der Deutsehen Republik. By Arthur Rosenberg. (Karisbad Graphia. 10s. 8d.) Judiciary. In his account of the revolutionary years 1918-21 he shows how it was the failure of the Socialists to create a republican army and civil service which made Weimar a shadow constitution. Throughout the period the army and the civil service exploited the Republic as a weapon against the working classes.

The result was the disastrous split in the working-class movement itself between the Social Democrats who tried to work the Republic and the Communists who still agitated for a revolution. The reader is forced to the grim conclusion that democracy was impossible in Germany without the preliminary stage of a Left-wing dictatorship. But Herr Rosenberg will not admit this, and believes that the Soldiers and Workers Councils, if properly fostered, might have become an organ of genuine democracy capable of opposing the nationalist tradition. This is a strange notion. In the months succeeding a revolution, dictatorship, whether veiled or open, is inevitable, and in Germany the decision of Ebert to col-

laborate with the High Command meant a veiled dictatorship of the Right. The only alternative—Socialist dictatorship—

was an idea repellent, not only to the leaders, but to a large majority of the rank and file of the Labour Movement. Schooled in the democratic tradition, the German working-

classes refused this chance of power. The petite bourgeoisie felt no such scruples when its chance came ten years later.

Thus by the time of the Kapp Putsch, the Social Democrats had already become a Conservative Republican party, and the Socialist leadership in Germany had passed to the Communists.

Herr Rosenberg is ruthless in his exposure of their total incompetence to undertake the task. Enslaved to every.

passing whim of the Third International, they became an instrument of Russian foreign policy, and the inflation— the last possibility of a Socialist revolution—passed without

serious disturbance. After Locarno, the revolutionary élan was transferred to the parties of the Right, and Marxism became the static creed of a class which, refusing power,

clung to its scanty rights. The world crisis brought a third revolutionary moment. 1983 might well have passed without a revolution at all : it could not conceivably have produced a revolution from the Left. For Marxism had defeated itself eight years before Hitler celebrated his triumph over it.

But the continued existence of the. Communist Party as a harmless parliamentary machine had immense political, significance. It enabled Hitler to build up that myth of the Red Peril, so admirably dramatized in the Reichstag Fire, and thus to cow the middle-classes into submission. National Socialism won because it was the only party with sufficient dynamic to carry through any change at all: and in 1933 any change seemed better than none to 40 per cent, of the German people.

One fact emerges from this story with overwhelming charity : the extent to which democracy depends upon a true conservative tradition, loyal to the constitution and willing, even when it is forced to take emergency powers, to yield them up again when the crisis is passed. Such a tradition did not exist in the Army or the Civil Service. Paradoxically enough, it was to be found only among the ranks of the Marxists ! It is thus hardly surprising that the Weimar Constitution failed to survive the crisis. It takes two demo- cratic parties to make a' democracy in Germany there was only one.

Such is the story which Herr Rosenberg has to tell in his History of the German Republic. An English translation is an urgent necessity, for this is a book which should be widely read.