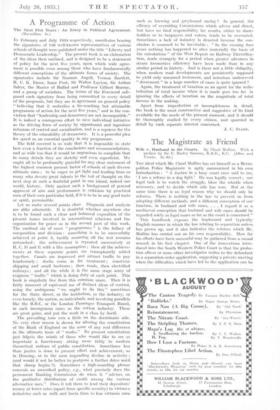 A Programme of Action

The Next Five Years : An Essay in Political Agreement. (Macmillan. Ss.)

Ix February and July 1934 respectively, manifestos bearing the signatures of 150 well-known representatives of various schools of thought were published under the title "Liberty and Democratic Leadership." The present book is an elaboration of the ideas then outlined, and is designed to be a statement of policy for the next five years, upon which wide agree- ment is possible even among those who have fundamentally different conceptions of the ultimate forms of society. The signatories include Sir Norman Angell, Vernon Bartlett, R. C. K. Ensor, Isaac Foot, Sir Walter Layton, Sir Arthur Salter, the Master of Balliol and Professor Gilbert Murray, and a group of socialists. The terms of the Foreword safe- guard each signatory from being committed to every detail of the proposals, but they are in agreement on general policy " believing that it embodies a farrreaehing but attainable programme of action for the next five years," and in the con- viction that "leadership and democracy are not incompatible." It is indeed a courageous effort to save individual initiative as the driving force of society by opportunist and ingenious infusions of control and socialization, and is a reprieve for the theory of the educability of democracy. It is a powerful plea for speed as an essential quality in any programme.

The field covered is so wide that it is impossible to state here even a fraction of the conclusions and recommendations, and so wide too that it would be ungracious to complain that in many details they are sketchy and even superficial. We ought all to be profoundly grateful for any clear statement of the highest common present factor of schools of such diverse ultinaate aims ; to be eager to get light and leading from so many who devote great talents to the toil of thought on the next step at such a doubtful point in our island, indeed our world, history. Only against such a background of general approval of aim and performance is criticism by •practical men of their own particular field, if it is to be in any good taste or spirit, permissible.

Let us make several points clear. Diagnosis and analysis are alike admirable. It is doubtful whether anywhere else is , to be found such a clear and balanced exposition of the present issues involved in international relations and the organization for peace as in the second part of this work. The cardinal sin of most. " programmes " is the fallacy of composition and division : something is to be successfully achieved at point A, tacitly assuming all the rest remains untouched ; the achievement is repeated successively at B,. C, D and E with a like assumption ; then all the achieve- ments at these separate points are triumphantly added together. Canals are improved and attract traffic to pay handsomely ; docks come in for treatment ; coastwise shipping and small harbours ; then roads, then electrified railways ; and all the while it is the same stage army of exiguous "traffic " which is doing duty at each point. This book is singularly free from this common snare. Then it is fairly innocent of equivocal use of distinct ideas of control, using the ambiguous " we ought to do this " sometimes for the State direct, or the institution, or the industry, or even loosely, the nation, as individuals, and involving parallels like the B.B.C. or the London Passenger Transport Board, in such incongruous cases as the cotton industry. These are great gains, and put the work in a class by itself.

The prevailing ,tone errs a little on the doctrinaire side. No very clear reason is shown for altering the constitution of the Bank of England on the score of any real difference in the ultimate issue of " works." Its present constitution just fidgets the minds of those who would like to see so important a functionary sitting more tidily to modern theoretical notions of public constitution. Sometimes less than justice is done to present effort and achievement, as in Housing, or to the soon impending decline in activity ; (and would it not be better to postpone a further drive until that slump begins ?). Sometimes a high-sounding phrase conceals an unworked policy, e.g., what precisely does the permanent Banking Commission do when it " advises on the qualitative distribution of credit among the various alternative uses." Does it tell them to lend their depositors' money at lower rates (apart from specific security) to virtuous industries such as milk and boots than to less virtuous ones.

such as brewing and greyhound racing ? In general, the efficacy of overriding Commissions which advise and direct, but have no final responsibility for results, either to share- holders or to taxpayers and voters, tends to be overrated. Sometimes a lack of industry is denoted because the con- clusion is assumed to be inevitable : " In the ensuing four years nothing has happened to alter materially the basis of the calculations " of the Weir Report on Railway Electrifica- tion, reads strangely for a period when greater advances in steam locomotive efficiency have been made than in any similar period in history. And is there not a little obliquity, when modern road developments arc persistently supposed to yield only unearned increment, and notorious undeserved " decrement " in a large number of cases is quite ignored ?

Apart from imperfection or incompleteness in detail, the book is the most constructive and suggestive of its kind available for the needs of the present moment, and it should be thoroughly studied by every citizen, and quarried in detail by each separate interest concerned.