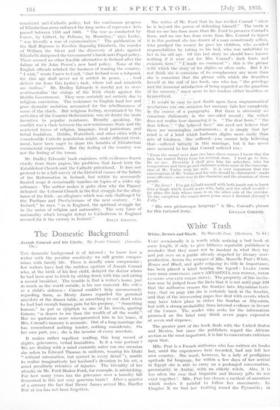 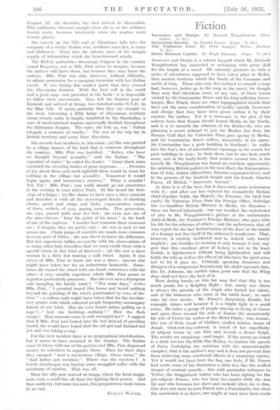 VERY occasionally it is worth while noticing a bad book at Some length, if only to give hitherto reputable publishens`a reminder that they must trot be insolent in what they try and put over on a public already stupefied by literary over- production. Across the wrapper of Mile. Marcelle Prat's White,• Brown and Black, and quite eclipsing its title in importance, has been placed a .label bearing the legend : LEARN FROM THIS BOOK SOMETHING ABOUT ABY$SINIA,I1ER PEOPLE, THEM CUSTOMS AND LIFE THERE TODAY. The propriety of this invita- tion may be-judged from the facts that it is not until page'228 that the authoress crosses the frontier into Abyssinian terri- tory, that on page 240 she is certainly back in the Soudan, and that of the intervening pages live deal with events which may have taken place in either the Soudan or Abyssinia, but with a strong probability from internal evidence in favour of the farmer. The reader who seeks for the information promised on the label may think seven pages expensive

at seven and sixpence. .

The greater part of the book deals with the United States and Mexico, but since the publishers regard the African section as the most important, it is fair to concentrate criticism upon that.

Mlle. Prat is a French authoress who has written six books but, until the experiences here recorded, had not left her own country. She must, however, be a lady of prodigious aptitude for language, for within .a -few days of her arriVtal in Egypt she is able to carry on a prolonged conversation, presumably in „Arabia, With an elderly witch. Alas, it . is too often the case that linguistic and literary gifts do not exist together I Mlle. Prat has chosen a method of narration which makes it painful to follow her movements. In Chapter X we find her trotting round the Pyramids ; in

Chapter XI she describes her first- arrival at Alexandria. This confusion, tiresome enough when she is on the ordinary tourist route, becomes intolerable when she reaches more • remote places.

She travels up the Nile and at Khartoum falls into the company of a stocky Italian who, residents warn her, is crazy . and dishonest. From him she obtains most of the meagre supply of information which she henceforward retails.

The British authorities discourage trippers in the country round Rossaires, not as Mlle. Prat seems to imagine, because the natives will harm them, but because they may harm the natives. Mlle. Prat was able, however, without difficulty, to obtain permission for a camping excursion with her Italian escort. It was during this modest jaunt that they crossed the Abyssinian frontier. With' the best will in the world and a good map—not provided in the book—it is impossible to follow their movements. They left the frontier post of Kurmuk and arrived at Senga, two hundred miles N.N.E. on the Blue Nile. It seems probable that they cut straight to the river, traversing a little bulge of Abyssinian territory about twenty miles in length, inhabited by the ShankallaS, a race of uncircumcised negroes universally derided throughout the Ethiopian Empire. The ruler, she tells us, was " Sultan Ghogoli, a monster of cruelty." The rest of the trip lay in British territory and away from Abyssinia.

She records four incidents in Abyssinia : (a) She was greeted by a village dancer, of the kind that is common throughout the country. Mlle. Prat was horrified. " Rakes, who have no thought beyond sexuality," said the Italian. "The organizer of orgies," he called the leader. " Giant black arms encircled the sweating bodies of gross negresses. . . . Frenzies of joy shook them and until nightfall there would be room for nothing in the village but sexuality. Tomorrow' it would begin again, and tomorrow's morrow," 'What a scandal! Tut, Tut I Mlle. Prat ; you really should go out sometimes in the evening in your native Paris. (b) She heard the foot- Jeps of a hippo ; (c) She claims to have seen a slave caravan and describes it with all the stereotyped details of chinking chains, goads and whips and kiekS, expressionless masks of faces, sockets of eyes, gaping mouths. This procession, she says, passed quite near her bed ; she even saw one of the slave-drivers " bury the point of his lance " in the back of one of the captives. I wonder how common these caravans are ; I imagine they are pretty rare ; she was in luck to run across one. Chain gangs of convicts are much more common in every part of Africa ; she was clever to know the difference. But her experience tallies so exactly with the observations of so many other lady travellers that we must credit them with a special vision in this kind of discovery ; (d) She saw a slave woman in a dirty but turning a mill wheel. Again, it was clever of Mlle. Prat to know she was a slave ; anyone else might have taken her for an industrious housewife. Some- times she turned the wheel with one hand, sometimes with the other—a very sensible expedient which Mlle. Prat seems to regard as particularly gruesome. Has she ever seen a European wife mangling the family wash ? " For some days," writes Mlle. Prat, " I prowled round this house and heard nothing beyond the grinding of the wheel, punctuated by cries of dis- tress "—a callous male might have taken that for the involun- tary grunts with which coloured people frequently accompany labour of any kind. Has she ever heard sailors pulling on a rope ?—" And one rnorning—nothing " How the flesh creeps I Had someone come in and strangled her ? • I suggest that if Mlle. Prat had looked into the but instead of prowling round, she would have found that the old girl had finished her job and was taking a nap.

For the next incident there is no geographical identification, but it seems to have occurred in the Soudan. The Italian came to blows with one of the porters and Mlle. Prat dispensed money to onlookers to separate them. Then for three days they camped " near a mysterious village, whose name," she " had . better not mention." Where was the mystery ? A Greek storekeeper was buying some smuggled coffee with the minimum of caution. That was all.

Then the silly pair arrived at Senga, where the local magis- trate took a small fine off them for fighting their porter. And then suddenly, but none too soon, this preposterous book comes to an end.