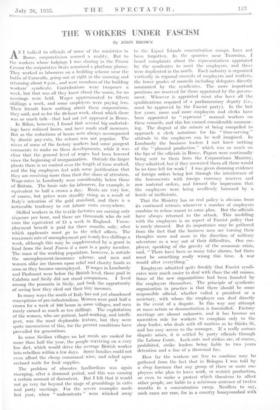 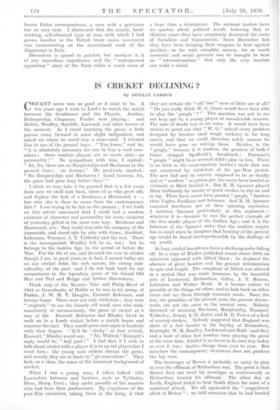 THE WORKERS UNDER FASCISM

By JOHN BROWN AS I talked to officials of some of the ministries in Rome, corporativism seemed a reality. But to the workers whose lodgings I was sharing in the Piazza Cavour the corporative State remained a platform phrase. They .worked as labourers on a building scheme near the baths of Caracalla, going out at eight in the morning and returning about 9 p.m., and were members of the building workers' syndicate. Contributions were twopence a week, but that was all they knew about the union, for no meetings were held. Wages approximated to fifteen ,shillings a week, and some employers were paying less. Their friends knew nothing about these corporations, they said, and as for the 40-hour week, about which there was so much talk—that had not yet appeared in Rome.

In Milan, however, I found that several big undertak- ings have reduced hours, and have made staff increases. But as the reductions of hours were always • accompanied • by drastic pay-cuts, the reform was not popular. The :wives of some of the factory workers had some pungent comments to make on these developments, while it was :clear that the general level of wages had been lowered ,since the beginning of reorganization. Outside the larger plants there is no control over the length of time worked, and the big employers feel with some justification that they are receiving more than their due share of attention. Wage-rates in Lombardy were considerably below those of Britain. The basic rate for labourers, for example, is equivalent to half a. crown a day. Rents are very low, of course, but prices were steadily rising as a result of Italy's retention of the gold standard, and there is a .noticeable tendency to cut labour costs everywhere.

Skilled workers in the textile factories are earning only sixpence per hour, and there .are thousands who do not earn the equivalent of £1 a week in England. Unem- ployment benefit is paid for three months only, after which applicants must go to the relief offices. The maximum rate of unemployment pay is only five shillings a week, although this may be supplemented by a grant in -kind from the local Fascio if a man is a party member. The mass of the working population, however, is outside the unemployment-insurance scheme, and men and women alike are thrown upon relief and charity funds as soon as they become unemployed. If wages in Lombardy and Piedmont were below the British level, those paid in Calabria and Sicily did not stand comparison. I lived among, the peasants in Sicily, and took the •opportunity of seeing how they eked out their tiny incomes.

Iu many ways the south of Italy has not yet abandoned conceptions of pre-industrialism. Women were paid half a crown for a week of 100 hours in some villages, and men rarely earned as much as ten shillings. The exploitation of the women, who are patient, hard-working, and intelli- gent, was the most deplorable feature, but they were quite unconscious of this, for the present conditions have prevailed for generations.

In some Sicilian villages no hot meals are cooked for more than ,half the year, the people surviving on a .very low diet, which would drive the average British worker into rebellion within a few days. Some families could not even afford the cheap communal wine, and relied upon • 'orchard raids for fruit supplies.

The problem of absentee landlordism was again emerging, after a dormant period, and this was causing a certain amount of discontent. But I felt that it would not go very far beyond the stage of grumblings in cafes and party meetings. For the severe examples made last year, when " malcontents " were whisked away to the Lipari Islands concentration camps, have not been forgotten. In the quarries near Taormina, I heard complaints about the representatives appointed by the syndicates to meet the employers, and these were duplicated in the north. Each industry is organized vertically in regional councils of employers and workers, the lower grades of councils including delegates directly nominated by the syndicates. The more important positions are reserved for those appointed by the govern- ment. Whoever is appointed must also have all the ;qualifications required of a parliamentary deputy (i.e., must be approved by the Fascist party). In the last few years, more and , more employers and clerks have been appointed to ".represent " manual workers on these councils, and this has caused considerable murmur- ing. The disgust of the miners at being compelled to approach a clerk notorious for • his " time-serving " attitude. to the employers can be well imagined. In Lombardy the business leaders I met knew nothing of the " planned production " which was so much on the lips of the officials in Rome. Papers were continually being sent to them from the Corporations Ministry, they admitted, but if they answered them all there would be no time left for work I I was given damning evidence of foreign orders being lost through the interference of the bureaucrats with foreign currency reserves and raw material orders, and formed the impression that the employers were being needlessly harassed by .a horde of inefficients.

That the Ministry has no real policy is obvious from its continued retreats whenever a number of employers combine to refuse assent to some plan. But the officials have always returned to the attack. This meddling with the employers is an aspect of Fascist policy that is rarely stressed. But its importance may be gathered from the fact that the business men are turning their thoughts more and more in the direction of military adventure as a way out of their difficulties. One em- ployer, speaking of the gravity of the economic crisis, said, " There have been so many false alarms, but there must be something really wrong this time. A war Would alter everything."

Employers admitted quite frankly that Fascist syndi- cates were much easier to deal with than the old unions. Some of the new organizations had been founded by the employers themselves. The principle of syndicate organization in practice is that there should be some responsible official, whether called a president or a secretary, with whom the employer can deal directly in the event of a dispute. In this way any attempt at mass action or demonstration is forestalled. Factory meetings are almost unknown, and it has• become an unwritten rule for workers to complain only to the shop leader, who deals with all matters as lie thinks fit, and has easy access to the manager. If a really serious dispute arises, it is settled by party officials- through the Labour Court. Lock-outs and strikes are, of course, prohibited, strike leaders being liable to two years detention and a fine of a thousand lire.

How far the workers are free to combine may be gathered from the fact that in Bologna I was told by a shop foreman that any group of three or more em- ployees who plan to leave work, or restrict production, or even to make a protest which threatens to affect other people, are liable to a minimum sentence of twelve months in a concentration camp. Needless to say, such cases- are rare, for in a- country honeycombed with Secret Police correspondents, a man with a grievance has no easy task. I discovered that the steady, hard- working, self-educated type of man with which I had grown familiar in the British trade union movement was concentrating on the recreational work of the Dopolatioro in Italy.

Discontent is spread in patches, but nowhere is it of any immediate importance, and the, " underground opposition " story of the Paris exiles is much more of a hope than a description. The national leaders have no qualms about political revolt, believing that in thirteen years they have completely destroyed the roots of Socialism and Communism. Since December last they have been bringing their weapons to bear against pacifism—so far with complete success, for so much economic and social pressure can be brought to bear on " internationalists " that only the very resolute can make a stand.