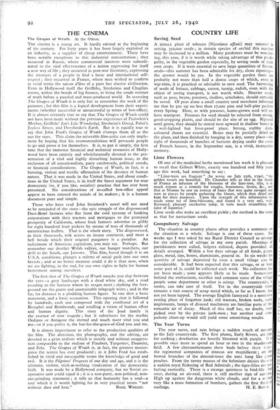 The Grapes of Wrath. At the Odeon.

THE cinema is a young art. It hardly existed at the beginning of the century. For forty years it has been largely exploited as an industry, as a supplier of cheap entertainment. There have been notable exceptions to this industrial concentration ; they occurred in Russia, where commercial interests were subordi- nated to the vital effervescence of a nation expressing for itself a new way of life ; they occurred in post-war Germany, expressing the attempts of a people to find a basic and international self- respect ; they occurred in France, where men wished to confirm in vivid terms the raison d'être of a pure but elusive civilisation. Even in Hollywood itself the Griffiths, Stroheims and Chaplins strove, within the bonds of big finance, to bring the crude essence of truth before a puzzled and mass-produced world. In assessing The Grapes of Wrath it is only fair to remember the work of the pioneers ; for this film is a logical development from their experi- ments (whether successful or unsuccessful in terms of box-office). It is almost certainly true to say that The Grapes of Wrath could not have been made without the previous experience of Pudovkin's Mother, Griffiths' Isn't Life Wonderful, Stroheim's Greed, Pabst's Joyless Street, and Dovshenko's Earth. But it is equally true to say that John Ford's Grapes of Wrath o'ertops them all as the sun the stars. This claim the miserable film-critic can only imple- ment by hoping that his recommendations will persuade people to go and prove it for themselves. It is, to put it simply, the first time that the immense financial and technical resources of Holly- wood have been entirely and wholeheartedly devoted to the pre- sentation of a vital and highly disturbing human issue, to the exclusion of all sensationalism, party catchwords, political creeds, or financial considerations. The Grapes of Wrath, in fact, is a burning, violent and terrific affirmation of the decency of human nature. That it was made in the United States, and about condi- tions in the United States, is in itself the finest argument for true democratic (or, if you like, socialist) practice that has ever been presented. No considerations of so-called box-office appeal appear to have entered the minds of its makers ; it is a human document pure and simple.

Those who have read John Steinbeck's novel will not need to be reminded of the story—the epic struggle of the dispossessed Dust-Bowl farmers who flee from the cold tyranny of banking corporations with their tractors and mortgages to the promised prosperity of California, whose fruit farmers advertise so glibly for eight hundred fruit pickers by means of tens of thousands of meretricious leaflets. That is the whole story. The dispossessed, in their thousands, trek across an insane continent, and meet a hell beside which their original purgatory is a paradise. An indictment of American capitalism, you may say. Perhaps. But remember our derelict Welsh valleys, our hunger marchers, our drift to the South, our Jarrows. This film, based though it is on U.S.A. conditions, plunges a stiletto of social guilt into our own breasts ; and at no better moment could it do it than now, when we are fighting, in the end, for our own rights to fight for human betterment among ourselves.

The first shot of The Grapes of Wrath smacks you slap between the eyes—a grey landscape with a dead white sky, and a road receding to the horizon where its verges meet ; slashing the fore- ground are the gaunt and unattainable telegraph wires ; and in the far, far distance is a plodding human figure. In one shot a basic statement, and a basic accusation. This opening shot is followed by hundreds, each one composed with the combined art of a Breughel and Rembrandt, and totalling a vision of human effort and human dignity. This story of the Joad family is the essence of true tragedy ; but it substitutes for the mythic Oedipus or Antigone the eternal and much more vital you and me—or if you prefer it, the but-for-the-grace-of-God you and me.

It is almost impertinent to refer to the production qualities of the film. The direction, the photography, and the editing, are devoted to a grim realism which is strictly and without exaggera- tion comparable to the realism of Flaubert, Turgeniev, Daumier, and Zola. The Grapes of Wrath is, in fact, the greatest master- piece the screen has ever produced ; in it John Ford has estab- lished in vivid and inescapable terms the knowledge of good and evil. It is the Pilgrims' Progress of our day and age, and it is the ultimate, violent, stick-at-nothing vindication of the democratic faith. It was made by a Hollywood company, but no Soviet co- operative unit could equal it ; it is a non-party, non-political, non- axe-grinding statement ; it tells us that humanity has a soul—a soul which it is worth fighting for in very practical terms "not