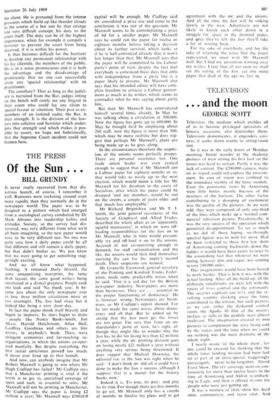 It never really recovered from that dis- astrous launch, of course. I remember it well. Rumours were rocketing around even more rapidly than they normally do in the newspaper world. The paper was to be designed to a pattern which had emerged from a sociological survey conducted by Dr Mark Abrams into readership habits and attitudes. Society, so the survey had dis- covered, was very different from what we'd all been imagining, so the new paper would have to be very different too. No one was quite sure how a daily paper could be all that different and still remain a daily paper, but that didn't bother us. We just knew that we were going to get something stag- geringly exciting.

And we all know what happened. Nothing. A renamed Daily Herald, the same unappetising newsprint, the same drab layout, the same good writers being smothered in a dismal greyness. People took one look and said 'No thank you'. It be- came just about the only newspaper ever to lose three million circulation more or less overnight. The Sun had risen but it looked like being a very short day.

In fact the paper shook itself bravely and began to improve. Its stars began to shine —people like Nancy Banks-Smith, Jon Akass, Harold Hutchinson, Allan Hall, Geoffrey Goodman and others are fine writers in anybody's book. There were stringent economies and far-reaching re- organisations, in which the unions co-oper- ated manfully. But despite everything, the first initial anticlimax proved too much. It never ever lived up to that launch.

And now, can anybody imagine that Mr Robert Maxwell is going to win where Mr Hugh Cudlipp has failed? Mr Cudlipp says that a Manchester printing is vital if the north is to get its specialised coverage of sport and such, so essential to sales; 44Er Maxwell will not be printing in Manchester. Mr Cudlipp says the paper is losing £2 million a year; Mr Maxwell says f500,000

capital will be enough. Mr Cudlipp said 1PC considered a price rise and came to the

conclusion it was out of the question; Mr Maxwell seems to be contemplating a price of 6d for a smaller paper. Mr Maxwell says he could run the paper for twelve or eighteen months before taking a decision about its further survival, which looks as if he is half-convinced already that it won't last longer than that. Mr Maxwell says that the paper will be committed to the Labour party's point of view, despite the fact that everybody is convinced these days that only with independence from a party line is a paper likely to prosper. Mr Maxwell also says that his intended editor will have com- plete freedom to criticise a Labour govern- ment as much as he wishes, which seems to contradict what he was saying about party line.

But then Mr Maxwell has contradicted himself several times already. In May he was talking about a circulation of 300,000.

Now the figure has gone up to 600,000. In May he thought he'd be employing about 260 staff; now the figure is more than 500. which may be more realistic but does sug- gest that perhaps Mr Maxwell's plans are being made up as he goes along.

In the circumstances therefore the sceptic- ism of the unions seems perfectly proper.

There are personal overtones too. One trade union leader was even cynical enough to suggest that if Mr Maxwell ran a Labour paper for eighteen months or so, that would take us nicely up to the next election, which would mean a title for Mr Maxwell for his devotion to the cause of Socialism, after which the paper could be dropped 'and my members would be out on the streets, a couple of years older and that much less employable.'

Smith, the joint general secretaries of the Society of Graphical and Allied Trades,

described the whole affair as an 'apparently squalid manoeuvre', in which ire were off- loading responsibilities for the Sun on to Mr Maxwell, who in time would presum- ably try and off-load it on to the unions. Accused of not co-operating enough in demands for staff rationalisation and the like, the unions would then find themselves carrying the can for the paper's second death. Their suspicions are natural.

Mr Granville Eastwood, general secretary of the Printing and Kindred Trades Feder- ation, made some predictable noises when he said, 'This is a sad day for the British newspaper industry. Newspapers are more than businesses. They are . . . essential to

the proper functioning of democracy.' He is, however. wrong. Newspapers are busin-

esses, as Mr Cudlipp's report showed. For he too made the same noises about demo- cracy and all that. But he ended up by

saying that the Sun must go, the losses

are too great. I'm sure that from an 'pc shareholder's point of view, he's right, al- though they might like to wonder why the

Sun has to die for losing less than £2 million a year, while the IPC printing division goes

on losing nearly £2-1 million a year without anything very serious being threatened. It does suggest that Michael Downing. the

editorial roc at the Sun was right when he said: 'I don't think tee' did all it could have done to make the Sun a success, although I suppose that is a matter for the history books now.'

Indeed it is. Tis true. tis pity: and pity tis tis true. For though there are five months to go yet, Mr Maxwell only has a couple of months to finalise his plans and to get

agreement with the IPC and the unions. And all the time the Sun will be sinking slowly in the west. Advertisers are not likely to knock each other down in a struggle for space in the doomed paper, and qnce they've left the Sun they'll take a lot of wooing hack.

For the sake of everybody, and for the sake of retaining the voice that the paper represented, we must wish Mr Maxwell well. But I find my pessimism winning over my wishes. I fear that all too soon we shall see the setting of the Sun, yet one more paper that died of the age we live in.