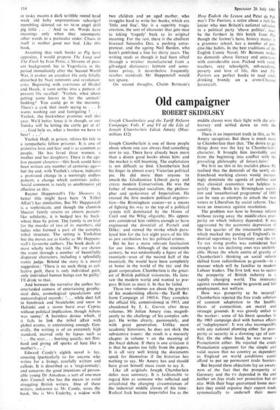 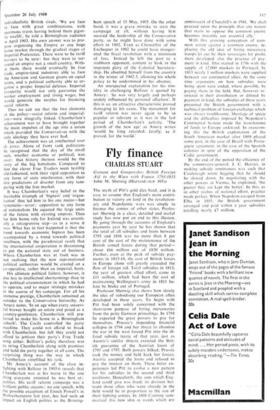 Joseph Chamberlain is one of those people about whom one can always find something new to say. There have already been more than a dozen good books about him; and the market is still booming. The explanation is not difficult to find. Chamberlain had his finger in almost every Victorian political pie. He did more than anyone to smash the Gladstonian Liberal party and create modern Conservatism. He was the father of municipal socialism; the philoso- pher and spokesman of Imperialism. He created the first modern political organisa- tion—the Birmingham caucus—as a means of fighting his way to the top of a political system still dominated by the House of Cecil and the Whig oligarchy. His oppon- ents considered him ruthless enough to have engineered the downfall of Parnell and Mike: and viewed the stroke which para- lysed him for the last eight years of his life as just retribution for his political crimes.

But he has a more relevant fascination for our times. Although of the nineteenth century, he was undoubtedly a figure of the twentieth—even of the second half of the twentieth. He would have been completely at home in the world of the EEC and the giant corporation. Chamberlain is the great- est of British political visionaries. He fore- saw the modern world and wanted to pre- pare Britain to meet it. In that he failed.

These two volumes are about the greatest of his modernising efforts—the Tariff Re- form Campaign of 1903-6. They complete the official life, commissioned in 1915, and abandoned by J. L. Garvin after three volumes. Mr Julian Amery rises magnifi- cently to the challenge of his complex sub- ject. He writes clearly, passionately, and with great penetration. Unlike most academic historians, he does not shirk the substantive issues: the result is a masterly chapter in volume v on the meaning of the fiscal debate. If there is one criticism it is that he quotes too fully from the papers. It is all very well letting the documents speak for themselves if the historian has nothing to say. Mr Amery has and should have given himself more room to say it.

Like all originals, Joseph Chamberlain defies neat summary. It is fashionable to regard him as someone who reflected and articulated the changing circumstances of the industrial middle classes of his time: Radical Jack became Imperialist Joe as the middle classes won their fight with the aris- tocracy and settled down to rule the country.

There is an important truth in this, as Mr Amery recognises. But there is much more to Chamberlain than that. 'The desire to get things done was the key to Chamberlain's character. It brought him inevitably and from the beginning into conflict with the prevailing philosophy of laissez-faire.'

We first see this in his socialist phase. He realised that the demands of the newly en- franchised working classes would increas- ingly dominate the agenda of politics and that classical economics was helpless to satisfy them. Both his Birmingham social- ism and 'unauthorised programme' of 1885 can be seen as attempts to attach the new voters to Liberalism by social reform. They were an insurance against revolution.

The problem was how to finance reform without taxing away the middle-class pros- perity on which industry depended. It was aggravated by the economic depression of the last quarter of the nineteenth century which marked the passing of England's in- dustrial supremacy to Germany and the us. To tax rising profits was considered bad enough; to tax declining ones was unthink- able. Hence the whole centre of gravity of Chamberlain's thinking on social reform shifted from redistribution to growth—in a manner which will be familiar to modern Labour leaders. The first task was to secure the prosperity of British industry in a rapidly changing world. The insurance against revolution would be growth and full employment, not welfare.

How was prosperity to be secured? Chamberlain rejected the free trade solution of constant adaptation to the healthy blasts of competition, on moral and strategic grounds. It was grossly unfair to the worker: some of his finest speeches in the 1903 campaign deal with human effects of 'redeployment'. It was also incompatible with any national planning either for pros- perity or security in a dawning age of con- flict. On the other hand, he was never a Protectionist either. He rejected the crude Protectionist argument for the simple and valid reason that no country as dependent as England on world conditions could afford to put up permanent trade barriers.

But beyond these objections lay an aware- ness of the fact that the prosperity of Germany and the us depended in the end neither on _free trade nor protection but on -size. With their huge guaranteed home mar- lets they could organise their export trade systematically to undersell their more individualistic British rivals. 'We are face to face with great combinations, with enormous trusts having behind them gigan- tic wealth', he told a Birmingham audience in April 1903. His own answer was to pro- pose organising the Empire as one huge home market through the gradual stages of Imperial Preference. There were to be tariff barriers to be sure: but they were to sur- round an empire not a small country. With- in them, there would eventually be free trade, empire-sized industries able to face the American and German giants on equal terms, and a political authority able to or- ganise a proper Imperial defence. Imperial prosperity would not only guarantee the worker employment and rising wages, but would generate the surplus for financing social reform.

Thus we can see that the two elements of the policy—social reform and imperial- ism—were integrally linked. Chamberlain's achievement was to have brought together the main impulses of the age into a union which provided the Conservatives with the only ideology they have ever had.

The achievement was an intellectual tour de force. Alone of front rank politicians he recognised that the day of the small unit, whether economic or political, was over: that history thereon would be the story of the big battalions. Compared to him the clever Free Traders seem terribly old-fashioned, with their rigid opposition to any form of state interference, with their dire predictions of disaster from any tam- pering with the free market.

It was Chamberlain's very belief in the inevitable triumph of 'bigness' and 'organ- isation' that led him to his one major—but systematic—error: opposition to any form of nationalism. He equated the large units of the future with existing empires. Thus for him home rule for Ireland was essenti- ally a retrogressive step—as in a sense it was. What has in fact happened is that the trend towards economic bigness has been accompanied by a trend towards political smallness, with the paradoxical result that the international corporation is threatening to put the national state out of business. Where Chamberlain was at fault was in not realising that the new supranational political authorities would be created on a co-operative, rather than an imperial, basis.

His ultimate political failure, however, is due less to intellectual shortcomings than to the political circumstances in which he had to operate, and to major strategic mistakes in the course of his campaign. For all his immense prestige, Chamberlain remained an outsider to the Conservative hierarchy. As Amery notes, 'In an age when every success- ful brewer bought an estate and posed as a country-gentleman, Chamberlain still pre- ferred to make his home in a Birmingham suburb'. The Cecils controlled the party machine. They could not afford to break with Chamberlain, but felt they could not afford to jettison their party's Free Trade wing either. Balfour's policy therefore was to string Chamberlain along with promises and hold the party together at all costs. The surprising thing was the way in which Chamberlain simplified his task.

Mr Amery's account of the close in- fighting with Balfour in 1903-6 reveals that Chamberlain was at his worst in the one thing everyone assumed he twos best at: politics. His tariff reform campaign was a brilliant public success: no one Speedh. with the possible exception of Enoch Powell's at Wolverhampton last year, has had such an impact on English politics as the Birming- ham speech of 15 May, 1903. On the other hand, it was a grave mistake to start the campaign at all, without having first secured the leadership of the Conservative party, as he might have done with some effort in 1902. Even as Chancellor of the Exchequer in 1902 he could have inaugur- ated the fiscal revolution with a minimum of fuss. Instead he left the post to a stubborn opponent, content to bask in the impotent glory of the Colonial Secretary- ship. He absented himself from the country in the winter of 1902-3, allowing his whole policy to be undermined in his absence.

An unexpected explanation for his tim- idity in challenging Balfour is quoted by Amery: 'he was very largely and perhaps unduly influenced by personal affection'. If this is so, an attractive characteristic proved damaging to his cause. The movement for tariff reform was never again to be so popular or relevant as it was in the last period of Chamberlain's activity. 'The growth of the new age' as Amery writes 'would be long retarded; fatally, as it proved, for the world.'