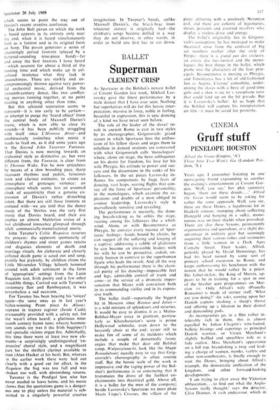 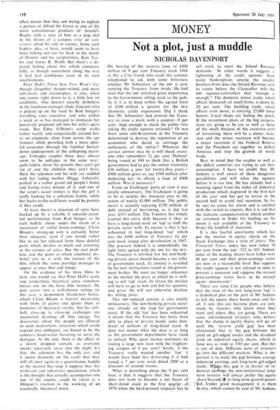 Alfred the Great (Empire, 'A') Three Into Two Won't Go (London Pav- ilion, 'X') Years ago, I remember listening to one opera-going friend expounding to another the evening's entertainment at Covent Gar- den. 'Well, you see,' her plot summary began, 'there are these druids ...' Alfred the Great would seem to be asking for rather the same approach. Well, you see, there are these Danes, a lugubrious lot in blackish armour, stumping about collecting Danegeld and banging in a sulky, mono- tonous way on their shields when provoked. There arc also these Saxons, permanently argumentative and querulous, at a slight dis- advantage in military gear but seemingly acquiring their various robes and vestments from a little woman in a Dark Ages Carnaby Street. Their leader, Alfred. pettishly played by David Hemmings, has had his head turned by some sort of primary school excursion to Rome, and keeps embarrassing his henchmen with the notion that he would rather be a priest. His father-in-law, the King of Mercia, ap- pears to be in training for a spot in one of the brasher quiz programmes on Mer- cian Tv. Only Alfred's wife (Prunella Ransome) is made of sterner stuff. 'What are you doing?' she asks, coming upon her Danish captors slashing a sheep's throat and offering up a libation to their dismal and demanding gods.

As incongruities go. in a film rather in- tolerably rich in them, this is almost equalled by Julian Chagrin's wire-haired, balletic hissings and caperings as principal Danish warrior, or Vivien Merchant's slightly baffled and speechless role as a lady outlaw. Miss Merchant's appearance on a hill top, brandishing a twig and lead- ing a charge of women, monks, varlets and other non-combatants, is finally enough to rout the Danes, bringing about Alfred's triumph, the democratic unification of the kingdom, and other forward-looking developments.

'I am trying to clear away the Victorian obfuscation... to find out what the Anglo- Saxons really thought,' says the director, Clive Donner. A rash endeavour, which in effect means that they are trying to replace a picture of Alfred the Great as one of the more conscientious products of Arnold's Rugby with a view of him as a pop idol in the throes of a campus crise de con- .science about his role in society. Some such hapless idea, at least, would seem to have been lurking not too far back in the minds of Donner and his scriptwriters, Ken Tay- lor and James R. Webb. But there's a de- jected feeling about this whole cinematic folly, as though somewhere along the way it had lost confidence even in its own anachronisms.

Peter Hall's Three Into Two Won't Go, though altogether sharper-witted, and more self-aware and circumspect, is also, when one comes right down to it, a little low on credibility. One doesn't exactly disbelieve in the footloose teenager (Judy Geeson) who is picked up on the road by Rod Steiger's travelling sales executive, and who within a week or so has managed to insinuate her putatively pregnant self into his wife's spare room. But Edna O'Brien's script walks rather warily and conjecturally around her, as an enigmatic alien from across the age frontier, while prowling with a more spite- ful assurance through the familiar beaten- down undergrowth of the collapsing marri- age. Unhappy couples these days always seem to be unhappy in the same way: guilt-ridden about the parents they can't get rid of and the children they can't have.

Here the salesman and his wife are saddled with her fading mother (Peggy Ashcroft), parked in a rather grand old people's home and hating every minute of it; and one of the script's easier ironies is that the girl is really looking for a substitute family, while her backs-to-the-wall hosts would be parents if they could.

At least, there's a situation of sorts here, backed up by a reliable if uneasily-accen- ted performance from Rod Steiger, as he reels bulkily about under the strain of a succession of awful home-comings. Claire Bloom's strung-up wife is certainly better than adequate, even if one would rather like to see her released from these doleful parts which involve so much sad cowering in the corners of sofas. But the real prob- lem, and the point at which cinematic dis- belief sets in, is with the texture of the film, which like some porridge manages to appear at once thin and lumpy.

On the evidence of his three films to date, one would say that Peter Hall's acute and sympathetic theatrical sense somehow misses out on the basic film instincts. He puts actors into a well-chosen setting (in this case, a despondent brand-new house, which Claire Bloom is forever decorating with blobs of paint) and sparks them to moments of theatrical vitality, but his soft- ball, close-up to close-up exchanges are meanwhile draining off film energy. No discoveries about the people are allowed to seem inadvertent; situations which could expand into ambiguity are boxed in by the camera's head-waiter hovering to serve the dialogue. At the end, there is the effect of a slowly dropped curtain, as everyone sneaks separately away into the night. It's late; the salesman has the only car; and it seems distinctly on the cards that they will all meet again in a quarrelsome huddle at the nearest bus stop. I suppose that this irrelevant and subversive speculation, which is the thought that actually accompanies one out of the cinema, could be taken as a filmgoer'S reaction to the working of an essentially theatrical mind.