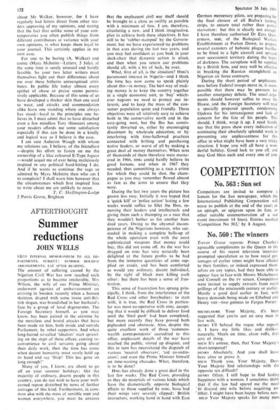 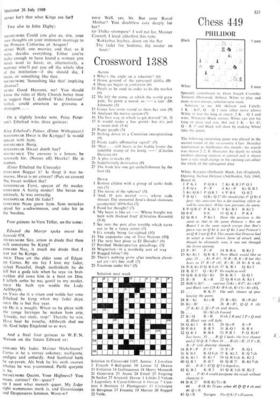 Competitors are invited to .compose a lament for the Sun newspaper, which the International Publishing Corporation will cease to publish at the end of the year; or an epitaph, or epigram upon its fate, or other suitable commemoration of a sad event (maximum 14 lines). Entries marked `Competition No 563,' by 8 August.

Trevor Grove reports: Prince Charles's agreeable compliments to the Queen in the course of his recent television interview prompted speculation as to how royal per- sonages of earlier times might have alluded to their families, or indeed expressed them- selves on any topics, had they been able to appear face to face with Messrs Michelmore and Connell on the TV screen. Competitors were invited to supply extracts from royal grillings of the nineteenth century or earlier. Mostly a good deal earlier in fact, with heavy demands being made on Ethelred and Henry vin—two guineas to Fergus Porter: MICHELMORE Your Majesty, it's been suggested that you're not an easy man to live with.

HENRY I'll behead the rogue who repeat; it. I have my little likes and dislike'. naturally. Meals on time, clean ruffs, that sort of thing.

MICR It's untrue, then, that Your Majesty's short-tempered?

HENRY Absolutely. And you shall leave here alive to prove it.

MICH Thank you, Your Majesty. Does Your Majesty find relationships with the opposite sex difficult?

HENRY Often. I still hope to find lasting Happiness with a woman. I sometimes think that if the law had spared me the need to. discard one wife before acquiring an- Other, I might have been happy before now. MICH Your Majesty speaks for many men. HENRY Isn't that what Kings are for? Two also to John Digby: MICHELMORE Could you give us, sire, your own thoughts on your imminent marriage to the Princess Catherine of Aragon?

HENRY Well, one marries, and that, as it were, decides everything. Either you're lucky enough to have found a woman you never want to leave; or, alternatively, a monster who'll put you off the whole idea of the institution—if she should die, I mean, or something like that.

HENRY Good Heavens, no! You should know the rules of Holy Church better than to suggest that I, dubbed 'Fidei Defensor' withal, could entertain so grievous a stratagem. . . .

HOUSECARLE The answere is a Leman; he scroweth hir. (Noises off) Hearke! He is icumen.

Four guineas to Vera Telfer, on the same:

EDWARD Nay, it much me drede that I wot nat be Kynge.

MICH Thou art the elder sone of Edgar. ED Certes. By my fay I love my fader, yclept Peaceful, thogh methinketh he do tell but a gode tale when he seye six bret- waldan did rowe him in a boot on Dee.

I telleth sothe he nas gentil to my moder. mint He hath syn wedde the Lady Aelfthryth.

ED Ywis she is a vixen and wolde her sone Ethelred be kyng whan my fader deye. MICR He is but five year.

ED He is a nought. Whan so he pleye with the yonge lorynges he maken hem crie, 'Unredy, nat stedy, stop!' Thereby he win. Have heer by trouthe, Alfthryth shul me sle. God helpe Engelond so as wys.

And a final four guineas to W. F. N. Watson on the future Edward tit:

ED I moot what meneth queer. 1y fader right wommanes merk is, and Gavest000es and Despenseres lemman. Wostow? MICH Well, yes, Sir. But your Royal Mother? You doubtless care deeply for her?

Thy fader fro Sodome, thy moder an