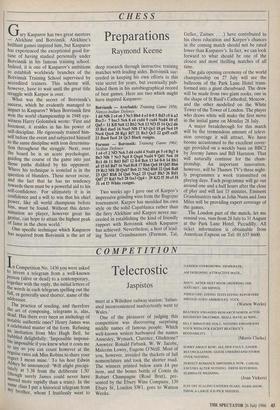 ary Kasparov has two great mentors — Alekhine and Botvinnik. Alekhine's brilliant games inspired him, but Kasparov has experienced the exceptional good for- tune of having studied personally under Botvinnik in his famous training school. Indeed, it is one of Kasparov's ambitions to establish worldwide branches of the Botvinnik Training School supervised by accredited trainers. This scheme will, however, have to wait until the great title struggle with Karpov is over.

What was the secret of Botvinnik's success, which he evidently managed to impart to Kasparov? When Botvinnik first won the world championship in 1948 eye- witness Harry Golombek wrote: 'First and foremost, it resides in his his power of self-discipline. He rigorously trained him- self before the event and subjected himself to the same discipline with iron determina- tion throughout the struggle. Next, over the board he is an acute psychologist, guiding the course of the game into just those paths disliked by his opponent. Where his technique is ironclad is in the question of blunders. These never occur, and the fact that he has no tendency towards them must be a powerful aid to his self-confidence. For ultimately it is in confidence and a will to win that his chief Power, like all world champions before him, must be found. Without this deter- mination no player, however great his genius, can hope to attain the highest peak of fame in the chess world.'

One specific technique which Kasparov has acquired from Botvinnik is the art of deep research through instructive training matches with leading aides. Botvinnik suc- ceeded in keeping his own efforts in this vein secret for years, but eventually pub- lished them in his autobiographical record of best games. Here are two which might have inspired Kasparov: Botvinnik — Averbakh: Training Game 1956; Nimzo-Indian Defence.

Two weeks ago I gave one of Karpov's impressive grinding wins from the Bugojno tournament. Karpov has moulded his own style on the solid Capablanca rather than the fiery Alekhine and Karpov never suc- ceeded in establishing the kind of friendly rapport with Botvinnik which Kasparov has achieved. Nevertheless, a host of lead- ing Soviet Grandmasters (Furman, Tal, Geller, Zaitsev . . .) have contributed to his chess education and Karpov's chances in the coming match should not be rated lower than Kasparov's. In fact, we can look forward to what should be one of the closest and most thrilling matches of all time.

The gala opening ceremony of the world championship on 27 July will see the ballroom of the Park Lane Hotel trans- formed into a giant chessboard. The draw will be made from two giant rooks, one in the shape of St Basil's Cathedral, Moscow, and the other modelled on the White Tower of the Tower of London. The player who draws white will make the first move in the initial game on Monday 28 July.

A major breakthrough for this match will be the tremendous amount of televi- sion coverage it will attract. We have beome accustomed to the excellent cover- age provided on a weekly basis on BBC2 by Jeremy James and Bill Hartston. That will naturally continue for the cham- pionship. An important innovation, however, will be Thames TV's three night- ly programmes a week transmitted on playing days. Each programme will go out around one and a half hours after the close of play and will last 15 minutes. Eminent Grandmasters such as John Nunn and Jana Miles will be providing expert coverage of the games.

The London part of the match, let me remind you, runs from 28 July to 31 August at the Park Lane Hotel, Piccadilly. All ticket information is obtainable from American Express on Tel: 01 637 8600.