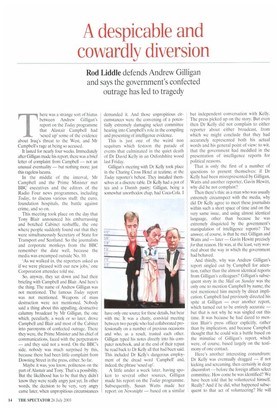 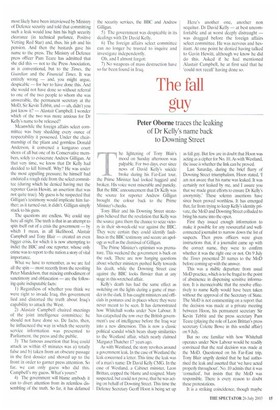 A despicable and cowardly diversion

Rod Liddle defends Andrew Gilligan and says the government's confected outrage has led to tragedy There was a strange sort of hiatus between Andrew Gilligan's report on the Today programme that Alastair Campbell had 'sexed up' some of the evidence about Iraq's threat to the West, and Mr Campbell's rage at being so accused.

It lasted for nearly four weeks. Immediately after Gilligan made his report, there was a brief letter of complaint from Campbell — not an unusual eventuality — but nothing more; just this rageless lacuna.

In the middle of the interval, Mr Campbell and the Prime Minister met BBC executives and the editors of the Radio Four news programmes, including Today, to discuss various stuff: the euro, foundation hospitals, the battle against crime, and so on.

This meeting took place on the day that Tony Blair announced his embarrassing and botched Cabinet reshuffle, the one where people suddenly found out that they were simultaneously Secretary of State for Transport and Scotland. So the journalists and corporate monkeys from the BBC remember the date well, because the media was encamped outside No. 10.

'As we walked in, the reporters asked us if we were pleased with our new jobs,' one Corporation attendee told me.

So, anyway, they sat down and had their briefing with Campbell and Blair. And here's the thing. The name of Andrew Gilligan was not mentioned. The famous Today report was not mentioned. Weapons of mass destruction were not mentioned. Nobody said a thing about this appalling, destructive calumny broadcast by Mr Gilligan, the one which, peculiarly, a week or so later, drove Campbell and Blair and most of the Cabinet into paroxysms of confected outrage. There they were, the Prime Minister and his chief of communications, faced with the perpetrators — and they said not a word. On the BBC's side, nobody was much surprised by this, because there had been little complaint from Downing Street in the press, either. So far.

Maybe it was, you know, politeness on the part of Alastair and Tony. That's a possibility.

But the likelihood has to be that they didn't know they were really angry just yet. In other words, the decision to be very, very angry came later, when unpropitious circumstances demanded it. And those unpropitious circumstances were the convening of a potentially extremely damaging select committee hearing into Campbell's role in the compiling and presenting of intelligence evidence.

This is just one of the weird non sequiturs which festoon the parade of events that culminated in the quiet death of Dr David Kelly in an Oxfordshire wood last Friday.

Gilligan's meeting with Dr Kelly took place in the Charing Cross Hotel at teatime, at the Today reporter's behest. They installed themselves at a discrete table. Dr Kelly had a pot of tea and a Danish pastry; Gilligan, being a somewhat unorthodox chap, had Coca-Cola. I have only one source for these details, but bear with me. It was a chatty, convivial meeting between two people who had collaborated professionally on a number of previous occasions and who, as a result, trusted each other. Gilligan typed his notes directly into his computer notebook, and at the end of their repast he read back to Dr Kelly all that had been said. This included Dr Kelly's dangerous employment of the dread word 'Campbell' and, indeed, the phrase 'sexed up'.

A little under a week later, having spoken to several other sources. Gilligan made his report on the Today programme. Subsequently, Susan Watts made her report on Newsnight — based on a similar but independent conversation with Kelly. The press picked up on the story. But even then Dr Kelly did not complain to either reporter about either broadcast, from which we might conclude that they had accurately represented both his actual words and his general point of view: to wit, that the government had meddled in the presentation of intelligence reports for political reasons.

That is only the first of a number of questions to present themselves: if Dr Kelly had been misrepresented by Gilligan, Watts and another reporter, Gavin Hewitt, why did he not complain?• Then there's this: as a man who was usually extremely circumspect with the media, why did Dr Kelly agree to meet these journalists within such a short space of time and on the very same issue, and using almost identical language, other than because he was extremely disquieted by the government's manipulation of intelligence reports? The answer, of course, is that he met Gilligan and Watts and — later — Gavin Hewitt precisely for that reason. He was, at the least, very worried about the way in which the government had behaved.

And thirdly, why was Andrew Gilligan's report singled out by Campbell for attention, rather than the almost identical reports from Gilligan's colleagues? Gilligan's subsequent story in the Mail on Sunday was the only one to mention Campbell by name; the rest mentioned him merely by direct implication. Campbell had previously directed his spite at Gilligan — over another report, which turned out to be entirely accurate — but that is not why he was singled out this time. It was because he had dared to mention Blair's press officer explicitly, rather than by implication, and because Campbell thought that he could win a battle based on the minutiae of Gilligan's report, which were, of course, based largely on the testimony of one contact.

Here's another interesting conundrum: Dr Kelly was eventually dragged — if not kicking and screaming, then certainly in deep discomfort — before the foreign affairs select committee. How come he was identified? We have been told that he volunteered himself. Really? And if he did, what happened subsequent to that act of volunteering? He will

most likely have been interviewed by Ministry of Defence security and told that committing such a leak would lose him his high security clearance (in technical parlance, Positive Vetting Red Star) and, thus, his job and his pension. And then the bastards gave his name to the press. The Ministry of Defence press officer Pam Teare has admitted that she did this — not to the Press Association, as is conventional, but to the Times. the Guardian and the Financial Times. It was entirely wrong — and, you might argue, despicable — for her to have done this. And she would not have done so without referral to one of the two people to whom she was answerable, the permanent secretary at the MoD, Sir Kevin Tebbit, and — uh, didn't you just know it? — Alastair Campbell. I wonder which of the two was more anxious for Dr Kelly's name to be released?

Meanwhile the foreign affairs select committee was busy shedding every ounce of respectability it possessed. Under the chairmanship of the pliant and gormless Donald Anderson, it convened a kangaroo court shorn of all but one of its Conservative members, solely to eviscerate Andrew Gilligan. At that very time, we know that Dr Kelly had decided to kill himself. Why? He was under the most appalling pressure; he himself had endured a rough ride from the select committee (during which he denied having met the reporter Gavin Hewitt, an assertion that was not quite true). My guess is he suspected that Gilligan's testimony would implicate him further; as it turned out, it didn't. Gilligan simply stuck to his guns.

The questions are endless. We could stay here all night. The truth is that in an attempt to spin itself out of a crisis the government — by which I mean, in all likelihood, Alastair Campbell and Tony Blair — created an even bigger crisis, for which it is now attempting to indict the BBC and one reporter, whose only crime was to report to the nation a story of vital importance.

What we have to remember, as we are fed all the spin — most recently from the revolting Peter Mandelson, that mincing embodiment of sanctimony and obfuscation — are the following quite indisputable facts: 1) Regardless of whether you think we were right to invade Iraq, this government lied and distorted the truth about Iraq's capability to attack the West.

2) Alastair Campbell chaired meetings of the joint intelligence committee; he should not have done so. De facto, then, he influenced the way in which the security service information was presented to Parliament. the press and the public.

3) The famous assertion that Iraq could attack us within 45 minutes was a) totally false and b) taken from an obscure passage in the first dossier and shoved up to the front in order to garner press attention. So far, we can only guess who did this. Campbell's my guess. What's yours?

4) The government will blame anybody it can to divert attention from its relentless dissembling of the truth. So far, it has defamed the security services, the BBC and Andrew Gilligan.

5) The government was despicable in its dealings with Dr David Kelly.

6) The foreign affairs select committee can no longer be trusted to inquire and investigate independently.

Oh, and I almost forgot: 7) No weapons of mass destruction have so far been found in Iraq.

Here's another one, another non sequitur. Dr David Kelly — at best uncomfortable and at worst deeply distraught — was dragged before the foreign affairs select committee. He was nervous and hesitant. At one point he denied having talked to Gavin Hewitt. although AC know he did do this. Asked if he had mentioned Alastair Campbell, he at first said that he 'could not recall' having done so.