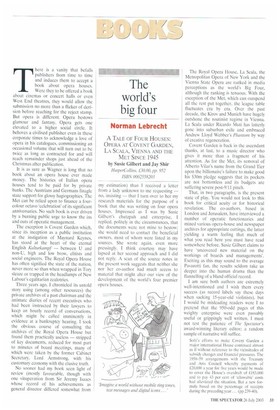 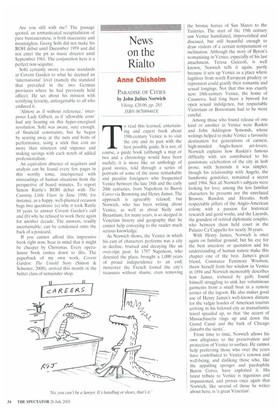 A TALE OF FOUR HOUSES: OPERA AT COVENT GARDEN, LA SCALA, VIENNA AND THE MET SINCE 1945 by Susie Gilbert and Jay Shir HarperCollins. 80.00, pp. 952 ISBN 0002558203 There is a vanity that befalls publishers from time to time and induces them to accept a book about opera houses. Were they to be offered a book about cinemas or concert halls or even West End theatres, they would allow the submission no more than a flicker of derision before reaching for the reject stamp. But opera is different. Opera bestows glamour and fantasy. Opera gets one elevated to a higher social circle. It behoves a civilised publisher even in these corporate times to acknowledge a love of opera in his catalogues, commissioning an occasional volume that will turn out to be twice as long as contracted for and will reach remainder shops just ahead of the Christmas after publication.

It is as sure as Wagner is long that no book about an opera house ever made money. The histories of Italian opera houses tend to be paid for by private banks. The Austrians and Germans finagle state support for glossy hagiographies. The Met can be relied upon to finance a fourcolour octavo 'celebration' of its significant anniversaries. No such book is ever driven by a burning public urge to know the ins and outs of operatic management.

The exception is Covent Garden which, since its inception as a public institution at the instigation of Maynard Keynes, has stood at the heart of the eternal English Kulturkampf — between U and non-C, high and low brow, elitists and social engineers. The Royal Opera House has often signified the state of the nation, never more so than when wrapped in Tory sleaze or trapped in the headlamps of New Labour's egalitarian zealotries.

Three years ago. I chronicled its untold story using (among other resources) the private archives of a past chairman and the intimate diaries of recent executives who had been instructed by their lawyers to keep an hourly record of conversations, which might be called imminently in evidence at a bankruptcy hearing. I took the obvious course of consulting the archives of the Royal Opera House but found them practically useless — stripped of key documents, reduced for most part to minutes of board meetings, many of which were taken by the former Cabinet Secretary, Lord Armstrong, with his customary economy with the elusive truth. No sooner had my book seen light of review (mostly favourable, though with one vituperation from Sir Jeremy Isaacs whose record of his achievements as general director differed somewhat from my estimation) than I received a letter from a lady unknown to me requesting — no, insisting — that I turn over to her my research materials for the purpose of a book that she was writing on four opera houses. Impressed as I was by Susie Gilbert's chutzpah and enterprise, I replied, politely in the circumstances, that the documents were not mine to bestow; she would need to contact the beneficial owners, most of whom were listed in my sources. She wrote again, even more pressingly. I think courtesy may have lapsed at her second approach and I did not reply. A scan of the source notes in the present work suggests that neither she nor her co-author had much access to material that might alter our view of the development of the world's four premier opera houses.

The Royal Opera House, La Scala, the Metropolitan Opera of New York and the Vienna State Opera are ranked in media perceptions as the world's Big Four, although the ranking is tenuous. With the exception of the Met, which can outspend all the rest put together, the league table fluctuates era by era. Over the past decade, the Kirov and Munich have hugely outshone the routinist regime in Vienna. La Scala under Ricardo Muti has latterly gone into suburban exile and embraced Andrew Lloyd Webber's Phantom by way of creative regeneration.

Covent Garden is back in the ascendant thanks, at last, to a music director who gives it more than a fragment of his attention. As for the Met, its removal of Alberto Vilar's name from the Grand Tier upon the billionaire's failure to make good his $30m pledge suggests that its pockets are not bottomless and its budgets arc suffering severe post-9/11 pinch. That, in two paragraphs, is the present state of play. You would not look to this book for critical acuity or for historical revelation. The co-authors, based in London and Jerusalem, have interviewed a number of operatic functionaries and mined various opera-house and newspaper archives for appropriate cuttings, the latter yielding a warm feeling that much of what you read here you must have read somewhere before. Susie Gilbert claims to have 'uncovered new material on the workings of boards and managements'. Exciting as this may sound to the average Pavarotti fan, the results seldom take us deeper into the human drama than the flannelling of a bland official record.

I am sure both authors are extremely well-intentioned and I wish them every success (as record labels say these days when sacking 15-year-old violinists), but I would he misleading readers were I to pretend that the 950-odd pages of this weighty enterprise were even passably useful or grippingly well written. I must not test the patience of The Spectator's award-winning literary editor; a random sample of narrative will suffice.

Solti's efforts to make Covent Garden a major international House continued almost as if without reference to the vicissitudes of subsidy changes and financial pressures. The 1958-59 arrangements with the Treasury and Arts Council whereby payments of 120,000 a year for five years would be made to cover the House's overdraft of £183.000 and to pay 43 per cent of 'allowable' costs had alleviated the situation. But a new formula based on the percentage of receipts during the preceding year ... (pp 239-40).

Are you still with me? The passage quoted, an unmasticated recapitulation of pure bureaucratese, is both inaccurate and meaningless. Georg Solti did not make his ROH debut until December 1959 and did not enter the pit as music director until September 1961. The conjunction here is a perfect non sequitur.

Solti certainly swore to raise standards at Covent Garden to what he deemed an 'international' level (namely the standard that prevailed in the two German provinces where he had previously held office). He set about his mission with terrifying ferocity, unforgettable to all who endured it.

'Almost as if without reference,' interposes Lady Gilbert, as if 'allowable costs' had any bearing on this hyper-energised revolution. Solti was aware, sure enough, of financial constraints, but he began by searing away at the nuts and bolts of performance, using a stick that cost no more than nineteen and sixpence and making savings with each notch of added professionalism.

An equivalent absence of sequiturs and analysis can be found every few pages in this worthy tome, interspersed with misreadings of human situations from the perspective of board minutes. To report Simon Rattle's ROH debut with The Cunning Little Vixen in June 1990, for instance, as a happy, well-planned occasion begs two questions: (a) why it took Rattle 10 years to answer Covent Garden's call and (b) why he refused to work there again for another decade. The answers, readily ascertainable, can be condensed onto the back of a postcard.

If you cannot afford this impressive book right now, bear in mind that it might be cheaper by Christmas. Every operahouse book comes down to this. The paperback of my own work. Covent Garden: The Untold Story (Simon & Schuster, 2000), arrived this month in the better class of remainder shop.