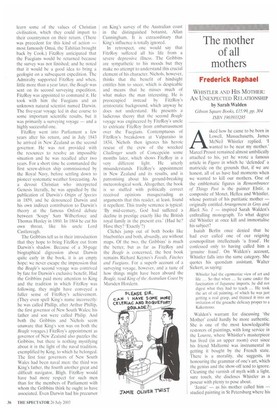 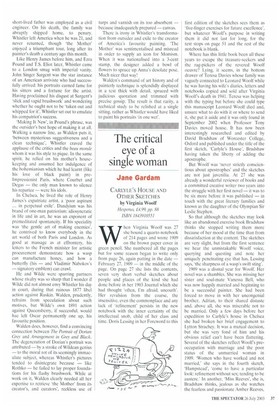 The mother of all mothers

WHISTLER AND HIS MOTHER: AN UNEXPECTED RELATIONSHIP by Sarah Walden

Asked how he came to be born in Lowell, Massachusetts, James McNeil Whistler replied, 'I wanted to be near my mother.' Marcel Proust remained almost umbilically attached to his, yet he wrote a famous article in Figaro in which he 'defended' a matricide on the grounds that, if we are honest, all of us have had moments when we wanted to kill our mothers. One of the emblematic figures in Remembrance of Things Past is the painter Elstir, a composite of Monet, Helleu and Whistler, whose portrait of his puritanic mother — originally entitled Arrangement in Grey and Black No. I — inspired Sarah Walden's enthralling monograph. To what degree did Whistler at once kill and immortalise his subject?

Isaiah Berlin once denied that he had ever called one of our reigning cosmopolitan intellectuals 'a fraud'. He confessed only to having called him a 'genuine fraud'. On Walden's account, Whistler falls into the same category. She quotes his quondam assistant, Walter Sickert, as saying:

Whistler had the egomaniac view of art and life ... So that when ... he came under the fascination of Japanese imports, he did not digest what they had to teach ... He took the art of oil painting, of which he was just getting a real grasp, and thinned it into an imitation of the gouache delicacy proper to a Kakemono.

Walden's warrant for discussing 'the Mother' could hardly be more authentic. She is one of the most knowledgeable restorers of paintings, with long service in the Louvre, where Whistler's masterpiece has lived (in an upper room) ever since his friend Mallarme was instrumental in getting it bought by the French state. There is a morality, she suggests, in honouring the grammar of one's art, which the genius and the show-off tend to ignore. Cleaning the varnish of myth with a light, sure touch, she discloses Whistler as a poseur with plenty to pose about.

short-lived father was employed as a civil engineer. On his death, the family was abruptly shipped home, to penury. Whistler left America when he was 21, and never returned, though 'the Mother' enjoyed a triumphant tour, long after its painter's death a century ago this month.

Like Henry James before him, and Ezra Pound and T.S. Eliot later, Whistler came to a London smug with imperial vanity. John Singer Sargent was the star instance of an American arriviste who had successfully arrived: his portraits earned fame for his sitters and a fortune for the artist. Having proclaimed his disgust at Sargent's 'slick and vapid brushwork' and wondering whether he ought not to be 'taken out and whipped for it', Whistler set out to emulate his compatriot's success.

'Making It New', in Pound's phrase, was the outsider's best hope of making it at all. Walking a narrow line, as Walden puts it, 'between mysterious suggestiveness and a clean technique', Whistler craved the applause of the critics and the beau monde whom it was his style to pique. In the same spirit, he relied on his mother's housekeeping and assumed her indulgence of the bohemianism which he had learnt (like his love of black paint) in preImpressionist Paris. where Courbet and Degas — the only man known to silence his repartee — were his idols.

In Chelsea, he lived the role of Henry James's expatriate artist, a 'poor aspirant ... in perpetual exile'. Dandyism was his brand of one-man patriotism: idiosyncratic in life and in art, he was an exponent of premeditated spontaneity. If his speciality was 'the gentle art of making enemies', he contrived to know everybody in the art world of both Paris and London. As good at massage as at effrontery, his letters to the French minister for artistic procurement demonstrate how a wasp can manufacture honey, and how a butterfly (his — and Vladimir Nabokov's — signatory emblem) can crawl.

He and Wilde were sparring partners whose rivalry was so sharp that I wonder if Wilde did not almost envy Whistler his day in court, during that ruinous 1877 libel action against Ruskin. Walden, prudently, refrains from speculation about such motives, but Wilde's own 1891 action against Queensberry, if successful, would hae left Oscar permanently one up, his favourite position.

Walden does, however, find a convincing connection between The Portrait of Dorian Grey and Arrangement in Grey and Black. The degeneration of Dorian's portrait was attributed — by a stroke of Wildean genius — to the moral rot of its seemingly immaculate subject, whereas Whistler's pictures tended to disintegrate because — like Rothko — he failed to lay proper foundations for his flashy brushwork. While at work on it, Walden clearly needed all her expertise to retrieve 'the Mother' from its creator's, and curators', reckless use of turps and varnish on its too absorbent — because inadequately prepared — canvas.

There is irony in Whistler's transformation from outsider and exile to the creator of America's favourite painting. 'The Mother' was sentimentalised and misread in order to supply an icon for Momism. When it was nationalised into a 3-cent stamp, the designer added a bowl of flowers to spruce up Anna's desolate pose. Much nicer that way!

Walden's command of art history and of painterly technique is splendidly displayed in a text thick with detail, spruced with judicious quotation and trimmed with precise gossip. The result is that rarity, a technical study to be relished at a single sitting, rather as Whistler would have liked to paint his portraits 'in one wet'.