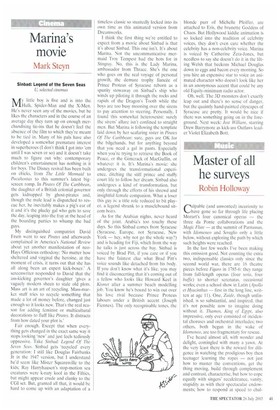 My little boy is five and is into the Hulk, Spider-Man and the X-Men. He's never seen any of the movies, but he likes the characters and in the course of an average day they turn up on enough merchandising tie-ins that he doesn't feel the absence of the film to which they're meant to be tied in. Many of his pals have also developed a somewhat premature interest in superheroes (I don't think I got into 'em until I was seven or so) and it doesn't take much to figure out why: contemporary children's entertainment has nothing in it for boys. The Disney revival has been built on chicks, from The Little Mermaid to Pocahontas to this summer's latest bigscreen romp. In Pirates Of The Caribbean, the daughter of a British colonial governor gets kidnapped by ghost-pirates and, though the male lead is dispatched to rescue her, he inevitably makes a pig's ear of it and it's the plucky gal who gets to save the day, leaping into the fray at the head of the boarding parties to whump the bad guys.

My distinguished compatriot David Frum went to see Pirates and afterwards complained in America's National Review about yet another manifestation of neoHays Officious orthodoxy: 'No matter how sheltered and virginal the heroine, at the moment of crisis, it turns out that she has all along been an expert kick-boxer.' A screenwriter responded to David that the ass-kicking governor's daughter 'gives a vaguely modern sheen to stale old plots. Mass art is an art of recycling. Mass-market stuff tries to recycle something that made a lot of money before, changed just enough so it looks new. That's the real reason for adding feminist or multicultural decorations to fluff like Pirates. It distracts from how dated your plot is.'

Fair enough. Except that when everything gets changed in the exact same way it stops looking 'new' and just feels tediously oppressive. Take Sinbad: Legend Of The Seven Seas. Sinbad gets 'recycled' every generation: I still like Douglas Fairbanks Jr in the 1947 version, but I understand he'd seem like Mister Squaresville to the kids; Ray Harryhausen's stop-motion sea creatures were k-razy kool in the Fifties, but might appear crude and clunky to the CGI set. But, granted all that, it would be hard to come up with an adaptation of a timeless classic so stuntedly locked into its own time as this animated version from Dreamworks.

I think the first thing we're entitled to expect from a movie about Sinbad is that it's about Sinbad. This one isn't. It's about Marina. Not the uncommunicative mermaid Troy Tempest had the hots for in Stingray. No, this is the Lady Marina, ambassador from Thrace. She's the one who goes on the real voyage of personal growth, the demure trophy fiancée of Prince Proteus of Syracuse reborn as a spunky stowaway on Sinbad's ship who winds up piloting it through the rocks and rapids of the Dragon's Tooth while the boys are too busy mooning over the sirens to pay attention to steering. Personally, I found this somewhat heterosexist: surely the sirens' allure isn't confined to straight men. But Marina is following the template laid down by her seafaring sister in Pirates Of The Caribbean: sure, guys are OK for the bilgehands. but for anything beyond that you need a gal in pants. Especially when you're trying to retrieve the Book of Peace, or the Gimcrack of MacGuffin, or whatever it is. It's Marina's movie: she undergoes the transformational experience, ditching the stiff prince and stuffy court life to follow her dream. Sinbad also undergoes a kind of transformation, but only through the efforts of his shrewd and insightful female companion. What a loser this guy is: a title role reduced to bit player, a legend shrunk to a musclebound sitcom bozo.

As for the Arabian nights, never heard of the joint. Arabia's too touchy these days. So this Sinbad comes from Syracuse (Syracuse, Europe, not Syracuse, New York — hey, why not go the whole way?) and is heading for Fiji, which from the way he talks is just across the bay. Sinbad is voiced by Brad Pitt, if you care or if you have the faintest clue what Brad Pitt's voice sounds like detached from his body. If you don't know what it's like, you may find it disconcerting that it's coming out of a fellow who looks like Howard Keel in Kismet after a summer beach modelling job. You know he's bound to win out over his love rival because Prince Proteus labours under a British accent (Joseph Fiennes). The only recognisable tones, the blonde purr of Michelle Pfeiffer, are attached to Eris, the brunette Goddess of Chaos. But Hollywood kiddie animation is so locked into the tradition of celebrity voices, they don't even care whether the celebrity has a non-celebrity voice. Marina is voiced by Catherine Zeta-Jones, but needless to say she doesn't do it in the lilting Welsh that beckons Michael Douglas down to eggs and bacon every morning. So you hire an expensive star to voice an animated character who doesn't look like her in an anonymous accent that could be any old Equity-minimum radio actor.

Oh, well. The 3D monsters don't exactly leap out and there's no sense of danger, but the quaintly hand-painted cityscapes of Syracuse are pretty. It would be nice if there was something going on in the foreground. Next week: Just William, starring Drew Barrymore as kick-ass Outlaws leader Violet Elizabeth Butt.