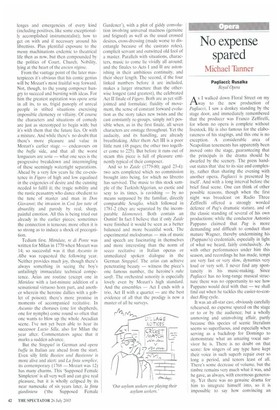 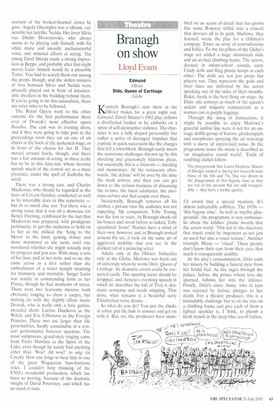 As I walked down Floral Street on my way to the new production of Pagliacci, I saw a donkey standing by the stage door, and immediately remembered that the producer was Franco Zeffirelli, for whom no opera is complete without livestock. He is also famous for the elaborateness of his stagings, and this one is no exception. A considerable area of Neapolitan tenements has apparently been moved onto the stage, guaranteeing that the principals in the drama should be dwarfed by the scenery. The press handout states that 'due to its size and complexity, rather than sharing the evening with another opera, Pagliacci is presented by itself'. And with a long interval before the brief final scene. One can think of other possible reasons, though when the first night was broadcast on Radio Three Leffirelli offered a strongly worded defence of Pag's dramatic stature, and of the classic standing of several of his own productions; while the conductor Antonio Pappano claimed that Pag is more demanding and difficult to conduct than mature Wagner, thereby undermining his (Pappano's) credentials, especially in light of what we heard, fairly conclusively. As with other performances under him this season, and recordings he has made, tempi are very fast or very slow, dynamics very loud or very soft. I never find any spontaneity in his music-making. Since Pagliacci has no long-range musical structure there was no opportunity to see how Pappano would deal with that — we shall find out when he tackles the easier-to-conduct Ring cycle.

It was an all-star cast, obviously carefully rehearsed, no expense spared on the stage or to or by the audience; but a wholly unmoving and uninvolving affair, partly because this species of scenic literalism seems so superfluous, and especially when serving as a backdrop for Domingo to demonstrate what an amazing vocal survivor he is. There is no doubt on that score: few singers of any type have kept their voice in such superb repair over so long a period, and tenors least of all. There's some decrease of volume, but the timbre remains very much what it was, and he gave, as always, with enormous generosity. Yet there was no genuine drama for him to integrate himself into, so it is impossible to say how convincing an account of the broken-hearted clown he gave. Angela Gheorghiu was a vibrant, vulnerable but ladylike Nedda. Her lover Silvio was Dmitri Hvorostovsky, who always seems to be playing only himself, with his white mane and smooth, uncharacterful voice, and minimal efforts at acting. The young Danil Shtoda made a strong impression as Beppe, and probably after first-night nerves Lado Ataneli would be a plausible Tonio. You had to search them out among the props, though, and the stolen minutes of love between Silvio and Nedda were absurdly played out in front of innumerable dwellers in the building behind them. If you're going to be this naturalistic, there are strict rules to be followed.

The Royal Opera went to the other extreme for the first performance there ever of Dvorak's most effective opera Rusalka. The cast was in evening dress, and if they were going to take part in the proceedings soon they sat on one of six chairs at thc back of the darkened stage, or in front of the chorus for Act II. They moved around freely, though, and there was a fair amount of acting, as there really has to be in this fairy-tale whose heroine spends much of the central act as a mute presence, under the spell of Jezibaba the witch.

There was a strong cast. and Charles Mackerras. who should be regarded as the hero of Covent Garden, conducted as well as he invariably does in this repertoire — but in so much else too. Yet there was a strong sense that it was all a showcase for Ren& Fleming, reinforced by the fact that Mackerras was prepared, with prodigious pertinacity. to get the orchestra to hold on to her as she milked the 'Song to the Moon' to the limit, getting slower and more mannered as she went, until one wondered whether she might actually stop its progress and just coo. With many a toss of her hair, pull at her stole, and so on, she came across as a diva rather than the embodiment of a water nymph straining for humanity and mortality. Sergei Larin was mainly in commanding form as her Prince, though he had moments of stress. There were two fearsome mezzos, both obviously longing to chew a carpet, but making do with the slightly effete music Dvorak. who is really only a lyric genius, awarded them: Larissa Diadkova as the Witch, and Eva Urbanova as the Foreign Princess. These two are larger than life personalities, hardly containable in a concert performance however spacious. The most sumptuous, grand-style singing came from Franz Hawlata as the Spirit of the Lake, even though he rarely had anything other than 'Woe! Ah woe!' to sing (in Czech). How one longs to hear him in one of the great Wagnerian bass-baritone roles. I couldn't help thinking of the ENO's wonderful production, which has been so moving, because of the dramatic insight of David Pountney, and which has no need of stars.