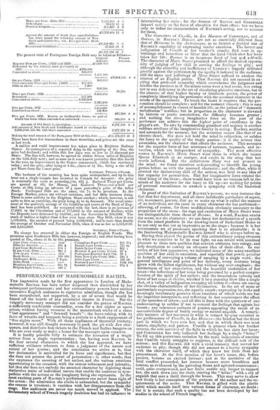 THE impression made by the first appearance in London of Made- moiselle RACHEL has been rather deepened than diminished by her subsequent performances ; and her extraordinary powers have excited successive English audiences to rapturous admiration, though she has been encumbered, not supported, by a set of actors that would be hissed off the boards of any provincial theatre in France. But the vulgarly mercenary manager did not consider the genius of RACHEL a sufficiently marketable commodity, even for a few nights at opera prices, without having recourse to the mountebank tricks of a sham "last appearance" and "farewell benefit" : the leave-taking, with its farce of wreaths and bouquets being a prelude to a fresh engagement of "five nights more." With all these appliances of theatrical trickery, however, it was still thought necessary to pack the pit with Jew clae- queurs, and distribute box-tickets to the French and Italian hangers-on who are ever ready to make a house for the manager upon occasion. It is hardly possible fully to estimate the resources of a tragic actress from a single representation ; but, having seen RACHEL in the four several characters in which she has appeared, we have sufficient evidence whereon to form a judgment of the nature and extent of her genius ; and the conclusion we arrive at is, that her declamation is unrivalled for its force and significance, but that she does not possess the power of personation : ir other words, that she expresses the meaning of her author, and the various emotions appertaining to the occasion, with the utmost refinement and intensity, but that she does not embody the assumed character by depicting those distinctive traits of individual nature that enable the audience to sym- pathize with the actress as the imaginary being she represents. In the most exciting parts of RACHEL'S performances one never loses sight of the artiste: the admiration she elicits is unbounded, but the sympathy she creates is transient; it vanishes with her disappearance from the stage. Her audiences are never too much moved to applaud. The declamatory school of French tragedy doubtless has had its influence in determining her style ; for the dramas of RACINE and Coassir.r.r, depend mainly on the force of elocution for their effect : but we have only to define the characteristics of RACHEL'S acting, not to account for them.

The characters of Camille, in Les Horace: of CORNEILLE, and of Rozane, in RACINE'S Bajazet, are not so essentially different from that of Hermione in the Andromague, as to furnish a decided test of RACHEL'S capability of expressing tender emotions. The horror and indignation of Camille at her brother's cruelty find vent in up-

takes her life : Rosane is an incarnate fiend of lust aid self-will. The character of Marie Stuart promised to afford the desired opportu-

nity of judging of her skill in moving the feelings to pity ; and although the absurdity and inefficiency of LE:anuses tragedy militated greatly against the performer, by the apathy it induced in the audience,

still the name and sufferings of Mary Stuart sufficed to awaken the interest of an English public. That RACHEL did not succeed in ex- citing that profound sympathy which overwhelms the judgment and

kindles the passions as if the mimic scene were a real event, was owing not to any deficiency in the art of simulating plaintive emotions, but to the absence of that higher faculty of histrionic genius, the power of completely identifying the performer with the assumed character in the minds of the spectators. To touch the heart it requires that the per- sonation should be complete ; and for the moment illusory : this is easy of accomplishment in scenes of humble life, as the pathos of " domestic melodramas" testifies ; but in proportion as the character is elevated by historic or poetic associations, the difficulty becomes greater ;

player's art. To awe by commanding grandeur and majesty is another

sublime attribute of the imaginative faculty in acting : RACHEL startles and astounds for the moment, but the sensation ceases like that of an

electric shock. She does not hold the mind in subjection, or subdue the fancy to the quality of the tragic passion : it is the actress that astonishes, not the character that affects the audience. This accounts for the superior force of her utterance of sarcasm, reproach, and in-

vective, which are independent of sympathy. The most effective scenes in RACHEL'S Marie Stuart were those in which she taunts

Queen Elizabeth as an usurper, and exults in the sting that her words inflicted. But the unfortunate Mary was not present to the mind : we found ourselves endeavouring to identify the young genius before us with the assumed character ; and the effort, while it attested the declamatory skill of the actress, was fatal to any idea of her capacity for personztion. Had her imaginative force created the ideal being of the drama, there would have been no vacuum left in the minds of the audience for the fancy to fill up—no seeking for points .of personal resemblance to awaken a sympathy with the historical character.

In proof of this limitation of RACHEL'S powers, we may instance the fact that her deportment, and all those indefinable particulars of aspect,

air, movement, gesture, that go to make up what is called the manner

of an individual, are the same in every character she has performed— allowing, of course, for those modifications obviously necessary to the proprieties of the scene : the rage and exultation of Marie Stuart were not distinguishable from those of Rorane. In a word, RACHEL enacts the scene, not the character : we can fancy her declamation of a speech

from the raised platform in the drawing-room of Sutherland House to be not only as fine but as impressive as on the stage ; because it is her consummate art of passionate speaking that is so admirable : it is

the fascinating Mademoiselle RACHEL herself who is always before us.

Having thus placed the genius of this extraordinary young creature in what we conceive to be its true light, we can revert with unmixed pleasure to those rare qualities that convert criticism into eulogy, and

defy description to convey an adequate idea of their effect. In our notice of her first appearance, we indicated some of the many excellent

qualities of her skill in execution, and especially that power, peculiar to herself, of conveying a volume of meaning by a single word : the general intelligence and point of her delivery, every sentence being

given with the fullest significance, but without any over-emphasis; the

distinctness of her enunciation, and the beautiful modulation of her tones—the inflections of her voice being governed by a perfect compre- hension of the spirit of her author ; and the tremendous velocity and

force of her coups de MEd Ire, whether it be a stunning blow like a single shot, or a volley of indignation sweeping all before it—these are among the obvious characteristics of her declamation. In the art of mute or pantomimic expression, too, she equally excels ; expressing by looks and seemingly involuntary gestures those emotions of which words are but

the imperfect interpreters, and reflecting in her countenance the effect of the speeches of others ; and all this is done with the quietness of one endeavouring to subdue if not to conceal the feelings that agitate her bosom ; any vehement outburst of passion appearing the result of an uncontrollable degree of bodily energy or mental anguish. A remark- able instance of her resources in what is termed by-play occurred in

her performance of Camille, in Les Horaces—the briefest but the finest part in which we have seen her, and that in which there was most nature, simplicity, and pathos. Camille is present when her brother returns, the sole survivor of the fight ilk which he has slain her lover; and CORNEILLE has only indicated her feelings by a single " helas !" To fill up this portentous omission by the mute indications of emotion that Camille vainly struggles to suppress, is the difficult task of the actress ; and this RACHEL did with a vivid intensity that moved her audience to pity, though this did not amount to a hearty sympathy with the character itself, of which they knew but little from her presentment. At the first mention of her lover's name, she, before passive, became an excited listener ; and as the narrative of the fatal conflict proceeded, her interest became more breathless and intense, as evidenced by the quivering frame and agitated countenance ; until, quite overpowered, and her limbs unable any longer to support her, she sank down into the chair, uttering the " helas !" with a cry of anguish that sent a thrill through the house. This may serve to show how lively is her conception of the purpose of the author and the re- quirements of the scene. That RACHEL is gifted with the plastic spirit which moulds itself into various forms of character, we doubt ; but it is certain that such a quality has not been developed by her studies in the school of French tragedy.