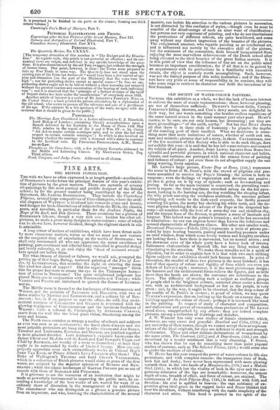 THE wish we have so often expressed is at length gratified—a collection of STOTHARD'S works forms the principal feature of this year's exhibi- tion of pictures by the great masters. There are upwards of seventy oil-paintings by this most poetical and prolific designer of the British school; by far the greater number being contributed by one of the Governors, Mr. SAMUEL BODDINGTON. They include the Canterbury Pilgrims, several large compositions of fetes-champetre, where the artifi- cial elegance of WATTEAU is idealized into romantic grace and beauty, and designs for book-illustrations of subjects from the Bible, the classics, poets, and novelists, in particular those for the Arabian Nights, the Rape of the Loch, and Don Quixote. These constitute but a portion of STOTHARD'S labours, though a very rich one: besides his other oil- pictures, he made a great many designs in water-colours ; none of which can be shown here, however finished, though the slightest sketch in oils is admissible.

A long arrear of notices of exhibitions, which have been thrust aside by more clamorous matters, warns us that we must not now venture on the congenial duty of expatiating on the merits of STOTHARD : we shall only recommend all who can appreciate the rarest excellence of painting, pure sentiment and etherial fancy embodied in graceful design and lovely colouring, to go and enjoy the "feast of nectared sweets" here spread out before them.

But what dtemon of discord or dulness, we would ask, prompted the putting up of that huge, flaring, teaboard painting of the Fire of Lon- don, by LursiErinounc, that scorches the sight on entering the room like a red-hot sheet of copper ? Did the sagacious " manager " think this the proper key-note to attune the eye to the Titianesque harmo- nies of colour in STOTHARD ? The same enlightened judgment has placed MORLAND in conjunction with TINTORETTO and 'Ferias ; while VERNET and FANINI are introduced to quench the flames of LUTHER- BOURG.

The Middle room is devoted to the landscapes of GAINSBOROUGH and WILSON, and the portraits of REYNOLDS and HOGARTH, With two or three studies by NEWTON and EDMONSTONE, and a solitary bit of Bosi- INGTON : but, as if on purpose to mar the effect, the cold, liny archi- tectural neatness of CANALETTO and GUARD! is contrasted with the glowing negligence of GAINSBOROUGH and the luminous freshness of WILSON; while a colossal St. Christopher, by ANNIBALE Caaacci, starts from the wall like the blind giant Orion, blundering among the trees and houses.

The North room contains as strange a medley of schools and subjects as ever was seen at an auctioneer's ; the finest chefs d'ceuvre and the most palpable pretenders are hung side by side : GUIDO and JAN STEEN, TENLERS and LEONARDO, RAPHAEL and °STADE, are jumbled together in most admired disorder. Lord Ashburton's exquisite LEONARDO the Infant Christ and St. John with the Lamb, and Earl Cow per's Virgin and Child by RAPHAEL, are worthy of a room to themselves ; at least they ought to be surrounded by works of kindred beauty. How can one properly appreciate even such extraordinary works as Colonel Hay's Jolts VAN EYCK, or Prince Albert's Luci CRANACH after them ? The Duke of Wellington's TEETERS and Lord Crewe's VANDERNEER, which in a collection of Dutch pictures would shine as gems of the first water, are eclipsed by the superior splendour of RUBENS and REM- BRANDT ; while the classic landscapes of GASPAR Poussts put us out of conceit with those of BERGHEM and PYNACKEIL It is grievous to see the resources of an institution that might be made so powerfully instrumental in improving the public taste, by ex- tending a knowledge of the best works of art, wasted for want of an ordinary share of discretion in the management of its exhibitions. The connoisseur who can distinguish at a glance a genuine picture from an imposture, and who, knowing the characteristics of the several

masters, can isolate his attention to the various pictures in succession, is not distracted by this confusion of styles,—though even he must be sensible of the disadvantage of such an utter want of classification ; bat persons not very cognisant of painting, and who do not discriminate the productions of different schools, are quite bewildered, and come away without any distinct impression of the beauties of the pictures. The enlightened amateur, who regards painting as an intellectual art, and is influenced not merely by the executive skill of the picture, but the sentiment of the conception, finds himself incapacitated from enjoying the most marvellous achievements of the Dutch school after being elevated to the ideal beauties of the great Italian masters. It is in this point of view that the influence of fine art on the public mind becomes an important consideration; for if all that is to be gained by an acquaintance with its productions be a familiarity with executive details, the object is scarcely worth accomplishing. Such, however, was not the limited purpose of this noble institution ; and if the Direc- tors have any pride or sense of responsibility in its conduct, they will take some steps to retrieve its character and fulfil the intentions of its first founders.