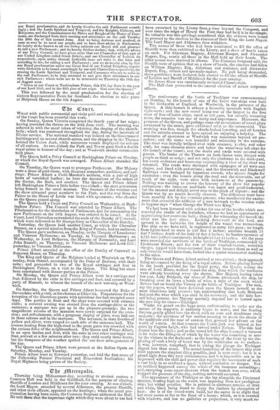 WHAT with public ceremonial and visits paid and received, the history of the Court has been eventful this week.

On Sunday, Queen Victoria completed the fourth year of her reign ; having ascended the throne on the 20th June 1837. The morning was

ushered in with the usual token of rejoicing, the ringing of the church- bells ; which was continued throughout the day, during the intervals of Divine service. The national standard was hoisted on the Government buildings and on several church-spires, and the shipping in the Thames hoisted the Union Jack, while numerous vessels displayed the colours of all nations. At two o'clock the Park and Tower guns fired a double royal salute in honour of the day ; and at Woolwich similar ceremonies took place.

The Queen held a Privy Council at Buckingham Palace on Monday, at which the Royal Speech was arranged. Prince Albert attended the Council.

On Tuesday, the Queen went to prorogue Parliament. Her Majesty wore a dress of gold tissue, with diamond stomacher, necklace, and ear- rings : Prince Albert a Field-Marshal's uniform, with a pair of high boots of varnished leather ; he bore the decorations of the orders of the Garter, the Bath, and another. The Queen and Prince Albert left Buckingham Palace a little before two o'clock ; the state procession being formed in the usual manner. The fineness of the weather and the show attracted great numbers to the Park, and the way from the Palace to the House of Lords was lined with spectators ; who cheered as the Queen passed along. The Queen held a Court and Privy Council on Wednesday, at Buck- ingham Palace. The Council was attended by Prince Albert. The Proclamation for the dissolution of Parliament, and for summoning the new Parliament on the 19th August, was ordered to be issued. At the Court, Lord Clarendon surrendered the seals of the Dutchy of Cornwall, which were delivered to Sir George Grey as Chancellor of the Dutchy. Yesterday, the Queen held another Court, at which the Chevalier Bunsen, on a special mission from the King of Prussia, had an audience.

The King and Queen of the Belgians lauded at Woolwich on Wed- nesday, from Ostend, accompanied by the Duke of Brabant, with their suite ; and proceeded in two of the Royal carriages and four to Buckingham Palace, on a visit to the Queen. The King has since been entertained with dinner-parties at the Palace.

On Monday, the Queen and Prince Albert went in a carriage and four, followed by the suite in five carriages and four, and escorted by a party of Hussars, to witness the launch of the new war-ship at Wool- wich.

On Saturday, the Queen and Prince Albert honoured the Duke of Devonshire with a visit, at his chateau at Chiswick. Preparations for the reception of the illustrious guests with splendour due had occupied some days. The portico in front and the steps were covered with crimson cloth ; a covered awning was erected from the carriage-drive to the entrance; a marquee was put up in the pleasure-grounds ; the two magnificent saloons of the mansion were newly carpeted for the occa- sion; and refreshments, with a gorgeous display of plate, were laid out in these saloons and in the marquee. The servants, in state liveries of yellow and silver, were ranged on each side of the entrance-hall. The avenue leading from the high-road to the great gates was crowded with the curious folks of the neighbourhood. The Queen and Prince Albert, in an open landau and four, with the suite in two other carriages and four, arrived at a few minutes after two : they staid nearly three hours; but the dampness of the weather spoiled the out-door arrangements of the day. The Queen and Prince Albert were present at the Italian Opera on Saturday, Monday, and Tuesday. Prince Albert went to Norwood yesterday, and laid the first stone of the Fellowship Porters' Provident and Benevolent Institution; his Royal Highness being patron of the Society.