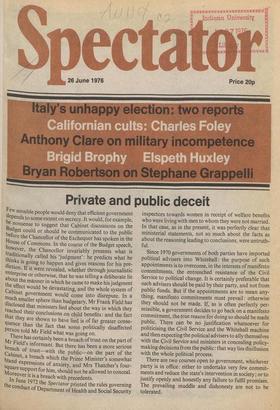 Few sensible people would deny that efficient government depends to some extent on secrecy. It would, for example, be nonsense to suggest that Cabinet discussions on the Budget could or should be communicated to the public before the Chancellor of the Exchequer has spoken in the House of Commons. In the course of the Budget speech, however, the Chancellor invariably presents what is traditionally called his 'judgment' : he predicts what he thinks is going to happen and gives reasons for his prediction. If it were revealed, whether through journalistic enterprise or otherwise, that he was telling a deliberate he about the manner in which he came to make his judgment the effect would be devastating, and the whole system of Cabinet government would come into disrepute. In a much smaller sphere than budgetary, Mr Frank Field has disclosed that ministers lied about the way in which they reached their conclusions on child benefits: and the fact that they are shown to have lied is of far greater consequence than the fact that some politically disaffected Person told Mr Field what was going on. There has certainly been a breach of trust on the part of Mr Field's informant. But there has been a more serious breach of trust—with the public—on the part of the Cabinet, a breach which the Prime Minister's somewhat bland expressions of anxiety, and Mrs Thatcher's foursquare support for him, should not be allowed to conceal. Moreover it is a breach with precedents. In June 1972 the Spectator printed the rules governing the conduct of Department of Health and Social Security inspectors towards women in receipt of welfare benefits who were living with men to whom they were not married. In that case, as in the present, it was perfectly clear that ministerial statements, not so Much about the facts as about the reasoning leading to conclusions, were untruthful.

Since 1970 governments of both parties have imported political advisers into Whitehall: the purpose of such appointments is to overcome, in the interests of manifesto commitments, the entrenched resistance of the Civil Service to political change. It is certainly preferable that such advisers should be paid by their party, and not from public funds. But if the appointments are to mean anything, manifesto commitments must prevail : otherwise they should not be made. If, as is often perfectly permissible, a government decides to go back on a manifesto commitment, the true reason for doing so should be made Public. There can be no justification whatsoever for politicising the Civil Service and the Whitehall machine and then expecting the political advisers to ally themselves with the Civil Service and ministers in concealing policymaking decisions from the public: that way lies disillusion with the whole political process.

There are two courses open to government, whichever party is in office: either to undertake very few commitments and reduce the state's intervention in society; or to justify openly and honestly any failure to fulfil promises. The prevailing muddle and dishonesty are not to be tolerated.