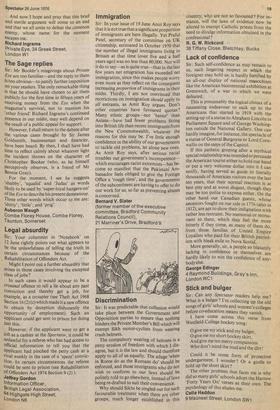 are too familiar—and the reply to them is too obvious—to justify further imposition on your readers. The only remarkable thing IS that he should have chosen to air them Publicly for the first time in fifteen years of receiving money from the Eye when the magazine's survival, not to mention his 'other friend' Richard Ingrams's continued Presence in our midst, may well depend on the result of a public appeal for support.

However, I shall return to the debate after the various cases brought by Sir James Goldsmith, businessman and financier, have been heard. By then, I shall have had time to reflect calmly about whatever light the incident throws on the character of Christopher Booker (who, as he himself Perceptively observes, is a friend of Mr Bennie Gray).

For the moment, I see he suggests 'shabby', 'squalid' and 'Judas' as words likely to be used by 'super-loyal hangers-on' of the Eye to describe his present demeanour. Three other words which occur to me are: