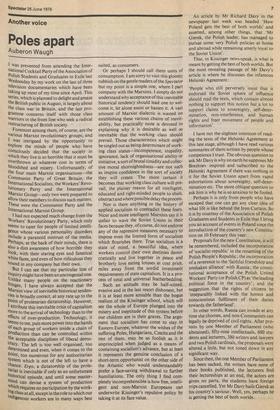 Auberon Waugh I was prevented from attending the International Cocktail Party of the Association of Polish Students and Graduates in Exile last Wednesday by my work on the last of three television documentaries which have been taking up most of my time since April. This series, which is planned to delight and amaze the British public in August, is largely about the class war in Britain, and the last programme concerns itself with those class warriors in the front line who seek a radical restructuring of British society.

Foremost among them, of course, are the various Marxist revolutionary groups, and I was intrigued by the opportunity to explore the minds of people who have consciously decided that the society in Which they live is so horrible that it must be overthrown at whatever cost in terms of bloodshed and misery. Unfortunately, of the four main Marxist organisations—the Communist Party of Great Britain, the International Socialists, the Workers' Revolutionary Party and the International Marxist Group—only two were prepared to allow their members to discuss such matters. These were the Communist Party and the International Marxist Group.

I had not expected much change from the Workers' Revolutionary Party, which only seems to cater for people of limited intelligence whose various personality disorders Include a paranoid mistrust of the media. Perhaps, at the back of their minds, there is also a dim awareness of how horrible they look, with their staring eyes and fanatical White faces, and even of how ridiculous they sound in any company but their own.

But I can see that my particular line of Inquiry might have been an uncongenial one. Unlike many people on the reactionary fringes, I have always accepted that the Marxist view of inevitable historical tendencies is broadly correct, at any rate up to the Point of proletarian dictatorship. However, I attribute this inevitable crisis of capitalism more to the arrival of technology than to the effects of over-production. Technology, it seetns to me, puts more power into the hands of each group of workers inside a chain of Production than can be controlled within the acceptable disciplines of liberal democracy. The left• is too well organised, too determined and even, when it comes to the Point, too numerous for any authoritarian sYstem which is not of the left to have a Chance . Ergo, a dictatorship of the proletariat is inevitable if only as an unfortunate historical episode, and until some mastermind can devise a system of production vv. hich requires no participation by the work!118 class at all, except in the role to which our Indigenous workers are in many ways best

Or perhaps I should call them units of consumption. I am sorry to visit this gloomy rubbish on the gentle readers of the Spectator but my point is a simple one, where I part company with the Marxists. I simply do not understand why acceptance of this inevitable historical tendency should lead one to welcome it, let alone assist or hasten it. A vast amount of Marxist dialectic is wasted on establishing these various chains of inevitability, but practically none is devoted to explaining why it is desirable as well as inevitable that the working class should prevail. Those characteristics which might be singled out as being determinant of working class status—incompetence, stupidity, ignorance, lack of organisational ability or initiative, a sort of brutal timidity and collective moral shortsightedness—are not such as inspire confidence in the sort of society they will create. The more certain it becomes that working class culture will prevail, the plainer reason for all intelligent, educated and right-minded people to shun. obstruct and where possible delay the process.

Nor is there anything in the history of applied socialism to contradict these fears. Nicer and more intelligent Marxists say it is unfair to wave the Soviet Union in their faces because they, of course, do not endorse any of the repressive measures necessary to impose even the limited form of socialism which flourishes there. True socialism is a state of mind, a beautiful idea, where workers control their own destinies democratically and live together in peace and brotherly love eating lotuses at cost price, miles away from the sordid investment requirements of state capitalism. It is a process of total and universal featherbedding.

Such an attitude may be half-witted, evasive and in the last resort dishonest, but it is at least more amiable than the bogus realism of the Kissinger school, which will see the whole of Europe plunged into the misery and ineptitude of this system before our children are in their graves. The argument that socialism has come to stay in Eastern Europe, whatever the wishes of the suffering Poles, Hungarians, Czechs and the rest of them, may be as foolish as it is unprincipled when judged as a means of containing socialism's advance, but at least it represents the genuine conclusion of a short-term opportunist on the other side of the Atlantic who would understandably prefer a face-saving withdrawal to further humiliations. The only thing I find completely incomprehensible is how free, intelligent and non-Marxist Europeans can underwrite Kissinger's repulsive policy by taking it at its face value.

An article by Mr Richard Davy in the newspaper last week was headed 'How Poland gets the best of both worlds' and asserted, among other things, that 'Mr Gierek, the Polish leader, has managed to pursue some very Polish policies at home and abroad while remaining utterly loyal to the Soviet Union'.

That, in Kissinger news-speak, is what is meant by getting the best of both worlds. But the most revealing passage of Mr Davy's article is where he discusses the infamous Helsinki Agreement : 'People who still perversely insist that it endorsed the Soviet sphere of influence should read the texts, which contain almost nothing to support this notion but a lot to support claims to sovereignty, self-determination, non-interference, and human rights and freer movement of people and information'.

I have not the slightest intention of reading the texts of the Helsinki Agreement at this late stage, although I have read various summaries of them written by people whose competence I trust. The obvious question to ask Mr Davy is why on earth he supposes Mr Brezhnev inspired and subscribed to the Helsinki Agreement if there was nothing in it for the Soviet Union apart from vapid exhortations about sovereignty, self-determination etc. The more oblique question to ask him is why he is so anxious to be fooled.

Perhaps it is only from people who have escaped that one can get any clear idea of what life is like behind the Iron Curtain. So it is by courtesy of the Association of Polish Graduates and Students in Exile that I bring you an account of events in Poland since the introduction of the country's new Constitution on 10 February this year.

Proposals for the new Constitution, it will be remembered, included the incorporation of 'socialist republic' in the renaming of the Polish People's Republic ; the incorporation of a reverence to the 'faithful friendship and unshaken alliance' with Russia; the constitutional acceptance of the Polish United Workers' Party (or Polish CP) as 'the leading political force in the country' ; and the suggestion that the rights of citizens be 'inseparably linked with the honest and conscientious fulfilment of their duties towards the fatherland'.

In other words, Russia can invade at any time she chooses, and non-Communists can legally be deprived of civil rights. After protests by one Member of Parliament (who abstained), fifty-nine intellectuals, 600 students and lecturers, 380 writers and lawyers and two Polish cardinals, the proposals were altered a little, but not toned down in any significant way.

Since then, the one Member of Parliament has been sacked, the writers have none of their books published, the lecturers find their lectureships at an end, the actors are given no parts, the students have foreign trips cancelled. Yet Mr Davy hails Gierek as his country's saviour. Well, yes, perhaps he is getting the best of both worlds.