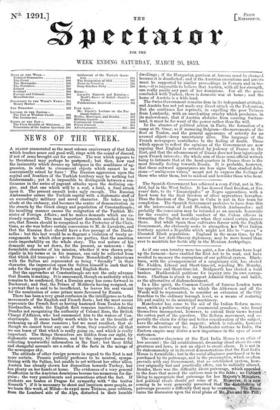 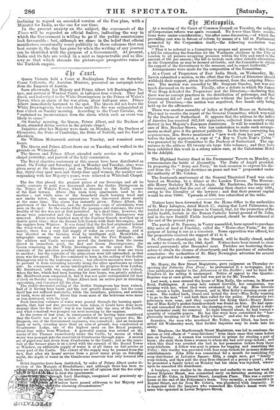 As if our own Country were too quiet, a few

elections have kept up the ferment—have enabled the Riot Act to be read, and have recalled to memory the corruptions of our political system. Black- burn, with the accompaniment of a sanguinary riot, has elected Mr. Fielden, Liberal and Short-time-ist, rejecting Mr. Hornby, Conservative and Short-time-ist. Bridgnorth has elected a local banker. Huddersfield petitions for inquiry into its own corrup- tions. Chatham is about to support Admiral Stirling and ballot, as the alternative, of disfranchisement.

In a like spirit, the Common Council of famous London town has appointed a Committee, in which the Aldermen and all the Wards will be represented, to consider an extension of the City franchise to the ordinary borough level, as a means of restoring life and reality to its municipal machinery.

Manchester has come to the aid of the Indian Reform move- ment, with a public meeting of commercial grandees; who found themselves incompetent, however, to extend their views beyond the cotton part of the question. The Reform movement, and es- pecially the claim for delay and better consideration of the subject, have the advantage of the support; which is valuable, however narrow the motive may be. As Manchester cottons to India, the -Eastern empire may derive a new importance in the eyes of some statesmen.

The counter eloquence at the East India House is an affair of less account : the old establishment, dreaming aloud about its own Freatness and laws, is not an object to create alarm. It is not in its statesmanship or in its overt demonstrations that the its India. House is formidable ; but in the social allegiance purchased or to be purchased by its patronage, and in the presumption, which so often prevails with any Government, that no established system, how- ever originally bad and practically effete, can be radically altered. Besides, there was the difficulty about patronage, which appealed to the fears that moved the envious man in the fable ; no Cabigett liking to appropriate that patronage for her Majesty's Ministers, lest political rivals should get some of it. Ifojvever, it now coming to be very generally perceived that the-distribitibn of patronage presents a difficulty that may be overcome. The Times turns the discussion upon the rival plans of Mr. Xox.and Mr. Pitt ;

inclining to regard an amended version of the Fox plan, with a Minister for India, as the one for our time.

In the present anxiety on the subject, the arguments of the Times will be regarded as official"feelers, indicating 'the way -in which the Government is willing to go if the public muntenance look favourable : but, although we share in the belief that official manifestoes occasionally court publicity in those columns that can best secure it, the day has gone by when the writing of any journal can be identified with the purpose of a Government. At present, India and its fate are veiled in a mist as impenetrable and as illu- sory as that which shrouds the picturesque prospective ruins of the Turkish empire.