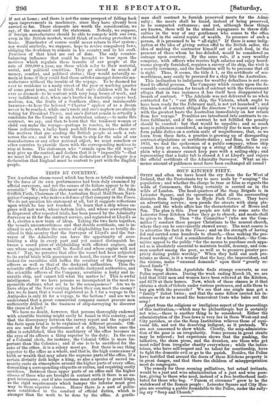 OFTEN and often we have heard the cry from the far West of Ireland, that the Protestants try to save souls by "souping" the population ; and whether the charge be true or false as regards the wilds of Connemara, the thing certainly is carried on in the wilds of London. The head-quarters of the Soup Brigade is in Leicester Square, and its operations affect all the surrounding districts from Temple Bar 'to Hyde Park Corner. They have an advertising service ; men parade the streets with slung pla- cards, and the whole affair has the characteristics of Moses and Son. The plan is this. Poor people are told to come unto the Leicester Soup Kitchen before they go to church, and meals shall be given to them. Then " the Committee " (who are the Com- mittee ?) conduct these pauper Christians to the nearest church, where they can be conveniently stowed away. The next course is to advertise the fact in the Times ; and on the strength of having fed and carried some hundreds to church,—thus making the pro- fessed worship of God a consideration for a breakfast,—the Com- mittee appeal to the public "for the means to purchase such appa- rel as is absolutely essential to maintain health, decency, and com- mon comfort among the poor, as well as to preserve greater pro-. priety during public worship." When they hold out such pre- miums as these, is it a wonder that the lazy, the improvident, and the vicious, make "unusual demands" upon their "greatly re- duced funds "?

The Soup Kitchen Apostolate finds strange converts, as our Police report shows. During the week ending March 19, we are told that 3522 men and women have been relieved at the Kitchen, and 6179 at their homes. Now, which of these classes is it that obtains a stock of tickets under various pretences, and sells them to buy gin with the proceeds? We see that one single man got a " family " ticket twice ; and that the same fellow carried his in- solence so far as to assail the benevolent Crate who bales out the soup ! Apart from the religious or irreligious aspect of the proceedings of this institution,—which may be philanthropic but is certainly not wise,—there is another thing to be considered. Either the administration of the Poor-laws is very lax in these West-end and City parishes, or else the Soup Institution relieves those of equi- vocal life, and not the deserving indigent, as it pretends. We are not concerned to show which. Clearly, the soup-administra- tion of the poor is an irregularity. Some persons in great straits may be relieved ; but experience shows that the pushing, the talkative, the sham pious, and the drunken, are those who get most relief from irregular charity everywhere ; while the indus- trious, who have self-respect and no talent for courtiership, have to fight the domestic evil or go to the parish. Besides, the Police have testified that around the doors of these Kitchens property is in great danger, and that there the children of misappropriation most do congregate.

The remedy for these seeming palliatives, but actual irritants, would be a just and wise administration of a just and wise poor- law, giving to those who need, instead of a free brotherhood insti- tuted for those who beg. " Panem et eireenses " grew to be the watchword of the Roman people : Leicester Square and City Hos- pice are creating a public formidable to the Police, under the rally- ing cry "Soup and Church."