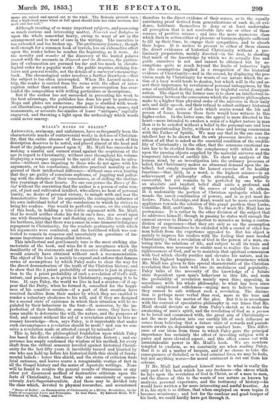 }HALL'S BASES OF BELIEF. * ARROGANCE, acrimony, and unfairness, have so

frequently been the characteristic marks of controversial works in defence of Christian- ity, that the entire absence of these qualities from a work of this description deserves to be noted, and placed almost at the head and front of the judgment passed upon it. Mr. Miall has succeeded in making a manful and earnest stand against the scepticism of the age in regard to Christianity, without once throughout his volume displaying a temper opposed to the spirit of the religion he advo- cates—without once imputing to those who do not agree with his arguments, or his conclusions, defective practical morality as the ground of their intellectual difference—without once even hinting that they are guilty of conscious sophisms, of juggling and palter- ing with the dictates of their consciences, or of stifling the instinc- tive yearnings of their hearts. No one can peruse the Bases of Be- lief without the conviction that the author is a person of calm tem- per, of just and cultivated intellect, who allows no heat of personal vanity, no desire of personal victory, to mingle with and mar the demonstrative force of his arguments, the contagious influence of his own individual belief of the conclusions to which he strives to bring his readers. One would be perfectly secure, on the evidence of this book, in holding a tete-a-tete argument with Mr. Miall, that he would neither shake his fist in one's face, nor scowl upon one with threatening brow and flashing eye, nor, like too many of his brethren, hint that there was a cause in some immoral indulgence repugnant to Christianity, for the resolute pertinacity with which his arguments were combated, and the hardihood which was con- tented to remain in suspense and uncertainty on questions of im- mense importance and unequalled interest.

This intellectual and gentlemanly tone is the most striking cha- racteristic of the book, and wins for it an acceptance which the familiarity of its statements and its excessive diffuseness of style would scarcely have obtained without such a recommendation. The object of the book is mainly to expand and enforce that famous series of assumptions by which Paley seeks to clear the way for the direct demonstration of the truth of the Christian history, and to show that the a priori probability of miracles is just in propor- tion to the A. priori probability of such a revelation of God's will, nature, and purpose, as is given in Christianity, supposing it to be true. If, says Paley, the world we live in had a creator—if it ap- pear that the Deity, when he formed it, consulted for the happi- ness of his sensitive creation—if a part of that creation have received faculties from their maker by which they are enabled to render a voluntary obedience to his will, and if they are designed for a second state of existence in which their situation will be re- gulated by their behaviour in the first—if, moreover, by the im- perfection of their faculties, or some other cause, they have be- come unable to determine the will, the nature, and the purposes of God, and cannot without the aid of a revelation attain to this ne- cessary knowledge—then, says Paley, is it improbable that under such circumstances a revelation should be made ? and can we con- ceive a revelation made or attested except by miracles? This is, briefly; the philosophical foundation upon which Paley has based the direct •evidences of the Christian history ; and ex- perience has amply confirmed the •wisdom of his method, for every shaft from the critical armoury levelled against historical Christi- anity for the last fifty years is inevitably turned and blunted by one who can hold up before his historical faith this shield of funda- mental beliefs : lower this shield, and the storm of criticism finds fatal entrance, and leaves scarce a recognizable vestige of fact in all the Gospel history and the series of Apostolic writings. None will be found to receive the general results of Straussian or any other yet discovered •metho of destructive criticism upen the facts of Christianity, but those who are consciously or uncon- sciously Anti-Supernaturalists. And these may be divided into the class which, devoted to physical researches, and accustomed

Bases of Belief : an Examination of Christianity as a Divine Revelation, by the Light of recognized Facts and Principles. In four Parts. By Edward Midi, M.P.

Published by Hall, and•Co. therefore to the direct evidence of their senses, or to the equally convincing proof derived from generalizations of such di:2ot evi- dence, habituate themselves to deny or at least undervalue all perception that is not resolvable into one or other of these sources of positive science ; and into the more numerous class which finds in action either of pleasure or business objects sufficient to fill up their time, to engage their sympathies, and to absorb their hopes. It is useless to present to either of these classes the direct evidences of historical Christianity without a pre- liminary preparation, mainly directed—in the first, to showing that much of the knowledge by which we do actually live and guide ourselves is not and cannot be obtained but by as- sumptions quite as much beyond the limits of inductive logic as the assumptions implied in a recognition of the historical evidence of Christianity—and in the second, by displaying the pro- vision made by Christianity for wants of our nature which the ac- tion of a busy world tends to deaden, but which will in the end as- sert their importance by revulsions of personal unhappiness, by the sense of unfulfilled destiny, and often by frightful social disorgani- zation. The object in the former case is to show an intellectual in- consistency between the concessions which the positive philosophers make to a higher than physical order of the universe in their daily acts and daily speech, and their refusal to admit ordinary historical evidence of the series of facts which centre round the life and person of Jesus, because those facts would bear witness to this higher order. In the latter case, the appeal is more directed to the heart—more intended to awaken a sense of a higher nature in man than is to be satisfied without a belief in the personal care and love of a superintending Deity, without a close and loving communion with the Father of Spirits. We may say that in the one case the intellect has to be shown that its own processes involve a recog- nition of all that is asked as the essential condition of the credibi- lity of Christianity ; in the other, that the sensuous emotional na- ture has to be startled from the complacency with which it rests upon the passing objects supplied by the material universe and the temporary interests of earthly life. To show by analysis of the human mind, by an investigation into the ordinary processes of belief, that Christianity makes no abnormal demand upon the in- tellect, but simply requires the honest exercise of its healthy functions—that faith, in a word, is the highest science—is an achievement of philosophy often attempted, often partially successful, but yet remains to be perfected by one who to an absolute and implicit belief shall unite a profound and sympathetic knowledge of the causes of unbelief in others. It is undeniably the portion of Christian apologetic which de- mands the rarest combination of powers, and is as yet most de- fective. Plato, Coleridge, and Kant, would not be more serviceable appliances towards the solution of this grand problem than Locke, Condillac, Mill, and Comte. To this sort of work Mr. Miall has no pretensions. It is rather to the other division of the subject that he addresses himself ; though in passing he states well enough the current answer to Hume's objection to miracles as being a contra- diction of experience—that they are only so on the assumption that they are themselves to be excluded with a crowd of other hu- man beliefs from the experience appealed to. But his object is mainly to impress his readers with the feeling that man needed Christianity; that a revelation of God in the person of a man, en- tering into the relations of life, and subject to all its trials and temptations, was necessary to enable man to realize the love and righteousness of God, and so to maintain that spiritual communion with God which chiefly purifies and elevates his nature, and in- sures his highest happiness. And it is to the prominence which Mr. Miall has given to this special characteristic of the Christian revelation that his book will owe its usefulness and popularity. Paley talks of the necessity of the knowledge of a future state dependent upon man's behaviour in this life, and rests the probability of revelation mainly upon this; appealing, in accordance with his whole philosophy, to what has been since called enlightened selfishness—urging men to believe because they cannot be safe without such a revelation. The distino- tion is perhaps more verbal than real, more in the tone and manner than in the matter of the plea. But it is in accordance with the current of speculative philosophy in our times that Mr. Miall should deviate so far from Paley's sketch as to make the awakening of man's spirit, and the revelation of God as a person to be loved and communed with, the great aim of Christianity— not the mere infusion into our earthly life of such influence as comes from believing that a future state of rewards and punish- ments awaits us, dependent upon our conduct here. This differ- ence of our ideas from those to which Paley gave the principal importance has certainly the effect of investing religion with a purer and more elevated aspect; and this effect comes out with unmistakeable power in Mr. Miall's book. We are nowhere tempted to exclaim, as we constantly are when reading Paley, that it is all a matter of bargain, and if we choose to take the consequences of disbelief, or to lead oriminal lives, we may be fools,

i but not anything worse—for moral sentiment is cut out from his scheme.

If Mr. Miall had confined himself more to what is really the onl part of his book which has any freshness—the stress which he laps upon the revelation of God in Christ, as of a man to men, and the fitness of this to the wants of our nature as known by analysis, personal experience, and the testimony of history—he would have written a far more interesting and useful treatise. As it is his style is so diffuse, that when employed on worn topics it becomes wearisome ; and but for the candour and good temper of his book, we could hardly have got through it.