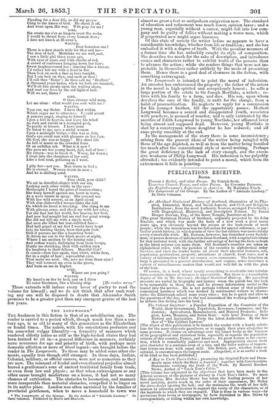 THE LONG WOODS. * THE freshness in this fiction is that

of an antediluvian age. The reader is carried to a period which, though much less than a cen- tury ago, is as old to many of this generation as the Elizabethan or feudal times. The nabob, with his ostentatious profusion and his somewhat vulgar liberality—a formality of manners which rendered elderly ladies as stiff as the high-backed chairs they had been trained to sit in—a general difference in manners, certainly more reverence for age and priority of birth, with perhaps more domestic affection or more of blood regard—are brought before the reader in The Longwoods. To these may be added some other ele- ments, equally true though still stranger. In those days, Indian, Colonial, military, or official careers, were not so numerous as they are now. The remnant of feudal and even classical prejudice almost barred a gentleman's sons of ancient territorial family from trade, or even from law and physic ; so that when extravagance or any other cause brought misfortune on a house, it had not so many chances of extrication. The obstacles to locomotion, and manners more insuperable than material obstacles, compelled it to linger on in its native place. London was often unvisited by the families of provincial gentlemen, when to move a household to town was • The Longwoods of the Grange. By the Author of "Adelaide Lindsay." In three volumes. Published by Hurst and Blackett.

almost as great a feat as antipodwan emigration now. The standard of education and refinement was much lower, opinion laser; and young man, especially without a career, might fall into low com- pany and be guilty of follies without making a worse man, which if perpetrated now might argue baseness. Of this state of society the writer before us appears to have a considerable knowledge, whether from life or tradition ; and she has embodied it with a degree of truth. With the peculiar manners of a former time she has unluckily caught its style of composition. She describes too much for the sake of description, and introduces scenes and characters rather to exhibit traits of the persons than to advance the action ; while she renders things that were not im- probable in themselves rather unlikely by the mode of presenting them. Hence there is a good deal of slowness in the fiction, with something extravagant.

The Longwoods is intended to point the moral of indecision. An ancestor has embarrassed the property ; the father of the actors in the novel is high-spirited and scrupulously honest ; he sells a large portion of the estate to Sir Joseph Mortlake, a nabob ; re- tires with his family to a farm, and dies. His son, upon whom devolves the care of the family, is unfit for the charge, from a habit of procrastination. He neglects to apply for a commission for his younger brother, till the opportunity passes ; Herbert Longwood becomes a soured and disappointed youth, associates with poachers, is accused of murder, and is only extricated by the sacrifice of Edith Longwood to young Mortlake, her affianced lover being absent and supposed dead. However, young Mortlake is shot by a countryman whose daughter he has seduced; and all runs pretty smoothly at the end.

In the management of the story there is some inconsistency ; arising from the present ideas of the writer being mingled with those of the age depicted, as well as from the matter being handled too much after the conventional style of novel-writing. Perhaps the great deficiency is the lack of story enough, and the exces- sive weakness of Philip Longwood. His indecision is too palpably obtruded ; too evidently intended to point a moral, which from its extremeness it fails in pointing.