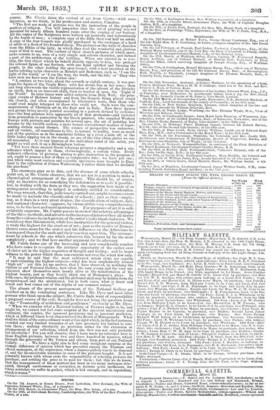 On the 7th August, at Essex House, Port Lyttelton, New Zealand, the Wife of Augustus Edward White, Esq., of a daughter. On the 18th March, in Gloucester Place, the Hon. Mrs. Seton, of a son.

On the 18th, at Downham Rectory, Cambridgeshire, the Wife of the Rev. Frederick Fisher, of a son.

On the 19th, at Burlington House, Mt s. William Cavendish, of a daughter.

On the 19th, in Chester Street, Grosvenor Place, the Wife of Captain Douglas- Calton, R.E., of a daughter.

On the 1st February, at Poonah, East Indies, Frederick Conybeare, Esq., of the. Bombay Horse Artillery, son of the Very Rev. the Dean of Llandaff, to Fanny, eldest daughter of Lieutenant-Colonel Hallett, C.B., of the Bombay Army.

On the 12th November, drowned, at Sydney Harbour, by the upsetting of a boat, Francis Methuen Noel, Mate in H. M. S. Calliope, third sou of the lion. and Rev.. Francis .1. Noel, of Teston, Kent.

On the 8th December, near the residence of his brother, Edward Wood, Esq., J.P., of Pentridge, near Melbourne, by accidentally falling from a gig, the Rev. David Wood, M.A., formerly Curate of St. Peter's, Vere Street, London.

On the 13th March, at Invergordon Castle, Ross-shire, N.B., Roderick Macleod, of Cadboll, Esq., Lord-Lieutenant of the county of Cromarty; in his 67th year. On the 14th, at New Steyne, Brighton, Eleanor, eldest daughter of the late and sister of the present Sir William Domville, Bart.

On the 14th, at North Lodge, Worthing, the Rev. Thomas Wyatt, M.A., Vicar of Wroxton and Balscot, Oxford.

On the 17th, in Connaught Square, Anna Maria Lady Boynton, of Winterton, Lin- colnshire, widow of Sir Griffith Boynton, Bart, of Barmston, Yorkshire, and of the Rev. Charles Drake Barnard, of Bigby, Lincolnshire; in her 90th year. On the 17th, in Montagu Place, Montagu Square, General Sir Robert Barton, K.C.1.1., late of the Second Life Guards; in his 84th year.

On the 18th, at Dane Court, Kent, George William, fourth son of Edward Royd Rice, Esq., M.P., and a Commander in the Royal Navy ; in his 25th year.

On the 18th, at the Parsonage, Shanklin, the Venerable and Rev. Justly Hill, Archdeacon and Commissary of Buckingham, Rector of Tingewick, Bucks, and Bonchurch-cum-Shanklin, Isle of Wight; in his 71st year. On the 18th, at Newport, Monmouthshire, in command of the First Battalion of the Royal Regiment, Lieutenant-Colonel Charles Deane, K.H. On the 18th, at Kirkley Hall, Northumberland, Catherine Hannah, wife of the Rev. John Saville Ogle, D.D.; in her 83d year.

On the 19th, in Saville Row, Burlington Gardens, Mary Matilda, the beloved and affectionate wife of William Imrie, Esq., deeply lamented by all who knew her.