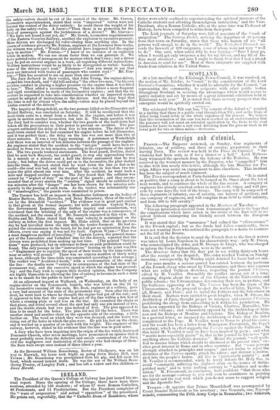 The President of the Queen's College at Galway has just issued his an- nual report. Since the opening of the College, there have been three session; attended by 130 students ; of whom 67 were Roman Catholics, 48 Protestants, and 15 Presbyterians. But the President complains of the " want of cooperation" and actual " opposition " of the priesthood. Be points out, regretfully, that the " Catholic Dean of Residence, whose duties were solely confined to superintending the spiritual interests of the Catholic students and affording them religious instruction," and the Vice- President, also a Roman Catholic, who at the same time was Professor of History, have been compelled to retire from their posts.

The Irish journals of Saturday were full of accounts of the "rush of emigration." The Galway Packet, noticing the departure of 40 persons from that town on Saturday, states that those who hasten off arc "all persons well enough to do in the world." The Watiiford Chronicle re- cords the farewell of 320 emigrants, some of whom were not very " well to do." One said, when asked why he was leaving—" Sure I must go, when I would get only twopence a day for my labour, and my fill of In- dian meal stirabout ; and sure I ought to thank God that I had a friend in America to send for me." Most of these emigrants are supplied with funds from relatives in the United States.