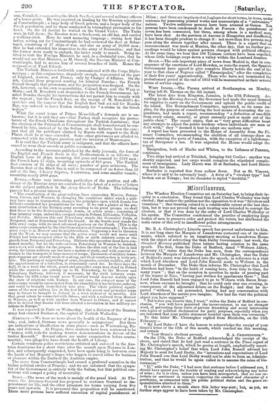 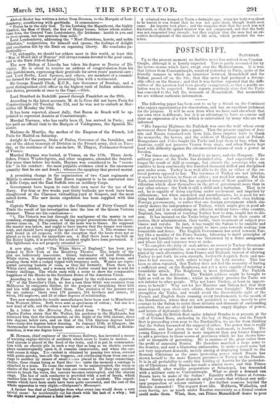 The Windsor Election Committee sat on Saturday last, to bring their in- quiry to a conclusion. They found that Lord Charles Wellesley was duly elected ; that neither the petition nor the opposition to it was" frivolous and vexatious " ; that treating existed to a considerable extent at the last elec- tion, but it was not proved that such treating was intended to corrupt the electors, or that it was done by the order of Lord Charles Wellesley or his agents. The Committee condemned the practice of employing large bodies of men to preserve order and protect the voters, but attributed the main cause of this evil to insufficient police arrangements.

Mr. 11. A. Christopher's Lincoln speech has proved unfortunate to him. It is not long since the Marquis of Lansdowne corrected one of its state- ments, which referred to an imaginary meeting at Lansdowne House with the object of subverting the then Derby Government : last week, the Stamford Mercury published three letters having relation to the same speech. The first, from the Duke of Bedford, dated " Woburn Abbey, February 12," states that the Duke has seen, from the correspondence between the Marquis of Lansdowne and Mr. Christopher, that the Duke of Bedford's name was introduced into the speech,. in reference to a visit which Lord Aberdeen and Lord John Russell made to Woburn in the month of December. The Duke then informs Mr. Christopher that Lord Aberdeen had been "in the habit of coming here, from time to time, for many years " ; that on the occasion in question he spoke of passing part of the winter at Nice, "having just written for apartments there " ; that Lord John Russell had been engaged to go to Woburn with Baron Brun- now, whose excuses he brought ; that he could only stay one evening, in consequence of: the adjourned debate on the Budget ; and that he de- parted "without, I am persuaded, having had any conversation with Lord Aberdeen of the nature you imagine. Nor had his visit the political object you have supposed." " But before you receive this, I trust," writes the Duke of Bedford in con- clusion, " you will have perceived the inconvenience, to use no stronger word, of perverting these visits of private friendship and social intercourse into topics of political declamation for party purposes, especially when you are informed that your public statement founded upon them was erroneous." To this letter Mr. Christopher replied from Bloxholm, on the 15th February-

" My Lord Duke—T have the honour to acknowledge the receipt of your Grace's letter of the 12th of this mouth, which reached me, this morning, and remain

" Your Grace's obedient servant, IL A. CIMISTOPHEIC." On the 17th, the Duke of Bedford acknowledged the receipt of the above, and stated that he had just read a sentence in the Times report of Mr. Christopher's speech; which he quotes at length, emphatically assert ing Mr. Christopher's belief that when Lord John. Russell advised her Majesty to send for Lord Derby, the "intentions and expectations of Lord John Russell was that Lord Derby would-not be able to-form an Adminis- tration, and that he would be again called in to assume the reins of Go- vernment."

"If," adds the Duke, "I had seen that sentence before I addressed you, I should have spared you the trouble of reading and acknowledging any letter of mine ; for it is clear, unless you have been misreported, that we can en- tertain no sentiment in common respecting the conduct and character of a gentleman, as connected with his public political duties and the grave re- sponsibilities attached to them."

It is now above a month since this letter was sent;, but,, as yet, no further steps appear to have been taken by Mr, Christopher. Abd-el-Sailer lies written a.letter from.Broussa, to the Marquis of Lon- donderry, overflowing with,gratitade. It commences,-..

"Praise be.to the only God. To-his-Lordship the Magnificent, the highly Exalted, the Man of Heart, the Key of Happy Issues, before whom misfor- tune fiee. the General:Vane Londonderry, the. Irishman: health to you and to your spouse, not less gracious than noble."

Lord. Londonderry, addressing the "Most illustrious, heroic, and noble Chieftain," reoiproeates, for himself. and spouse . the feelings of delight and exultation felt by the Emir on regaining. liberty. He concludes pa- thetieallp- " If, unhappily, we should but-seldom meet in this world, at least this Kau of Heart and of Honour' will' always remain devoted to the good cause, and to the Emir Alid-el-Kader."

The new Bishop of Lincoln has taken his degree as Doctor of Di- vinity. He is about to receive an address of congratulation from his late parishioners; expressing their gratitude for seven years' pastoral care ; and Lord Derby, Lord Spencer, and others, are members of a commit- tee formed for the purpose of presenting him with a testimonial.

Lord Stratford de Redcliffe passed through Frankfort on the 20th.

According to the latest accounts, M. de la Cour did not leave Paris for Constantinople till Tuesday the 22d, and he was not to embark at Mar- seilles till Monday the 28th.

It has been reported, almost daily, that Baron de Bruck will be ap- pointed to represent. Austria at Constantinople.

Marshal Narvaez, who has really been ill, has arrived in Paris ; and has paid an official visit to the Marquis of Valdegamas, the Spanish Mi- nister.

Madame de Montijo, the mother of the Empress of the French, left Paris for Madrid 'on Saturday.

Arrighi de Casanova, Duke of Padua, Governor of the Invalides, and one of the oldest Generals of- Division in the French army, died on Tues- day, at the residence of his son-in-law, M. Thayer, Postmaster-General of France.

Marshal Haynau was buried, at Vienna, on the 17th. Three Arch- dukes, Prince Windischgratz, and other magnates, attended the funeral. For some time before his death, Haynau was considered to be " eccen- tric" in his conduct : the most palpable evidence cited is the enormous quantity that he ate and drank ; whence the apoplexy that proved mortal.

A promising change in the organization of two Coast regiments of Militia is announced : the East Essex regiment is to be converted into a Rifle Corps, and the East Suffolk into an Artillery Corps.

Government have begun to cure their own meat for the use of the Navy. For four or five weeks past thirty bullocks per week have been slaughtered at the Clarence victualling-yard at Gosport, and the meat salted down. The- new Arctic expedition has been supplied with this beef.

Captain Walker has reported` to the Committee of Privy Council for Trade the result of his investigation into the loss of the Queen Victoria steamer. These are his conclusions- " 1. The Victoria was lost through the negligence of the master in not sounding, stopping the engines, or taking proper precautions when the snow- shower came on. 2. The conduct of the mate was to blame. Ile supposed the master was below, and ought to have known that the danger was immi- nent, and should have stopped the speed of the vessel. 3. The steamer was well found in all respects, with the exception that the boats were not so placed as to be ready for immediate use. 4. Had there been a fog-bell on

i the Bailey Light, it is probable the aecident might have been prevented. 5. The lighthouse was not properly attended to."

M. Herman, chief engineer of the Orleans Railway, has invented a means of warning engine-drivers of accidents which occur to trains in motion. A loud alarum is-placed at the head of the train, and it is put in communica- tion with an electric pile in such a way that as long as an electric current plays uninterruptedly upon it, it remains immoveable, and when the cur- rent ceases it rings. Tee current is obtained by passing two wires, covered with gutta-percha, beneath the waggons, and continuing them from one car- riage to another by means of small e rains placed in the large connecting- chains, these chains being so fixed that the unite the moment a carriage is attached to a train. To cause the current to be uninterrupted, the wires or chains of the last wagon of the train are connected. If then any accident occurs to break the wires, the current becomes interrupted, and the alarum tinge. The box of each conductor is provided with a sort of break, which enables him to remove or break the wire in case of accident. The experi- ments which have been made have been quite successful, and the cost of the whole apparatus is very slight.--Galignanes Messenger.

A farmer has died at Cambridge from what every one would deem a very trivial cause: he accidentally cut his cheek with the lash of a whip ; but alight wound produced :a fatal leek-jaw..

A new play, called "The White Slave of England," has been per- formed in New York at the Broadway Theatre. The details of the plot are ludicrously inaccurate. Grind, taskmaster of Lord Overland's White slaves, is represented as kicking coal-miners with top-boots, and goading them with a cudgel tipped with tenpenny nails. Women are repre- sented carrying baskets of coals, as they did formerly. Then there is a White slave market, and a woman with a halter round her neck is sold for twenty shillings. The whole ends with a scene to show the comparative happiness of the Blacks in the. Southern States of the American Union.

According to a letter in the Times signed by the well-known signature "P." of the Traveller's Club, no less a sum than 90441. was remitted from Melbourne by emigrants thither, for the purpose of furnishing their kith and kin with supplies to follow them. The statistics of the persons sent for are curious : there were 170 parents, 354 brothers and sisters, 25 wives, 102 nephews, and 25 of other degrees of relationship.

Two new materials for textile manufactures have been sent to Manchester from Western Africa. Both were sent as specimens of cotton ; but one is a new kind of silk, and the other a new kind of wool.

A criminal was hanged at Turin a fortnight ago; when his body was about to be buried it was found that he was not quite dead, though death soon came. An inquiry took place ; and the surgeons state that the neck was not fractured, so that the spinal marrow was not compressed, and that the body wee not suspended long enough : but they explain that the man had an ex- cessive development of the muscles of the neck, which protected the ver- tebrai.