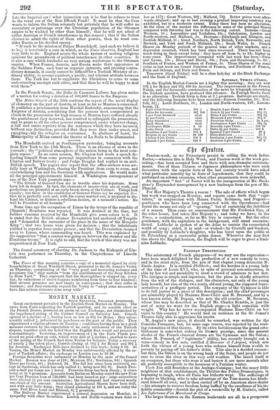 Passion-week, as we Protestants persist in calling the week before Easter,—whereas this is Holy Week, and Passion-week is the week pre- ceding,—has been occupied here and there with non-dramatic entertain- ments. One of those Chinese or Japanese philosophers who were such favourites with the esprits forts of the last century would have asked what particular sanctity lay in feats of legerdemain, that they could be performed on solemn occasions, when other amusements were unlawful_

An important " fact" of Easter will be the inauguration of Mr. Buck- stone's Haymarket management by a new burlesque from the pen of Mr. Planche.

For Her Majesty's Theatre a rescue 1 The sale of effects which began last week was stopped on Monday, and reports came forth that "capi- talists," in conjunction with Messrs. Puzzi, Robinson, and Nugent— gentlemen who have been long connected with the Operahouse—had found the means not only of "opening," but of sustaining the liabilities of a season. Then came an announcement that Mr. Frederick Gye, of the other house, had taken Her Majesty's ; and today we have, in the Times, a contradiction, so far as Mr. Gye is concerned. But the other gentlemen, with the capitalists in the background, still stand uncontra- dieted. Lablache is spoken of as the Atlas to sustain the resuscitated world of song ; aided, it is said—or wished—by Cruvelli and Gardoni, and possibly by Lablache's daughter, who has burst upon the public at St. Petersburg as a successful prima donna. Wherever she may first rise above the English horizon, the English will be eager to greet a femi- nine Lablache.