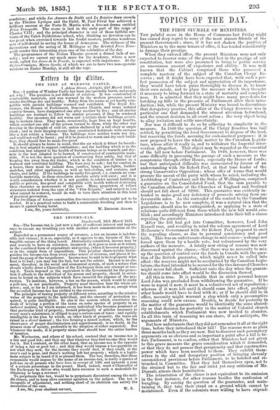 SIR—The Income-tax is just now a topic of sufficient interest and import- ance to excuse my troubling you with another short communication on the subject. Regarded as a permanent source of revenue, a tax on income is indefen- sible and vicious; it is so, especially, as it appears to me, because of the in- tangible nature of the thing taxed. Abstractedly considered, income may be said scarcely to have an existence, inasmuch as it goes as soon as it comes, in the combined form of expenditure and saving, (when it becomes property,) or in the simple form of expenditure. This peculiar characteristic distin- guishes the Income-tax from every other source of revenue, and places it be- yond the grasp of the taxgatherer. Income may be said to be to property what heat is to fuel; you may tax the fuel, but not the caloric. Income is an ele- ment, therefore, in the social and economical system, of such a nature that should wholly deter a Chancellor of the Exchequer from any attempt at tax- ing it. Taxes imposed as the equivalent to the Government for the protec- tion it affords to the individual of his person and property, should in strict- ness be levied on the subjects which have incurred the expense of the pro- tection. To institute, however, a tax on the person, which would be really a poll-tax, is not practicable. Property must therefore bear the whole ex- pense; and, so far as I am informed, it has been made to do so, except what the so-called Income-tax has yielded to the revenue. The principle of taxing property at different rates, according to the relative value of the property, to the individual, and the amount of protection re- quired, is quite intelligible. So also is the system which constitutes the mode of levying a portion of the taxes on some species of property in an indirect manner, by which means every individual who becomes possessed of that particular kind of property, formed principally of articles necessary to every man's subsistence, is obliged to pay a certain sum of taxes : and equally intelligible is the plan by which, on other kinds of property, the taxes are raised in a direct manner ; the two forming a mixed system, which, by the observance of proper discrimination and apportionment, is no doubt, in the present state of society, preferable to the adoption of either separately. But whatever the mode, it is property alone that should bear the entire burden of taxation.

Mr. Warburton, and others of his school, contend that an income-tax is a fair and good tax ; and they say that wherever they find income they would tax it. But I contend, on the other hand, that an income-tax is the opposite of being a fair or good tax ; and that they would impose a tax-payment on not what they seek, for the income they mould find, if they could, at the year's end is gone, and there's nothing left but property ; which is a legiti- mate subject to be taxed if it so pleased them. The tax, therefore, that these economists would impose by the name of an income-tax, is really a species of poll-tax on all persons who hare been in receipt of 1501. and upwards a year of a certain percentage in the pound. Hard, indeed, must a Chancellor of the Exchequer be driven who would have recourse to such a makeshift for obtaining so large a revenue !

To perpetuate this tax, would be to perpetuate discontent among the mid- dle classes, and to keep alive constant agitation on the subject. The tax is incapable of adjustment, and nothing short of its abolition can satisfy the necessities of the case.