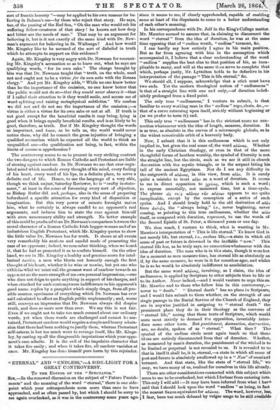 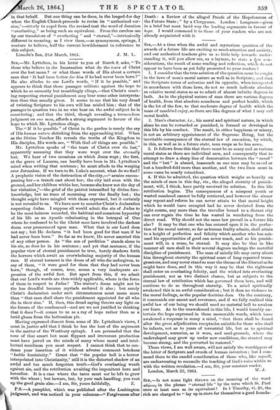 To THE EDITOR OF THE "SPECTATOR."

131n,—In the renewed discussion on the subject of" Future Punish- ments" and the meaning of the word "eternal," there is one side- point which your correspondents seem more than once to have approached, and as often passed by, but which I should be sorry to see again overlooked, as it was in the controversy some years ago, since it seems to me, if clearly apprehended, capable of enabling some at least of the disputants to come to a better understanding of each other's meaning.

In his correspondence with Dr. Jell in the King's College matter. Mr. Maurice seemed to assume that, in.elaiming to disconnect the word " eternal " from the idea of duration, he was at the same time opposing that of "endless wrath, "endless" torment, &c.

I can hardly say how entirely I agree in his main position. But so far from agreeing with him in the assumption which accompanied it, I believe that a clear understanding of the word " endless " supplies the best clue to that position of his, so inex- plicable to many, and will at the same tine serve to complete that which, perhaps justly, Mr. Lyttelton holds to be defective in his interpretation of the passage "This is life eternal," &c.

We should all, I suppose, acknowledge that a stick must have two ends. Yet the modern theological notion of " endlessness " is that of a straight line with one end only,—of duration indefi- nitely prolonged from a fixed point.

The only true "endlessness," I venture to submit, is that familiar to every working man in the " endless " rope, chain, &A.,— that of a curve returning upon itself, strictly without beginning or (as we prefer to term it) end.

This only true " endlessmes " has in the strictest sense no con- nection whatsoever with the idea of length, measure, duration. It is as true, as absolute in the curves of a microscopic globule, as in the widest conceivable orbit of a heavenly body.

Now, I submit that it is this endlessness which is not only implied in, but gives the real sense of, the word ahLyloc. Whether in the early Christian theology, or even in that of the more thoughtful forms of heathen worship, the symbol of Eternity is not the straight line, but the circle, such as we see it still in church decoration with the mystic triangle, or in the serpent biting his tail of the ancient Egyptians. Nor do I see any difficulty in. the outgrowth of aft:mos., in this view, from alc:Jr. It is surely quite a mistake to treat atc:.w as a word of duration. It seems to me in direct opposition to xp6vo;., which is such a word ; to express essentially, not measured time, but a time-cycle. The phrase Efe ro.s.s cf,Syns rbis, atWvant appears to me quite inexplicable, except by the conception of a series of such cycles. And I should firmly hold to the old derivation of ate', from ad-fty, the "always being," i.e., never beginning, never ceasing, as pointing to this true endlessness, whether the aieum itself, as compared with duration, represent, to use the words of the Second Epistle of St. Peter, a thousand years or one day.

We thus reach, I venture to think, what is wanting in Mr. Maurice's interpretation of" This is life eternal." To know God is not merely life, but eternal, i.e., endless life,—a state in which all sense of past or future is drowned in the ineffable "now." This eternal life has, as he truly says, no connection whatsoever with the idea of duration. The man who is in this state, though it were but for a moment as men measure time, has eternal life as absolutely as if, by the same measure, he were in it for countless ages, and whilst he is so he wou14: be absolutely indifferent to annihilation.

But the same word attheoe, involving, as I claim, the idea of endlessness, is applied by Scripture to other subjects than to life or to its Author. Never indeed,—and I would venture to urge this on Mr. Maurice and to those who follow him in this controversy,— never to "death." "Eternal death" has no place in Scripture, and I would fain submit to them whether, on the strength of one single passage in the Burial Service of the Church of England, they are in anywise justified in assigning to "eternal death" the prominent place they do in their theology as the converse of "eternal life," seeing that those texts of Scripture, which would. seem most strictly to demand the opposition, invariably intro- duce some other term. But punishment, damnation, destruction, are, no doubt, spoken of as "eternal." What then ? The symbol of the endless circle must again teach us that these ideas are entirely disconnected from that of duration. \h ether,. as measured by man's duration, the punishment of the wicked is to be limited or perpetual is not revealed to us. It is revealed tons that in itself it shall be, it is, eternal,—a state in which all sense of past and future is absolutely swallowed up in a "Novi' of unmixed torment. And that state, like the state of "eternal life," we may, we have many of us, realized for ourselves in this life already.

There are other considerations connected with this subject which seem to me to be overlooked, but which I forbear from entering into. This only I will add :—It may have been inferred from what have said that I should look upon the word "endless "as being, in fact the nearest Saxon equivalent for ateirms. The word, however, has, I fear, been too much debased by vulgar usage to be still available

in that behalf. But one thing can be done, in the longed-for day when the English Church proceeds to revise its "authorized ver- sion,"—utterly to expel from the revised text the word of duration "everlasting," as being such an equivalent. From the careless use by our translators of "everlasting "and "eternal,"—intrinsically different in meaning, as I view them,—as synonymous, springs, I venture to believe, half the current bewilderment in reference to this subject.