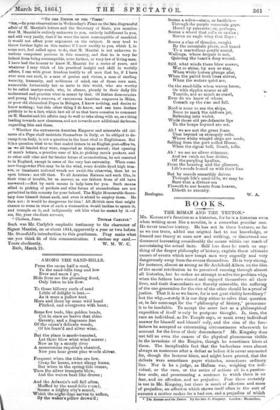 "To THE EDITOR OF THE TEM.'

"Sra,—In your observations in Wednesday's Times on the /ate disgraceful affair of M. Mazzini's letters and the Secretary of State, you mention that M. Mazzini is entirely unknown to you, entirely indifferent to you, and add very justly, that if he were the most contemptible of mankind it would not affect your argument on the subject. It may tend to throw further light on this matter if I now certify to you, which I, in some sort, feel called upon to do, that M. Mazzini is not unknown to various competent persons in this country, and that he is very far indeed from being contemptible, none farther, or very few of living men. I have had the honour to know M. Mazzini for a series of years, and whatever I may think of his practical insight and skill in worldly affairs, I can with great freedom testify to all men that he, if I have ever seen one such, is a man of genius and virtue, a man of sterling veracity, humanity, and nobleness of mind, one of those rare men, numerable fortunately but as units in this world, who are worthy to be called martyr-souls, who, in silence, piously in their daily life understand and practise what is meant by that. Of Italian democracies and young Italy's sorrows, of extraneous Austrian emperors in Milan, or poor old chimerical Popes in Bologna, I know nothing, and desire to know nothing ; but this other thing I do know, and can here declare publicly to be a fact, which fact all of us that have OCCalii0/1 to comment on M Mazzini and his affairs may do well to take along with us, as a thing leading towards new clearness, and not towards now additional darkness, regarding him and them.

"Whether the extraneous Austrian Emperor and miserable old chi- mera of a Pope shall maintain themselves in Italy, or be obliged to de- camp from Italy, is not a question in the least vital to Englishmen. But ills a question vital tons that sealed letters in an English post-oftice be, as we all fancied they were, respected as things sacred ; that opening of men's letters, a practice near of kin ,to picking men's pockets, and to other still viler and far fataler forms of scoundrelism, be not resorted to in England, except in cases of the very last extremity. When some new Gunpowder Plot may be in the wind, some double-dyed high trea- son, or imminent national wreck not avoidzble otherwise, then let us open letters : not till then. To all Austrian /Wears and such like, in their time of trouble, let us answer, as our fathers from of old have answered :—Not by such means is help here for you. Such means allied to picking of pockets and viler forms of scoundrelism are not permitted in this country for your behoof. The Right Honourable Secre- tary does himself detest such, and even is afraid to employ them. He dare not : it would be dangerous for him ! All ,British men that might chance to come in view of such a transaction would incline to spun it, and trample on it, and indignantly ask him what he meant by am, Sir, your obedient servant,

Such was Mr. Carlyle's emphatic testimony to the character of Signor Mazzini, on or about 1844, apparently a year or two before Mr. Stansfeld's introduction to this gentleman. Pray make what use you think fit of this communication. I enclose my card.—