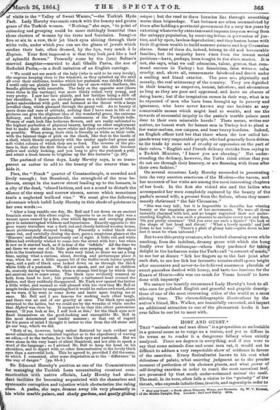 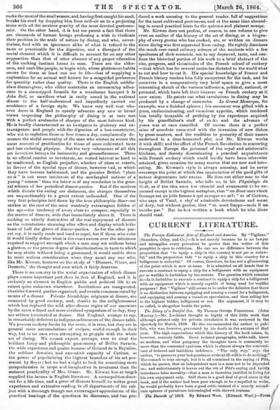 THAT "animals eat and man dines" is a proposition so undeniable in a general sense as to verge on a truism, and yet so diffuse in its terms as to render it a dangerous fallacy when strictly analyzed. There are degrees in everything, and if one were to say that some animals dine and some men eat, it would not be difficult to adduce a very respectable show of evidence in favour of the assertion. Every floriculturist knows to his cost what delicateue of palate, what unerring judgment as to the precien moment of perfection of his choicest plants, and what power of self-denying exertion in order to reach the most succulent leaf, are possessed by that much under-estimated animal the snail. The snail, in its turn, often falls a victim to the "gulosity" of the thrush, who expends infiuitetime, trouble, and iugenuityin order to * Had and Gued ; a Book about Dinners, Wines, and Dessert& By W. V. KIM;

make the most of the snail season, and, having first caught his snail, breaks his shell by dropping him from mid-air on to a projecting stone with all the anxious gravity of the most devoted gastrono- mist. On the other hand, it is but too patent a fact that there are thousands of human beings professing a wish to vindicate their position in the scale of nature by dining, and who, never- theless, feed with an ignorance alike of what is refined to the taste or practicable for the digestion, and a disregard of the social element which it is difficult to account for on any other supposition than that of utter absence of any proper education of the cooking instinct latent in man. There are the alder- men, and such like people, to begin with, whose gluttonous habits secure for them at least one use in life—that of supplying a euphemism for an animal well known for a misguided preference for quantity rather than quality. There is the English middle- class dinner-giver, who either maintains an unreasoning adher- ence to a stereotyped formula for a wearisome banquet h La John Bull, or sacrifices what is really sound in the national dinner to the half-understood and imperfectly carried out semblance of a foreign style. We know very well that who- ever dares in England to openly advocate any new or broad views respecting the philosophy of dining is at once met with a perfect avalanche of charges of the most heinous kind. He is loudly characterized as an instigator to gluttony and ex- travagance, and people with the digestion of a boa-constrictor, who eat to repletion three or four times a day, complacently de- nounce the sinful sensuality of the man who wishes to secure the same amount of gratification for those of more cultivated taste and less enduring physique. But the very vehemence of all this set 'invective betrays its insincerity and groundlessness. There is no official routine so inveterate, no vested interest so bard to be eradicated, as English prejudice, whether of class or coterie, in favour of the special type of dinner, however had, to which they have become habituated, and the genuine British "plain cook" is not more intolerant of the newfangled notions of a young "misses" than the latter is of any revolution in the gene- ral scheme of her periodical dinner-parties. But if the motives which dictate the eating are dishonest, the charges themselves are unquestionably to a great extent unfounded. One of the very first principles laid down by the true philosophic diner-out strikes at the root of the most wantonly extravagant foibles of the age—the tendency of every class to compete, especially in the matter of dinners, with that immediately above it. There is nothing so utterly destructive of the real enjoyment of dinners as the ostentatious straining after effect and display which is the bane of half the givers of dinner-parties. As for the other par- rot cry, it is easily made and hard to repel, but if those who raise it would kindly define what is the exact excess over the minimum required to support strength which a man may eat without being a glutton, or the precise degree of discrimination in taste to which he may attain without being a gourmand, it would entitle them to more serious consideration when they assail any one who, like Mr. Kirwan, bestows on the study of "Dinners, Wines, and Desserts," the thought and care which it fairly deserves.

are seldom terminated-at dinner. But England, strange to say,

is remarkably deficient in indigenous literature of the dinner-table. We possess cookery-hooks by the score, it is true, but they are in general mere accumulations of recipes, useful enough in their way, but in no case even attempting to grapple with the whole art of dining. We cannot expect, perhaps, ever to rival the brilliant fancy and philosophic gastronomy of Brillat Savarin, the wide experience and quaint humour of Grimed de la Reyniere, the sublime devotion and executivh capacity of eareme, or the power of popularizing the highest branches of his art pos- sessed by Sever; but we had a right to look for something more comprehensive in scope and imaginative in treatment than the

eminent practicality of Mrs. Gla£183. Mr. Kirwan has at length

supplied the lacuna in English literature. A cosmopolitan diner- out for a life-time, and a giver of dinners himself, he unites great

experience and extensive reading in all departments of his sub- ject with a thorough though not extravagant appreciation of the practical beatings of the questions he discusses, and has pro- duced a work amusing to the general reader, full of suggestions for the most cultivated gastronome, and at the same time abound- ing in sound practical hints for the quietest and plainest menage.

Mr. Kirwan does not profess, of course, in one volume to give even an outline of the history of the art of dining, or a biogra- phy of every genius who has cooked, ate, or written on dinners since dining was first separated from eating. He rightly dismisses the much over-rated culinary science of the ancients with a few specimens of their eccentric, not to say depraved, taste, and con- fines the historical portion of his work to a brief abstract of the rise, progress, and viciseitudes of the French school of cookery —that which has for several centuries dictated to the world what to eat and how to eat it. His special knowledge of France and French history renders him fully competent for the task, and he contrives in a comparatively very brief space to give a most interesting sketch of the various influences, political, national, or, personal, which have left their impress on French cookery as it now exists. He points out what revolutions in dining may be produced by a change of monarchs. Le Grand Monarque, for example, was a finished epicure ; his successor was gifted with a gross, undiscriminating, and voracious appetite, which rendered him totally incapable of profiting by the experience acquired by his grandfather's staff of cooks and the advance of years was at once cancelled. Of course there is a perfect mine of anecdote connected with the invention. of new dishes_ by great masters, and the tradition to posterity of their names enshrined in a time-honoured plat, and Mr. Kirwan works- it With skill; and the effect of the French Revolution in scattering throughout Europe the personnel of the royal and aristocratic kitchens, and thereby disseminating a practical acquaintance with French cookery which could hardly have been otherwise attained, gives occasion for many stories that are new and inter- esting. Mr. Kirwan's style is always amusing, and be never oversteps the point at which due appreciation of the good gifts of nature degenerates into excess. He does not either soar to the- height of Brillat Savatin, who tells us, in his Physiologie Guilt, as if the idea were too etherial and evanescent to be ex- pressed except in the highest metaphor, that "tin diner sans vieux fromage eat un jolie femme is qui maeque un coil; "or of Careme,. who says of Vatel, a chef of admirable devotedness and sense, of duty, but without genius, that " sa mort frappo—mais il no touche pas." But he hos written a book which he who dines should read.