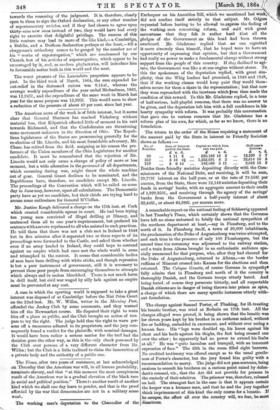 Page 2, 26 March 1864 — A remarkable report on the national feeling of Schleswig appeared
Close

A remarkable report on the national feeling of Schleswig appeared

in last Tuesday's Times, which certainly shows that the Germans have left no stone unturned to falsify the national sympathien of the northern department at least,--say in Flensborg, and to the north of it. In Flensborg itself, a town of 20,000 inhabitants, the proclamation of the Duke of Augustenburg was twice attempted, and each time in the presence of only 100 Flensborgers, but the second time the ceremony was adjourned to the railway station, and a train from Altona brought in an enthusiastic audience spa- cially summoned for that purpose, who, after they had cheered for the Duke of Augrustenburg, returned to Aliona,—as the border ruffins of Missouri crossed into Kansas for the elections and then returned. The Cologne Gazette, of course German in sympathyll fully admits that in Flensborg and north of it the country is thoroughly Danish, and the German troops utterly hated. And being hated, of course they persecute bitterly, and all respectable Danish citizens are in danger of being thrown into prison as spies, a charge of which there are many specific instances utterly with- out foundation.