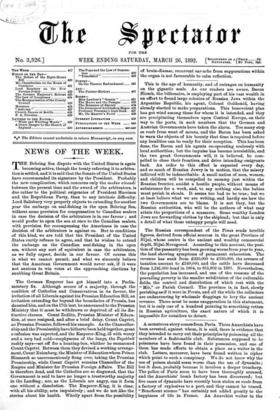 THE Behring Sea dispute with the United States is again becoming active, though the treaty referring it to arbitra- tion is settled, and it is said that the Senate of the United States have recommended its signature by the President. Probably the new complication, which concerns only the modus vivendi between the present time and the award of the arbitrators, is due rather to the political exigencies of President Harrison and the Republican Party, than to any intrinsic difficulty. Lord Salisbury very properly objects to extending for another year the embargo on seal-fishing in the open Behring Sea, without some provision for compensation to Canadian sealers in case the decision of the arbitrators is in our favour ; and would prefer to open the sea at once to the Canadian sealers, with provision for recompensing the Americans in case the decision of the arbitrators is against us. But to conditions of this kind, we are told that the President of the United States curtly refuses to agree, and that he wishes to extend the embargo on the Canadian seal-fishing in the open sea, without any sort of equivalent in case the arbitrators, as we fully expect, decide in our favour. Of course this is what we cannot permit, and what we sincerely believe that the American Government would never ask, if it were not anxious to win votes at the approaching elections by snubbing Great Britain.